Who are some of the closest lookalike mother-daughter duos in Hollywood? What about father-son, or father-daughter, or even mother-son pairs? 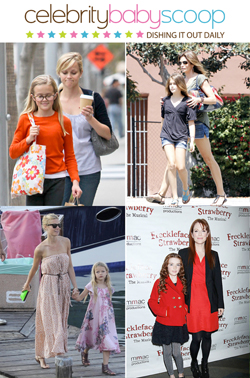 Celebrity Baby Scoop takes a look through 15 celebrities and their spitting images. From Reese Witherspoon and daughter Ava, to the late Heath Ledger and daughter Matilda, to Gwyneth Paltrow and daughter Apple, take a look at Tinseltown’s mini mes.

Reese Witherspoon and her 13-year-old daughter Ava might be the closest lookalike pair in Hollywood! Reese and her 8-year-old son Deacon also look similar, but we think he looks more like papa Ryan Phillippe. No?

Cindy Crawford are her 11-year-old daughter Kaia are a close second to Reese and Ava. This gorgeous mother-daughter duo are spotted all over Los Angeles in their funky duds. Not to mention, Kaia’s 13-year-old brother Presley and dad Rande Gerber are just as beautiful.

Gwyneth Paltrow‘s daughter is the apple of her eye! There’s no doubt about it, Apple, 8, looks just like her mama! Gwyneth and her husband Chris Martin are also parents to 6-year-old son Moses, another close lookalike for the stunning actress.

Tina Fey has a mini me: her 7-year-old daughter Alice! Tina and her longtime love, husband Jeff Richmond, are also parents to 1-year-old daughter Penelope. We hope to see more of Tina’s baby to see if she is also the spitting image of her hilarious mama.

Julianne Moore and her 10-year-old daughter Liv are one of the cutest mother-daughter duos in Hollywood! We love this redheaded pair who look so much alike. Julianne and her husband Bart Freundlich are also parents to 14-year-old son Cal — not so much of a resemblance there!

Adam Sandler and his 6-year-old daughter Sadie look so much alike, that she was cast to play his young identical twin sister in his movie Jack and Jill! Adam and his wife Jackie are also parents to 3-year-old daughter Sunny, who also looks a lot like her funny dad.

Mark Consuelos and his 15-year-old son Michael have often been called one of the closest father-son lookalikes in Hollywood. Mark and his lovely wife Kelly Ripa are also parents to daughter Lola, 11, and son Joaquin, 9, but we don’t see the strong resemblance with the younger two. Do you?

Teri Hatcher and her 14-year-old daughter Emerson are such a pretty pair! The lookalike mother-daughter duo seem like the best of friends and are often seen out lunching and shopping together. Emerson is Teri’s only child, whom she had with ex-husband Jon Tenney.

Heidi Klum and her 8-year-old daughter Leni are blonde beauties! Often seen at the playground, out for lunch or just strolling in SoHo, Heidi’s oldest child is definitely her mini me. Heidi and estranged husband Seal are also parents to sons Henry, 6, Johan, 5, and 2-year-old daughter Lou.

Angelina Jolie seems to have passed down her luscious lips and overall stunning good looks to her 4-year-old daughter Vivienne. There’s no question that her other biological children – Vivienne’s twin Knox and 6-year-old daughter Shiloh – also look like her, but we think the strongest resemblance is with Vivi? No?

Jennifer Garner finally got her boy, and we think he’s the spitting image of mama! Baby Samuel, 6 months, seems to have Jen’s beautiful eyes. While big sisters Violet, 6, and Seraphina, 3, also look like mom, we think Jen’s boy looks most like her.

Heath Ledger died too soon at the age of 28. But before his tragic passing, he welcomed a daughter, Matilda, with actress Michelle Williams. Now nearly 7, Matilda is the spitting image of her late father. May his memory live on in her beautiful smile!

Britney Spears‘ boys – Sean Preston, 7, and Jayden James, 6 – are both little lookalikes to their gorgeous mama! It seems the boys have gotten their mother’s good genes, making them some of the cutest celebrity kids around. The boys’ father is Brit’s ex-husband, former backup dance Kevin Federline.

Uma Thurman‘s 14-year-old daughter Maya could play her younger self in a movie! We recently spotted the pretty pair out with Uma’s newborn daughter and we couldn’t help but notice the striking resemblance. Uma and her ex-husband Ethan Hawke are also parents to 10-year-old son Levon.

Kris Jenner and her infamous daughter Kim Kardashian, 31, are one of the most photographed lookalike duos in Hollywood. The mother-daughter team not only look like each other, they spend countless hours working together on their reality TV show and many other endeavors. Kris’ five other children also share a strong resemblance with the famous matriarch.