It’s been another year of shocking headlines on Celebrity Baby Scoop. 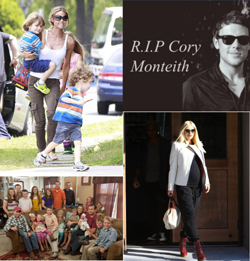 Some stories have surprised us more than others: from tragic deaths of some of Hollywood’s youngest stars like Cory Monteith and Paul Walker; to shocking splits such as Malin Akerman and Roberto Zincone, as well as Miranda Kerr and Orlando Bloom; to exciting pregnancy news from the over 40 club: Halle Berry and Gwen Stefani.

Let’s look through 11 of the most shocking headlines of 2013.

While Hollywood is known for its cheating scandals, we were recently shocked to hear the news from Tori Spelling and Dean McDermott.

The day after Christmas, US Weekly reported that Dean cheated on Tori with 28-year-old Emily Goodhand. ”He told me he and Tori had a sexless marriage,” says Goodhand, who stayed over at his hotel the following night too. “I believed him.”

According to Us, Goodhand claims she met McDermott while he was promoting Chopped Canada in Toronto on December 6. Goodhand goes on to tell the mag they had an affair in his room that same night at the Fairmont Royal York Hotel.

Married since May 2006, Tori and Dean are parents to four kids: Liam, 6, Stella, 5, Hattie, 2, and Finn, 1. In July 2005, Tori and Dean began filming the Lifetime TV movie Mind Over Murder in Ottawa. The two began an affair the night they first met, despite both being married.

After six years of marriage, Zincone filed for divorce on December 2.

Just weeks prior to their divorce news, the CBGB actress opened up about the “huge shift” of motherhood.

“It’s amazing having my first child,” she shared. “I think any woman will say it’s the biggest joy of her life. It makes it OK to wake up at 5:30 in the morning when you see that little face smiling back at you! He’s becoming more and more of a little person with a personality. You’ve made a person. It’s a huge shift from living an active, spontaneous lifestyle.”

The parents to nearly 3-year-old son Flynn announced in October:

“In a joint statement, Orlando Bloom and Miranda Kerr have announced that they have been amicably separated for the past few months. After six years together, they have recently decided to formalize their separation. Despite this being the end of their marriage, they love, support and respect each other as both parents of their son and as family.”

Regarding the sudden split, Orlando said: “We love each other, we’re a family.”

“We’re going to be in each other’s lives for the rest of our lives,” he added. “There’s no question for the sake of our son and everything else, we’re going to support one another and love each other as parents to Flynn.”

The handsome couple were together for three years before tying the knot in 2010.

“And you know,” the actor added, “life doesn’t always works out exactly as we plan or hope for but fortunately we’re both… we’re adults. We love and care about each other and we, most of all, love our son.”

Until recently, Denise Richards was caring for her ex-husband Charlie Sheen‘s 4-year-old sons Max and Bob while their mother, Brooke Mueller, was in rehab. But Denise was forced to give up custody of the boys after struggling to cope with their behavior following visits with their troubled mother.

And now, Denise – mom to daughters Sam, 9, Lola, 8, and Eloise, 2 –  is facing allegations of child abuse. Brooke made the call to the authorities in recent weeks claiming that Denise abused Max and Bob.

“It has been alleged that Denise not only physically abused the children, but neglected them as well,” a source close to the situation said. “This is being taken very seriously by Denise. To say she is upset and disgusted by Brooke’s actions are an understatement.”

The source added: “Social workers might want to interview Denise’s daughters and Denise will fight that. Her daughters don’t need to be dragged into this drama. They are children who are very well cared for and loved.”

“Denise now knows definitively that she made the best decision for her family by giving up being the temporary guardian for Bob and Max,” the insider continued. “The chaos and never-ending drama that follows their lives — because of their mother — just made it impossible for Denise’s own family to exist like a normal one.”

19 Kids and Counting star Michelle Duggar created quite a stir when she opened up to Celebrity Baby Scoop in October, admitting that she and husband Jim Bob are “trying” to conceive a twentieth child.

“I would hope, but we are not expecting right now,” Michelle, 47, said when asked if she was currently expecting.

“I would be so grateful if the Lord blessed us with another one,” she added. “We’re trying at this point and we shall see if that is a possibility. If not, we are so thankful and grateful for the ones that God has given us so far. We are also definitely enjoying our grandbabies! They are so precious!”

At age 44, No Doubt frontwoman Gwen Stefani and husband, fellow rocker Gavin Rossdale, expect their third child next year. They are also parents to sons Kingston, 7, and Zuma, 5.

Although she remains mum on her pregnancy news, A-list pals Rachel Zoe and Eve have confirmed Gwen’s happy news.

In 2010, the pop superstar opened up about the possibility of having a daughter.

“Having children is the hardest thing I’ve ever done,” Gwen said. “No one could have prepared me for how awesome it is and how hard. And having two boys – there’s a lot of energy. I mean, it does seem weird that I don’t have a girl, but I feel like I’m running out of time. I also don’t want to spread myself so thin that I can’t even be good for them… Poor Zuma, he’d be the middle guy. I’m not focusing on it right now, but it’s not up to me anyway, you know? These things are miracles, so we’ll see. Otherwise, the clothes are probably going to go to some girlfriend of Kingston’s!”

In April, Halle announced the pregnancy saying it was “the biggest surprise of [her] life.”

“Thought I was kind of past the point where this could be a reality for me,” she said at the time. “So it’s been a big surprise and the most wonderful.” She went on to say the pregnancy was a “miracle.”

“I feel really happy. It’s one of the best things that happened in my life, for sure,” she added.

The pair were wed in an intimate ceremony in France this past summer, on July 13.

The blogger, 26, who was in her second trimester, shared the sad news on her blog. “I have been dreading this announcement,” she wrote. “I needed some time before being able to say it. Jack and I lost our baby boy last week.”

“Having a late term miscarriage is by far the hardest thing either of us have ever had to go through,” she continued. “We appreciate all of your prayers and ask for privacy and respect during this time. It’s important to stay hopeful and optimistic through life’s toughest moments. We never know why things like this happen. All we can do is trust in God and know he has a plan for our lives.”

In early August, Lisa announced their pregnancy news. “Jack and I are super excited to share with you all that we are expecting our second baby!” she shared. “I am in my second trimester, feeling great & trying not to eat everything in sight.”

The couple were wed last October and are parents to daughter Pearl, now 20 months.

The world was shocked by the death of Cory Monteith, the 31-year-old star of Glee who was found dead in his Vancouver hotel room on July 13. Reports found that he died from a fatal mix of heroin and alcohol.

In a 2011 interview with Parade, Cory discussed his struggles with drug and alcohol addiction, revealing that by age 13, he was skipping school to get drunk and smoke marijuana. By the time he was 16, his drug use was “out of control.”

“Anything and everything, as much as possible,” he admitted. “I had a serious problem.”

Known for his famous role on The Sopranos, James Gandolfini died in Italy on June 19 after suffering from a heart attack.

The actor left behind his wife Deborah, son Michael – who reportedly found the actor still alive in his Rome hotel room – and infant daughter Liliana, then 9 months.

Actor Paul Walker died in a fatal car crash on November 30. The Fast and Furious star, 40, left behind a 15-year-old daughter Meadow Rose.

“I just shut up, sit back and stay quiet,” he said in 2011, about driving his daughter to school. “She opens up and reveals a whole lot. The trick is to not ask questions, just listen. I’m figuring it out.”

Walker and friend Roger Rodas both died in a Porsche Carrera GT after attending a charitable event. Sources say that Meadow was on hand to support her dad at his Reach Out Worldwide charity car show in Santa Clarita, Calif. just minutes prior to the deadly crash.

Walker dated Meadow’s mother, Rebecca McBrain, when he was in his mid-20s.

“It was tough,” he recently said of not being ready for marriage at the time. “I was one of those ones who believed when you get married it’s forever. But I was thinking down the road. I knew where I was at with chicks and having fun … I was an animal.”

Meadow spent her early years living in Hawaii with her mom, but Walker and his ex shared custody and Meadow. When she was 7, the proud papa taught his girl how to surf. “Every day I pick her up from school and we go out on a longboard,” he said in 2006. “She really loves it.”