Wendy Williams to CelebrityBabyScoop: “I’ve Had 3 Miscarriages; It Was A Nightmare” 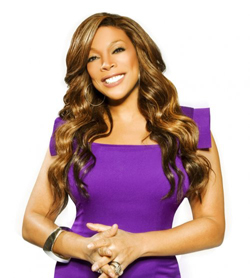 The Wendy Williams Show just kicked off it’s third season with some fabulous guests such as Tamera and Tia Mowry, Roseanne Barr and Kate Gosselin. The host of the popular daytime show, New York Times bestselling author Wendy Williams, promises a fun season ahead: “Fashion shows, people we like and who we should like…an eclectic mix of celebs.”

The mom-of-one opens up to Celebrity Baby Scoop about her “very handsome” 11-year-old son Kevin, her struggles with having more biological children and her thoughts on expanding the family: “My mind is on adoption.”

CBS: Tell us about your son Kevin. How old is he? What is he into?

WW: “He is 11-years-old. We just celebrated his birthday in August while we were on a 16-city tour promoting the show. He’s already 5’7”, he’s in the 6th grade and he’s very handsome. I don’t know how this happened – I only breastfed for 2 weeks; it just wasn’t my thing!”

CBS: Does Kevin show an interest in showbiz? If so, would you encourage him to follow in mom’s footsteps?

WW: “Ugh, gosh…he’s an avid basketball fan and has a wealth of knowledge (trivia etc.) on the topic. He has 3 dream careers and we try and encourage him without being over bearing. The first is a NBA player and that’s a one in a million shot, the second is a NBA commentator and the third is helping to run the family business. I’m busy everyday trying to get my business to run efficiently and he’s really into watching me do it. But, any one of these choices he doesn’t like or not like more than the other. We have an incredible relationship and we talk about it all the time. He’s very bright (although not straight A’s; he gets that from me!) and I tell him right now, school is your job.”

CBS: Did you ever want to have more children?

WW: “I think I missed the boat on that…I’m 47 and I’ve had 3 miscarriages. One was at 7 weeks and the other two were at 5 months. It was just a nightmare and it happened 3 ½ years in proximity. I met my man and we got married after the first miscarriage…we decided we were going to try this again. We got right into the baby making thing and I gained 103 pounds and I was on bed rest. My mind is on adoption and even that has a 3 year window. I really do want a girl, but I am so blessed with the family we created.”

CBS: How do you balance your busy career and motherhood?

WW: “Well, I always have wipes, Krazy glue, a Tide stick and a writing agenda. I’m also really good at purging junk. We just got finished with an underwear fashion show so Kevin could show me his favorite bottoms! Right after I get off the phone with you, I’m putting all the new underwear upstairs in his drawer and throwing all the old ones out! I also try to fix broken things right away. My manager and my Executive Producer is my husband and I never have to explain why I’m leaving at 1:00 – he knows why, I’m lucking in that aspect. We’ve figured out to work our family into our family business.”