Una Healy: “I Am Such A Proud Parent”

The Saturdays star Una Healy and her 7-month-old Aoife Belle posed for some festive Halloween photos in Los Angeles, Calif. last week. The British popstar smiled alongside her lil’ pumpkin and opened up to Celebrity Baby Scoop about the joys of raising her daughter with husband, rugby player Ben Foden. 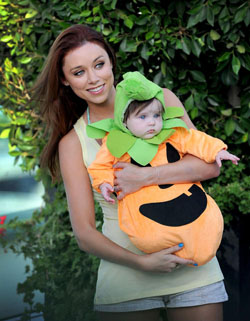 “I love being a Mum,” Una gushed. “I honestly can’t imagine life without Aoife Belle now!”

While life has taken a dramatic turn, the new mom, 31, said she wouldn’t change a thing.

“Although my life has completely changed since becoming a mum it’s so much better than before and complete,” Una shared. “I love the fact myself and Ben and Aoife Belle are a little family.”

And she’s taking the time to cherish her daughter’s developments.

“Her first smile, first coo, first tooth, standing for the first time, first solid feed,” Una listed Aoife’s many milestones. “I take pictures of her all day every day, I am such a proud parent,” added the Higher singer.

Una along with the rest of The Sats – a multi-platinum-selling girl group with 11 Top Ten singles and 3 Top Ten albums – have been recording their highly-anticipated fourth album in the States, set to be released in January.

While in Los Angeles, the girls have started preparing for their debut American performance at The Roxy on Tuesday October, 30.