Move over young Hollywood — these mini fashionistas are taking over as the new trendsetters in Tinseltown!

CelebrityBabyScoop has gathered the most fashion forward kids, from Suri Cruise to Kingston Rossdale, to Honor Warren. Read on to see who made our top 10 best dressed celebrity kids in Hollywood list.

With fashion designers as moms, it’s no wonder that celeb kids such as Kingston Rossdale, Skyler Berman, Suri Cruise and Harper Beckham are seen in today’s top fashions.

“It is too much fun. It is like dressing a live doll,” Rachel Zoe said of dressing her 1-year-old son Skyler with husband Rodger Berman. “He has no opinion. Every minute I have to buy things for my son,” she confessed. 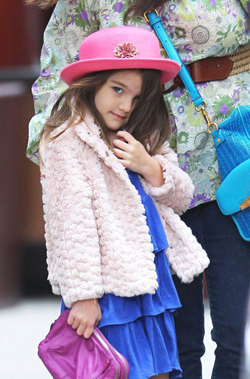 And not to mention Suri Cruise‘s fashion statements!

Her mom Katie Holmes came clean about Suri’s lack of weather-appropriate attire, admitting it can be “embarrassing.”

“Recently, Suri and I were taking a walk and a fight got started because it was cold outside and she didn’t want to wear her coat,” Katie said. “My philosophy is, well, fine, because after a block of walking you’re going to ask me for your coat. So the pictures of her [without a coat in cold weather] are sort of embarrassing.”

Suri’s Top Gun papa, Tom Cruise, has also weighed in on Suri’s much-talked-about fashion choices — such as her heels and lipstick.

“Listen, I believe that she (should wear) whatever she wants to wear,” Tom said. “She dresses herself. I want to encourage her creativity and her own self-expression. I think that’s important for the child’s own identity.”

The doting daddy went on to say that Suri is “so sweet” that it’s hard to say “no” to her.

With Harper Beckham‘s mom making a name for herself in the fashion industry, it’s no stretch to hear that her wardrobe is full of fancy duds!

“She has so many little dresses!” dad David Beckham said of his 11-month-old daughter with Victoria Beckham. “I didn’t realize how excited I would get over buying hair bows.”

Harper looked cute as a button when we spotted the mini-fashionista with her posh mama at LAX, sporting a Little Marc Jacobs Isis Even Stripe Dress ($119) and a pair of Chloe tights ($50).

The always stylish Gwen Stefani said she lets her stylish 6-year-old son Kingston pick out his own clothes.

“At that age they like to be in control of everything, so I let him choose,” the L.A.M.B. designer said. “Luckily, everything in his closet is cute so no matter what he picks, he’s gonna look good. For a while he was into costumes. Now he doesn’t even want to wear shoes.”

Mom-of-six Angelina Jolie said she is fascinated by her 6-year-old daughter Shiloh with Brad Pitt, whom she revealed “wants to be a boy.”

“I think she [Shiloh] is fascinating, the choices she is making,” Angelina said of tomboy daughter, who is often seen out and about in suspenders and suit jackets. “And I would never be the kind of parent to force somebody to be something they are not. I think that is just bad parenting…. Children should be allowed to express themselves in whatever way they wish without anybody judging them because it is an important part of their growth.”

Angie added that the fact that Shiloh’s unique sense of style – whom she said dresses “like a little dude” – has been a such a hot topic shows how flawed our society is.

“Society always has something to learn when it comes to the way we judge each other, label each other. We have far to go,” Angelina said.

Who do you think is the best – and worst – dressed celebrity kid?