My four year-old doesn’t eat. Here’s a picture of my 2 year-old eating salad, she’ll eat anything but fast food, bless her: 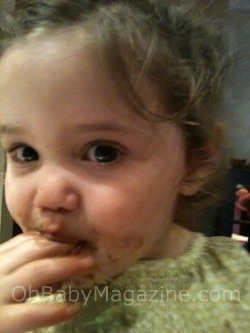 Let me rephrase my first sentence: My 4 year-old son doesn’t eat what I want him to. He’s a pretty picky eater. Actually, I’ve heard of kids who are pickier. Anyway, I think he’s a pain in the butt when it comes to meal times.

Potatoes – fried, roasted, but NOT mashed

Khol Rabbi – raw, only with salt & lemon (courtesy of my Greek husband)

Anis – raw, only with salt & lemon (courtesy of my Greek husband)

Apples – skin off, sliced (once I saw him eat an apple whole – my heart sang)

Pasta – lately it’s plain, no sauce, only olive oil (how he got to this I don’t know)

Rice – no wild rice, and it has to be as plain as possible – but the occasional onion gets through the drawbridge that is his mouth

He’s not a fan of any meat and calls it all chicken. Sometimes he eats pork, beef, chicken and fish, sometimes he doesn’t. He also loves pepperoni. I buy low sodium, turkey pepperoni, which both of my kids love, but I only let them have it once in a while.

He loves toast with butter & honey, Nutella wraps and sandwiches (sometimes he eats the crust, sometimes he doesn’t)…but not tuna or egg salad. Eggs – sunny side up or scrambled. Hot dogs & hamburgers…he enjoys. When we let him.

He loves Caesar salad and last Friday he ate salad with olive oil & balsamic vinegar. It was one of the happiest days of my life. Just proves that if you keep offering it to them, one day they may just be inspired enough to eat it.

He will eat any kind of dairy product, cracker, candy, chocolate, or chip. I think he could live on cheese, yogurt & milk but he also loves pop. Which I do let him have a little bit at parties. My husband recently upped his cool with the kids and “made” his own pop by mixing Perrier with apple juice. I know some kids don’t like fizz (my nieces) but some are drawn to it (my kids).

So really after looking at this list that I’ve compiled it seems that Andreas doesn’t actually eat that badly. BUT he won’t eat anything if it’s touching on the plate. So you can forget: Stews, Chili, and most soups.

You can actually see the horror in his face when he comes to the dinner table and there’s a heaping pot of chili. I always serve it with rice, so every time I make chili he cries that he can’t eat it and I sit there and pick out the chick peas, and the corn – ever try to pick certain ingredients out of a loaded pot of chili? Not fun. Why do I do it? I can’t imagine sending him to bed after eating only basmati rice.

Well, once I did send him to bed hungry after we all had dinner and he refused to eat it. After he was read to and tucked in he cried that he was hungry – so down we went to the kitchen for an 8:30pm bowl of cereal (I forgot to mention that he loves Cheerios, Shreddies and Oat Squares). I don’t like prolonging bed time. So I make sure that there is at least one or two things at the dinner table that he eats.

One night a couple of weeks ago, I was fresh out of dinner ideas. I had forgotten to take anything out of the freezer, my veggie drawer was looking a bit bare and I had some leftover beef & chicken. So I made a stir-fry with frozen veggies and the leftover meat. We had nothing else. It was a solo-stir-fry night. (First of it’s kind – we need to have variety.)

While I was cooking, he said his usual, “Mommy it smells so good in here. What are you cooking?” I told him stir-fry, and he didn’t quite grasp what this meant. So he sat at the dinner table and started his sniveling. “I don’t like this…everything is mixed together, what is this?” I had a really long and tiring day, and frankly I was annoyed at the fact that I had made my life this way, I didn’t want to be a short order cook for my 4 year old. So I yelled. Sorry, I don’t like to raise my voice to my kids, but this day I did.

Well, I’m really not advocating yelling here. But I think he got the feeling that I was upset and wasn’t going to budge on the food issue. So he sat down and he ate it.

I guess my point is, not to yell at your kids, but that if you’ve made dinner and that’s all there is to eat, if you don’t offer them any other choices, maybe if they’re hungry enough, they’ll just eat it.

Worked for me – that night.