My big sigh in the sky

Three weeks on a family trip in England. Three weeks, where after the first few days, Nick and I looked at each other and realized that we really missed daycare. Yes, it’s true, I’m not embarrassed to admit that we were really tired and wished we could have just dropped our kids off at daycare – even just for a few hours. At 2.5 and 5 they are busy, busy, busy and we felt old, old, old.

Our family is awesome, and we felt so welcomed, kids and all. But at the end of the day when you’re staying at someone’s house with your two kids you are always worried. Worried that they are going to break something, touch something they shouldn’t be touching, peeing where they shouldn’t pee (sorry Helen & Joanna) or start to really annoy your hosts to the point where they start to secretly count down the days to your departure date. This is tiring. Parenting is tiring. Especially when you’re not in your own home.

The trip was fun. It was great to see everyone and to meet the new babies. We were on the go for most of the time and stuck in traffic a lot. On the go with our very active and sleep deprived children. Let’s just say that some people may think that they weren’t on their very best behaviour at all times. But, they are just kids. Normal kids, who don’t like to sit quietly. They did the best they could, and so did we.

Comments like, “I feel sorry for you,” or, “They are so cute, but they don’t stop,” and, “You look really distressed,” were thrown at me. More than once. But hey, they were taken with a grain of salt. I’m happy that my kids are as active as they are. I’m tired, but I’m glad that they are moving around, exploring and learning. I may not be the most patient parent, but I wouldn’t change them for anything. Not even for more sleep… GASP!

It went by so quickly. We actually wished that we had stayed longer. Having said that, we’ve decided that we won’t be taking this trans-Atlantic flight with our two kids anymore… at least not until my youngest is five. Sorry familia.

It’s the tantrums in the clouds club… join me.

My flight back was not fun. I don’t know what else to say. It was HORRIBLE. Actually, it started on the drive to the airport.

“My belly hurts”. This was heard at 7am from the back seat. Followed by my daughter vomiting in our rental car. 20 minutes into our hour long drive. YAY to a good start! 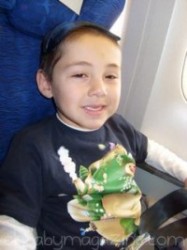 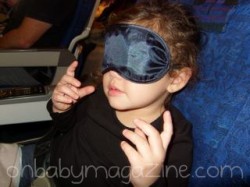 We were exhausted before we even boarded the plane. The first three hours were cool. My kids actually ate the food. They watched TV – my son’s favourite thing to do. Until my daughter started to bother him. That’s when it started to go downhill.

I busted out the new toys. That lasted for about 10 minutes. They were fighting and hitting each other, and kicking the seats in front of them. My daughter was impossible to entertain. We tried, but she was not happy.

Then we had tantrum number one. She screamed, “I want to get out.” Over. And. Over. It was hell. It lasted about an hour. Felt like 10. We finally calmed her down. Or actually, she tantrummed herself into a nap. (FYI: I make up words.)

I cried in my seat, huddled up next to the window. People gave us dirty looks. We were on display. I felt like I was naked in front of a crowd. Horrible.

We put her limp, tired and sleeping body in her seat and buckled her in. We were one hour away from our destination. Fingers crossed that she would sleep through the descent. Just as it started, she woke up. Screaming.

After my futile attempts to get her back in her seat, the flight attendant said, “Sweetie, if you don’t sit down and put your seatbelt on we can’t land the plane.” I swear I heard a collective gasp from the passengers. Damn. Not only was she super disruptive for three hours of the flight, but now she could be the reason that we NEVER get off this freaking plane!

The flight attendant was desperate, and so he gave me the lap belt that people use when they fly with their under two year olds. I forced her on my lap. He buckled her in. I held her between my thighs (which had bruises after this) and held her shoulders down with my elbows. I did the best I could. She’s strong though and it was a struggle for the 20 minutes that it took to land the plane. She was crying. I was crying. I was exhausted. Emotionally, and physically exhausted.

Some people on the flight were sympathetic. Some were rude. Most just ignored us. Surprisingly I didn’t get any comments. I was ready for them. But thankfully they didn’t come. One man even offered me his iPhone. Bless him. It didn’t work. I had tried mine.

We landed. And of course were on display once again as everyone passed us as they left the plane. It was one of the worst days of my life.

In the terminal, she was fine. Happily walking around with her teddy. She was a different child. The kids were playing and laughing as Nick and I wearily waited for our bags.

That’s it. I will not get on another plane with her for a long haul flight until she’s five. Mark my words.