Actress and comedienne Kym Whitley, known for her larger than life personality and hilarious roles in movies and film alike, is back with all-new episodes of her hit docu-series, Raising Whitley on OWN: Oprah Winfrey Network. The episodes premiered January 4, 2014 at 9:00 PM ET/PT. 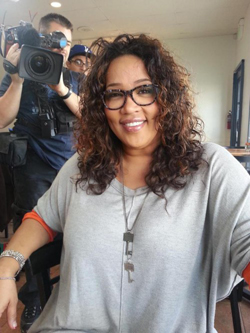 Kym opens up to Celebrity Baby Scoop about the upcoming episodes of Raising Whitley that she says “dive into my life as a mom.” She goes on to talk about her 3-year-old son Joshua and the “village” it takes to raise him. Continue reading about her upcoming projects and New Year’s resolution.

CBS: All-new episodes of Raising Whitley premiered on January 4th. What can fans expect to see in the upcoming episodes?

KW: “They are going to see more fun, of course, as well as more motherhood. We’ve expanded the episodes from 30 minutes to an hour. Before the show played like a sitcom, because the 30 minutes were mostly all fun, and now we have the chance to really dive into my life as a mom. It’s an expansion of that.”

CBS: Could you tell us about The Village in the series?

KW: “The Village consists of a group of my friends that have been around for years, some of them not necessarily on a day-to-day basis. My ‘village’ and I work together, and baby Joshua is the glue that keeps us all together. I don’t think a lot of us would hang out as much as we do if there wasn’t Joshua.

All of the ‘villagers’ came in when Joshua became a part of my life. I had made a call crying out for help in raising the child and they all agreed. They all split up the responsibilities and everyone has their own certain specialty. Some of them are good at education and handle that and some are good at nutrition so they talk about that. What I like to say about The Village is that they are all the parent. Instead of just trying to do everything myself, they are the other parent that helps.”

CBS: Why do you think viewers are so drawn to your hit docu-series?

KW: “I believe that it is a good escape. It is a docu-series that is fun and funny, and you can learn something. If I can get you to laugh and you walk away learning something, then I’ve done my job. I believe that people just want to laugh and have a good time. I am a different kind of celebrity; I don’t have the big, giant house, the fancy cars, and all the designer stuff. I am just a girl from Cleveland. I believe in letting people see the real. For example, I have a microwave in my house that has a turn dial [laughs].”

CBS: The upcoming episodes will also give viewers an inside look at your quest to raise awareness of childhood allergies. Could you tell us about your “Don’t Feed Me” allergy awareness T-Shirts and care packs?

KW: “Absolutely. I didn’t know that my son had allergies until he spit up eggs one day and one day he had a little peanut butter and his face swelled up. I took him to get tested and found out that he is allergic to everything. I had to figure out a way to make sure my son was always safe while he was in the care of others like the ‘villagers.’

I made a T-shirt that features the child’s name and checks off all of the allergies he or she may have, and you can also write them in. That gave me peace of mind when I sent my son to baby daycare or when he went out with friends to a birthday party. I also made a medicine bag where you can check off the child’s name and check off what he is allergic to, so that the caretaker always knows what he is allergic to and has the necessary medicine.”

CBS: How old is Joshua now? What is he like personality-wise?

KW: “Joshua is such a joy! He will be 3-years-old this month. Ever since he was born, he has been a very special soul. He is extremely smart and knows every little thing. He catches on to everything! He also loves music – he plays the drums and the piano and he’s only three. He loves music and is an amazing little boy.”

CBS: What are the greatest rewards of being a mother? Are there any major challenges?

KW: “One of the rewards is the discovery. My life is different now and I have a different path of discovery. I would have never had that if I hadn’t become a mother. It has made me look at life differently. The reward is that instead of a barometer, I now have a meter of what is important in life, because I put him first before I make a decision.

There are definitely challenges. For example, trying to work creates challenges and you wonder about a lot of things. Where does he go to school when you’ve never been a parent? I probably wouldn’t get him into kindergarten until he is nine if I didn’t have the help, because I have no idea [laughs].

I am actually working on a book right now, because I thought to myself, ‘If I am a mother and I don’t know what is going on, I am going to write a funny book to help moms. It makes no sense. Do you put them in daycare then preschool, then do they go to kindergarten?’ Those are some of the challenges I highlight in the book.

I am working on the book as we speak. It is a funny take on motherhood. I think I have a different perspective than a lot of mothers. I am open and honest, and sometimes things are ridiculous. I want the book to be where the readers can see themselves and not be so serious about it. I wanted to do a funny take on that and show mothers how to get that fifteen minute nap. For example, inviting your girlfriends over and telling them you have a new recipe you want to show them, then you lock the door of your bedroom and go to sleep [laughs].”

CBS: What kind of mom are you? What is your parenting style?

KW: “My parenting style is probably like that of my parents, because you do how you learn. My mother was very nurturing and loving, but very stern. She was a disciplinary. My dad was also very loving. I would say that I am funny and I give a lot of ‘time-outs,’ but they work.

My parenting style is ever-evolving, and the first thing I learned is patience. The biggest lesson I have also learned is that a child needs a nap. When you think your child has lost his or her mind, and there is nothing that Superman or anyone can do, you just stop and think, ‘Oh! He needs a nap!’ Hands down, it works every time.”

CBS: Do you think that women can really “have it all?” Why or why not?

KW: “We work very hard and the biggest job is being a mother, then you put a career and being a wife on top of that. It’s almost impossible. You only have 24 hours in a day and you have to sleep, eat, and some of us have to work. I believe that women must know that they need to pace themselves and ask for help, then they can have it all.”

CBS: With the New Year here, do you have any special resolutions?

KW: “This year when I meet women on the street, I want to be forward with compliments and encouragement. Sometimes women ultimately judge and look down on one another and will say something, but we very seldom say something nice to a stranger. ‘Beautiful dress! Love your hair!’ That is what I want to do this year.”

CBS: What else is up next for you?

KW: “I have a show that just got picked up on ABC Family called Young & Hungry. It is a very funny show about a chef named Gabi who tries to find a job with a young, hot millionaire. I play his maid. I also have a movie with Marlon Wayans called A Haunted House 2 that is also coming out. My cartoon Black Dynamite is also coming back for a second season, and I also did a family movie on the Hallmark Channel called Anything Is Possible, which is about a boy who starts playing the piano at three years old and now he is eleven. It’s an incredible film!

To catch Kym on Raising Whitley, tune into OWN on Saturdays at 9:00PM ET/PT.