Heidi Klum: “I Try To Live My Bucket List”

America’s Got Talent judge Heidi Klum is sure doing “sweet” things to give back! Last week, she partnered with Operation Shower and Babies “R” Us for a “Sweet Surprises” grand-scale baby shower for 125 military moms-to-be. At the event, held at Universal Studios’ Globe Theatre in Los Angeles, Klum showered the expectant moms with joy and much-needed gifts from her Truly Scrumptious collection, available at Babies “R” Us. 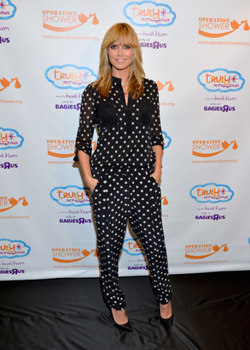 Celebrity Baby Scoop also attended the “Sweet Surprises” event and had the chance to catch up with the Project Runway star. The mom-of-four, to daughters Leni, 9  and Lou, 4, and sons Henry, 8, and Johan, 7, chatted about the Operation Shower event, her Truly Scrumptious line, how she balances everything “like other working moms,” and why she feels that she lives her bucket list.

CBS: Tell us why the “Sweet Surprises” baby shower is important to you?

HK: “I think that these women are all very important. They are all military moms or moms-to-be, and their husbands are far away. They don’t get to experience most of their pregnancies with their husbands, so I thought it was nice to put this event together for them to get together, share their stories, and hook them up, so that when the baby arrives they have a crib, a stroller, a diaper bag, lots of diapers and clothes, and everything. I thought it would be a nice gift for them, because their husbands do so much for us.”

CBS: How did you get involved with Operation Shower?

HK: “Through Babies ‘R’ Us. I’ve been with Babies ‘R’ Us now for a little over a year and at the beginning of the year, we always look at the calendar to see what kind of events they are doing. I said that for me, this Operation Shower event was an important one and I wanted to participate and gift a bunch of things to these moms. There were 125 moms invited here today and I think that it’s great!”

CBS: Could you tell us more about your Truly Scrumptious line?

HK: “I do cribs and bedding, lamps, rugs, and stickers for the wall, such as butterflies and monsters for the boys. I also do strollers and I try to make really cool diaper bags. I also do boy’s and girl’s clothes, which go from infant up to five years old.”

CBS: What is the inspiration behind the line? Did you kids help you design any of the items?

HK: “The inspiration is fun! I think that kids should have fun and be comfortable, and I wanted the clothes to be easily washed. You have to wash the clothes all the time because you want them to have fun and get dirty. I have four kids myself and my little ones love color, bright, and bedazzle, and they are not interested in black or white tee shirts or sophisticated things; they want fun stuff. The louder, the brighter, and the more ruffles, the more they are attracted to it.

In regard to whether my kids helped me design the items, my son Johan has done some things for some of the boys’ clothes that I’ve done in the past. He loves to paint, so he designed some monsters that we printed onto the shirts.  All of the proceeds from those shirts went to charity.”

CBS: What is your favorite part about being a mom?

HK: “That is so hard, because there are so many amazing things. I would say the love that you feel with a child. For me, having a family is life and I understood once I had children how amazing it is, and that nothing else is really important but them.”

CBS: How do you balance your career and family life?

HK: “I think I do it like other working moms, it’s just that for me, other people get to see it because I am on TV and do different things. When other moms go to an office from nine to five, I go into a studio and shoot something. It’s the same, but it just looks different from the outside. My hours are similar and I’m quite lucky that I have the weekends off and can ask to start earlier so that I can come home earlier. I have a lot more freedom, in a way. I don’t have a boss, let’s say, where you have to be there at a certain time and stay until a certain time. I am very lucky in that way, as I can say, ‘I want to start earlier because I want to be home for dinner.’ [laughs] It’s great, because I can have both; I can work and be there for my family.”

CBS: What are some of your favorite family activities?

HK: “We love to paint. I also do all of their activities, like they do soccer on Saturdays and gymnastics. They like to change things up too, as they get bored and want to try different things. I have gone through karate stages with them, where for two years they were really into karate and I had to get all of these karate outfits [laughs]. They did karate with the helmets and I had to get all of this stuff for everyone. Then there was the ice-skating phase, and now it is the gymnastics and the soccer phase.

My older son Henry, who is eight years old, is really into flag football now. He is the running back and is quite good! They all were fighting over him and I was like, ‘He’s eight years old! Really, you guys are fighting over that already?’ Those dads are hardcore. [laughs] They want to get the best players, but at this age, I didn’t know because I am from Germany and I am just learning about football. It took me the longest time to realize where he has to run to and what he has to do!” [laughs]

CBS: You have accomplished so much thus far in your career. What else is on your bucket list?

CBS: What is up next for you?