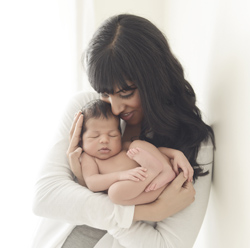 Saphia Khambalia is a news reporter and television personality. She’s covered the World Cup nationally for CBC Sports, trekked around the African savannah and cities across Ontario as a videographer and most recently you may have caught her on Citytv Toronto’s 6pm and 11pm news. She and her husband welcomed in a baby boy in December of 2013 and we wanted to share her eventful experience.  It just so happened it all went down in midst of the massive Ontario ice storm. This is one story that brings truth to the baby-rearing gospel: ‘expect the unexpected.’

She laughs when asked to recount the experience for us, “You’d think my years as a live-TV news reporter would have prepared me for anything, right?” Her little boy Jacob decided to come one week early, a few days before Christmas. It was right as a layer of glistening ice had formed on roads and trees around Ontario. Saphia says, “It made for a beautiful trip to the hospital and at that moment we really didn’t think much else of the massive ice storm that was gripping the province.” That is until after labour and delivery when she says the lights began to flicker, “Yes, our hospital was one of those that lost power! But, we were so in love with our little guy I almost didn’t even notice that there was partial darkness till the back-up generators came on!”

One would think that would be enough to derail a brand new mom. Instead, it became the backdrop for memorable cheer. She says, “Nurses kept chaos out of the NICU and came to hand out Christmas presents to the babies. All the new parents shared stories in the dimly-lit hall ways while car alarms went off outside in the parking lot (large tree branches were falling on vehicles left, right and centre, believe it or not)! We had a crush of family and friends coming to visit the baby, there wasn’t much else to do with the hundreds of thousands in the province in the dark.”

Not to mention, around the same time, Jacob was introduced to CityNews viewers on-air (see the video here). “It was certainly a wild, wonderful first few days,” remembers Saphia, “We were discharged from the hospital around 10pm on Christmas Eve and we took our little guy home to spend our first Christmas as a family. All that mattered was that brand new baby in our arms. You take everything else in stride.” Saphia’s advice to other new mom’s: “the only thing you need to say to yourselves is, ‘bring it on world.”