Have a safe trip, see you next fall

I got the call from the daycare.

You know the call. The phone rings. You see that it’s the daycare calling and you almost don’t answer the phone. But you do. Because you’re a mom and you have to. Here’s how it went:

“Hi Sandy, Andreas (my 4 yo) had an accident and we have to take him to the hospital”.

That’s how the call started. So, I start to panic, and say something along the lines of, “Hurry up and tell me what the heck happened”.

He was running outside, and his ‘friend’ tripped him. (Thanks friend.) He fell and hit his chin on a bike. His chin split right open. Apparently it bled a lot and it was VERY deep. If you can believe this, I didn’t look at it once.

Daycare Director let me speak with him over the phone and he was crying and saying, “Mommy, I need you. Please come now.” So cute. I LOVE THIS KID.

She told me that it looked really bad and that he would likely need stitches. She had already done first aid on him and suggested that if I couldn’t stomach open flesh and blood to send Nick. She also offered to take him to the hospital herself. Awwww…

Anyway, I decided that I was going to go to the hospital but that Nick was going to come too… we like to share. Two problems here: we only have one car and Nick is at a meeting. I call his cell phone and guess what? No answer. I call Steph’s cell phone too (she’s at the meeting) and guess what? No answer. So I use every profanity that I can think of, bang things around a bit, then try to look for the number to the company where he’s at… no such luck. They spell their name kind of messed up – so not even Google was able to help me.

I finally called one of our clients – they referred this company to us – asked sweetly for the other company’s number and then called them. I’m sure they currently think that I’m totally bonkers because what kind of crazy lady calls their line and asks to speak to her husband during a meeting and then pulls him out? I do. Take that. I then arranged for my mom to pick up Alexandra, I knew we’d be there for hours, and off we went, snacks in tow. All of this happened in the span of seven minutes.

Andreas was such a good boy. Honestly. He was so happy to see the both of us picking him up at his daycare, and he was super patient at the hospital. The only thing he was concerned about was whether or not he would get a needle, and he didn’t. We waited for FIVE HOURS, and luckily they were able to use glue rather than stitches to fix him up. YAY!

I’m so proud of my little guy. He was so patient and he asked the nurses so many questions, and only had one little freak out when they were cleaning out his chin before they applied the glue.

We left the hospital with instructions not to wet or touch his chin for five days, and he was so good. Every day he would remind me of how many days were left until he could touch his chin. It’s been over a week now and he still asks me if he can touch his chin.

The ‘friend’ at his daycare who tripped him, apologized to him the next day, gave him a hug and a letter that he wrote ‘himself’. Cute. But I don’t buy it – can the kid really ‘write’ a letter? Honestly? I don’t hold the ‘tripping’ against this little boy at all – I think he’s still too young to have done it maliciously… maybe I’m being naïve here – but I don’t think that my kid at his age and level of maturity could be that mean. It could have just as easily been my son who tripped somebody else (not really! Not my kid! – I’m totally kidding here.).

It was really sweet and Andreas was so happy after his ‘friend’ hugged him. He was beaming. But a letter? Really? I think a letter is a good idea if they write it themselves, or if it was the kid’s idea. If the parents dictated it, does it mean the same thing? What do you think? 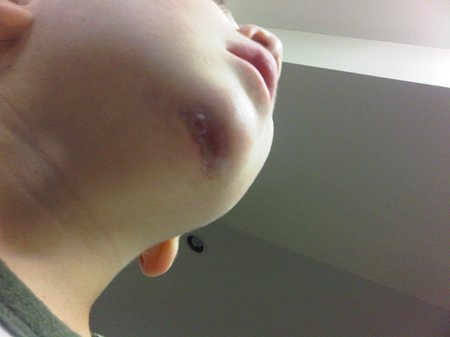