As the world waits for the first images of North West - the newborn daughter of Kim Kardashian and Kanye West – the question remains: to tweet or to make a deal? 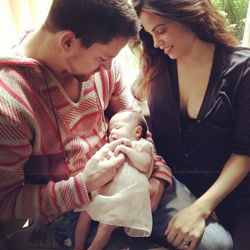 With rumors swirling that Kim’s momager Kris Jenner will introduce her granddaughter on her new daytime TV show, to reported offers of up to $2 million for a magazine cover debut, we await the first images of baby KimYe.

Let’s take a look at the big business of releasing the first photos of Tinseltown’s tots.

It’s been a few years since A-list couple Angelina Jolie and Brad Pitt received a whopping $15 million for the first pictures of their now 4-year-old twins Knox and Vivienne. The Jolie-Pitt twins – along with their four other siblings – are now just as famous as their parents.

The debut of celebrity children continues to make headlines. While the demand has not died, many star couples are passing on multi-million dollar paychecks for the first glimpse of their tots, and releasing the debut photos via social media.

R&B royalty Jay-Z and Beyoncé unveiled the first photos of their daughter Blue Ivy on Tumblr, just a few weeks after her January 2012 birth.

In June, star couple Channing Tatum and Jenna Dewan-Tatum released the first photo of their newborn daughter Everly via Facebook.

For a long time running, PEOPLE magazine had a monopoly on introductory celebaby photos. But today, many stars are turning to competitors who are doling out generous offerings.

Other high-profile parents are releasing their own photos for free via social media. While some do not debut any photos at all, and are simply caught by the paparazzi, as was the case recently for Sarah Michelle Gellar who was spotted for the first time with 9-month-old son Rocky.

Here’s a list of top 10 most expensive baby photos to date.

How do you think North West will make her debut?