Are stripes the new black? 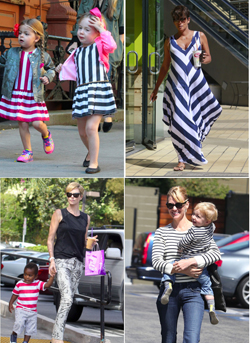 Mad Men star January Jones was all smiles with her 2-year-old son Xander on September 25. The adorable duo stepped out in matching striped shirts while out and about in Pasadena, Calif.

Sarah Jessica Parker and Matthew Broderick‘s 4-year-old twin daughters stepped out in stripes on September 25 in New York City. Not matching entirely, Loretta kept it cool in black and white stripes, while Tabitha spiced it up with red and white.

Academy Award-winner Charlize Theron was spotted with son Jackson, 17 months, in West Hollywood, Calif. on September 25. The adorable tot rocked a red and white striped top as they stepped out to Coffee Bean for an iced beverage to go.

Expectant mama Halle Berry stepped out for a smoothie at Jamba Juice in Studio City, Calif. on September 23. In the final stages of her pregnancy, the Academy Award-winner, 47, looked lovely in a blue and white striped maxi maternity dress and flip flops.

Sporting matching stripes with her son, reality star Kourtney Kardashian brought Mason, 3, and Penelope, 14 months, to a birthday party at Play Source in Los Angeles, Calif. on September 15. Earlier that same day, they attended the Thomas & Friends: King of the Railway premiere at The Grove.

The Hills alum Kristin Cavallari was spotted with son Camden, then 11 months, in West Hollywood, Calif. on July 24. Looking stylish in a striped maxi dress and denim jacket, the reality star toted her tot after getting some groceries at Whole Foods.

Do you think stripes are ‘the’ fashion statement this season?