Who needs a publicist these days?

When celebrities start sporting a baby bump, Twitter is the communication tool to spread the happy news. And when it’s time to jump on the proud-new-parent bandwagon, what better way to announce the new addition than on a social network?!

Take a look through a list of celebrities that took to Twitter to announce their pregnancy and birth news. 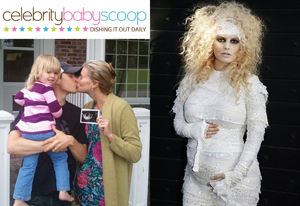 Jessica Simpson: In one of the worst-kept secrets in Hollywood history, Jessica Simpson took to Twitter on Halloween Day to confirm her pregnancy news.

While cradling her baby bump, the 31-year-old singer and fashionista – who is engaged to NBA star Eric Johnson – also dressed up in a mummy Halloween costume in a photograph accompanying the tweet.

Molly Sims: Molly Sims and her husband Scott Stuber are expecting their first child later this year. The model and actress took to Twitter to announce the exciting news.

Big news… I’m having a baby!” the blonde beauty wrote..

The 38-year-old beauty then directed her Twitter followers to read the following message on her official website: “I am absolutely, positively, downright over the moon to announce that we are pregnant!” she wrote. The mom-to-be added that their “honeymoon baby” is due in June.

Alyson Hannigan: How I Met Your Mother star Alyson took to Twitter to announce her second pregnancy with husband Alexis Denisof.

Yes, I am pregnant!” Alyson wrote. “This time it is NOT a food baby. We are beyond happy!”

The American Pie actress was referring to her hilarious response to some photos we posted at the Malibu Chili Cook Off event last September.

She wrote: “NO, I’m not pregnant! I just ate too much carnival food, that time of the month, hurt my back & couldn’t suck my gut in, and need to do cardio!”

Alyson and Alexis are already parents to 2-year-old daughter Satyana.

I know there’s been a lot of speculation, so I wanted everyone to hear from me… It’s official…Dean & I are PREGNANT!!!!”

The couple welcomed daughter Hattie Margaret on October 10, 2011. Tori has since posted several pics of her newborn daughter via Twitter.

Niki Taylor & Burney Lamar: When model mom Niki Taylor and her husband Burney Lamar were three months along with their second child together, the model mom announced the happy news via Twitter.

Guess what’s in this photo?” referring to an image of herself holding an ultrasound picture. She followed that note with another shot of herself, Burney and their 2-year-old daughter Ciel, writing, “Wooohooo!! YES!! We r expecting our 4th child!! So happy & blessed!!”

The couple welcomed son Rex Harrison on November 16, 2011. Niki is also mom to 17-year-old twin sons Jake and Hunter from a previous marriage.

Aishwarya Rai & Abhishek Bachchan: After years of baby bump speculation, stunning Bollywood star Aishwarya Rai and her husband, actor-producer Abhishek Bachchan, welcomed their first child in November 2011. How did the world find out about the pregnancy? Grandpa spilled the beans via Twitter! Abhishek’s father Amitabh Bachchan – who is also an actor and producer – Tweeted the exciting news.

“IT’S A GIRL!!!!! :-))))),” the proud new papa tweeted when baby girl arrived November 16. “Thank you all for your prayers and good wishes. Both Aishwarya and the baby are doing great and taking some much needed rest,” he added.

Joy Williams & Nat Yetton: Just prior to hitting the red carpet for the 2012 Grammys, Joy Williams announced her first pregnancy with husband-manager Nate Yetton. The Civil Wars singer shared the happy news via Twitter.

Beyond elated to share that Nate & I are expecting our first child in late June!!!” the ‘Barton Hollow’ singer wrote. “My baby bump & I will see you on the red carpet.”

Beyoncé and Jay-Z: The most anticipated birth announcement of the year was made via Twitter last month. R&B royalty Beyoncé and Jay-Z became parents to daughter Blue Ivy Carter on January 7, 2012. And it was their good pal Gwyneth Paltrow who confirmed the happy news via Twitter.

Welcome to the world beautiful Sebella Rose Winter! Mami and Daddy adore you!” Roselyn and Eric tweeted in a joint statement, adding, “The joy is overwhelming. Thanks for all of the well wishes!”

Baby Sebella is the first child for The Rush Hour actress, 38, and her Days of our Lives actor hubby.

We are so excited to say our third child arrived this a.m.,” Davenport wrote. “A big, beautiful, healthy baby girl … 10 lbs!!! Everyone is doing great.”

Chuck accompanied his announcement with a newborn photo of their gorgeous girl.