Am I a freak of nature? 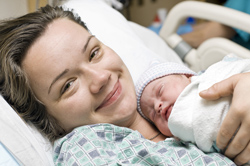 Am I a freak of nature? My family and friends would say yes. Why? Because when I look back into the labour and birth of my now nine-month old daughter, I say “it wasn’t that bad!” Yes, you read that right- it really wasn’t that bad! So am I this super woman who is build exactly right to give birth? I’d like to think so!

This realization first started nine months ago at 6:30am on Monday April 11, when I first felt a tiny little contraction. This happened all though out the day, and it got me a little aggravated. I believe I said “if this is going to happen, let’s get going!” Well, it sure did. After only an hour of sleep, 12am rolled around, and this felt different. Yes, it was painful, don’t get me wrong. And contraction after contraction happened; all I could do was breathe. Seriously, it DOES work! That is the best advice I could give any woman in labour. So while waiting an hour for my mother-in-law to come down and drive us to the hospital, I made Dave, my boyfriend, call her again. Guess what? She was sleeping! Someone was not taking this seriously, and perhaps it was because I seemed cool as a cucumber, and Dave did not have a sense of urgency in his own voice. Not only did Dave or my mother-in-law seem to realize what was happening, neither did the nurses. At that point I called the hospital three times, and all of the nurses said to keep waiting, they wanted to make sure I was dilating, and if I am in pain, vacuum (apparently mothers-to-be find this to be a pain reliever?) Finally at 5:30am I was at the hospital. I had this strange feeling no one was taking me seriously, “false labour again” I bet they were thinking. I started to wonder and doubt myself. Is this false labour? I’m not screaming, cursing my boyfriend out, telling them to get this baby out of me, so what’s the deal?

An hour later a nurse came around to check me. Well look at that, I was almost 8cm. Yes, 8cm, and no I wasn’t screaming!Again, the only thing I could do to cope was breathe (lying on my side). But look at that nurse rushing to get me admitted, and getting the birth room set up. However, the look on everyone’s face was hilarious! The atmosphere completely changed. My mother-in-law started calling me a trooper, and when all was said and done, telling everyone how amazing I am at birth, and making fun at my little breathing techniques to get me through those first 8cm. Once I was finally admitted, at 9cm I got the epidural. Luckily I did not have a single contraction during those 5 minutes, and it went absolutely fine. Before labour, was I afraid of a needle going into my spine? ABSOLUTELY! But, I can tell you, it didn’t hurt a bit. The next two hours went by fast, water broke, took forty minutes rest, one hour of pushing, and my little girl was born. No interventions, no problems, just bliss. I felt rather lucky. You hear all these horror stories, thinking yours will be exactly the same. The last three weeks of pregnancy moms envision the worst happening, and never think things will go swimmingly. Well to all of you mothers-to-be’s or mother-again’s this is my freakishly normal labour and birth story that went picture perfect, without screaming. As for my family, they have learnt that I am a freak of nature… and to always take me seriously!