CelebrityBabyScoop Looks at Our Favorite Celeb Moms Making a Difference

Three cheers for the following celebrity moms who are making a big difference! From donating to the relief efforts after natural disasters, to advocating for autism awareness, to building an all-girls school in Africa, take a look through our list of moms who are giving back and making our world a better place. 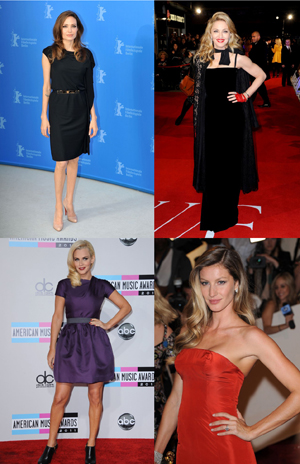 Something’s Gotta Give star Amanda Peet joined forces with American Red Cross to talk about the Measles Initiative. Amanda has long been outspoken on advocating for childhood vaccinations.

“Every day, 450 children in this world die from measles – a disease that is entirely preventable with a vaccine,” Amanda told Celebrity Baby Scoop. “We have an actual cure, yet innocent children are still dying at alarming numbers.

“The measles vaccine may exist, but many parents and children in this world do not have access to that cure. They live in remote villages, in countries with weak and inadequate health care systems. Routine immunization is a foreign concept altogether.”

The original Harajuku Lover, , Gwen Stefani, dug deep into her pockets after the devastation in Japan donating $1 million to Save the Children’s Japan Earthquake-Tsunami Children in Emergency Fund to help with recovery efforts in the devastated nation.

“I’ve been inspired by Japan for many years and have a true love, appreciation and respect for the Japanese people and their culture,” Gwen said “The disaster in Japan is beyond heartbreaking, and I want to do anything I can to help. I would never be able to make a gesture like this without the love and support of all the fans over all these years.”

Academy Award-winning actress Sandra Bullock was one of the first celebrities to donate toward the Japan tsunami relief, also giving $1 million to the important cause.

She was also involved in the disaster relief efforts following Hurricane Katrina.

“Half of my family has a deep-rooted connection to the South and Louisiana, and, for me, New Orleans is one of our most precious, historic communities — visually, emotionally, artistically,” Bullock has said.

The global impact Madonna is making with her multi-million dollar all-girls school in Malawi is immeasurable. The Queen of Pop talked about her latest – and most important – project in the country where her youngest children originate:

“Growing up in a privileged life, I took education for granted…but coming to Malawi has taught me a lot of things and (I have) learnt to appreciate what life gives,” Madonna said. “I realized how much they deserve to be educated and so for me the best thing I could do was to build a school, a unique school that will create future female leaders, scientists, lawyers, doctors and if this school is successful it will be used as a model to replicate it in other countries.”

The Alias star and her adorable daughters are often spotted out and about carrying books. So it’s no surprise the Emmy-nominated actress has been a longtime advocate for education and literacy in children.

“There is so much unmet potential. The cycle of poverty in this state has gone on for generations, and we hope we can provide a new energy to help the kids reach their true potential and avoid that,” Jennifer said. “Literacy is the most important thing you can give a child. If you can teach them to read, they can do anything.”

After a magnitude 7.0 earthquake hit Haiti, Angie jumped into action. The Oscar-winning actress and UN Goodwill Ambassador made an official statement after the disaster, encouraging people to give to SOS:

“SOS has been in Haiti for over three decades, now raising over 300 orphaned and abandoned children and caring for 4,000 more impoverished children and families to help prevent child abandonment,” Angie says.

She added: “That was before the earthquake. Now the needs for orphaned children are almost incalculable. SOS has been pulling resources together to provide temporary shelter for unaccompanied children, safe areas for mothers, and food, medicine, trauma counseling, and reunification programs for families and children.”

Most of us know Christy Turlington from the catwalk, magazine spreads and television commercials. But the model mom is taking on a much different role these days: public health advocate and director of “No Woman No Cry,” a documentary about maternal mortality worldwide.

This new mission began when the supermodel experienced complications after the birth of her first child Grace. While she received the necessary treatments, she realized that other women around the world do not have access to adequate healthcare services as it relates to pregnancy and childbirth. Christy recalled her own story with Every Mother Counts. WHAT’S THAT?

“After delivering my daughter Grace, in 2003, I began to hemorrhage. I had an ideal pregnancy and subsequent first-birth experience, but I was completely unprepared for a complication after delivery. In the weeks that followed, I learned that I was not alone and that many of my friends had in fact experienced some kind of complication. Then, a few weeks later, I learned that the same complication I had endured was the leading cause of maternal mortality worldwide. I learned that hundreds of thousands of women die each year in pregnancy and childbirth, but that 90 percent of these deaths are preventable. I don’t know that I made the decision then to focus all of my energy on this subject, but it was certainly the beginning.”

More than 343,000 women die every year of complications from pregnancy or childbirth – which is one death every 90 seconds. Christy feels these statistics are unacceptable, and we must support our worldwide sisters.

Model mom Gisele Bündchen is taking a look at different birthing methodologies used all over the world in an effort to help promote the humanization of birth. The initiative was created by midwife and neonatal nurse Mayra Calvetti, who was present at the birth of Benjamin.

“When Mayra told me her idea about the Birth Around the World Project I thought it was a beautiful idea and knew that it would be really cool if she could share a little bit of this journey on my Blog,” Gisele wrote on her official website. “I had the opportunity to experience the natural process of birth and it was one of the most life changing experiences for me and very very special!

“I believe it’s a woman’s right to make the decision about how she’s going to give birth to her child,” Gisele continued. “And it’s also her right to have access to the information she needs so she can make that decision from a place of awareness, and not a place of fear.”

Holly Robinson Peete, mom to twin RJ and Ryan, both 15, Robinson 9, and Roman 7

When Holly Robinson Peete  and her husband, former NFL quarterback Rodney Peete, welcomed their first children – twins RJ and Ryan – they never imagined that one of them would be diagnosed with autism at the age of three.

Autism affects 1 in 110 children and 1 in 70 boys. Holly sat down with Celebrity Baby Scoop to raise awareness for children and families living with autism.

“Children in minority communities go undiagnosed too long,” she said. Holly also encouraged parents to “get out of denial quickly” and “find time for yourself.”

Holly also commented on how autism affects the entire family.

“We grew apart then back together again since our son’s autism diagnosis. It was rough going in the beginning. My husband chronicled our journey in his new book “Not My Boy!: A Father, a Son, and One Family’s Journey with Autism.” I am so proud of Rodney and hopeful his book will inspire families affected by autism or any issue during difficult times. We had little hope ten years ago. A book like this would’ve helped us!”

Love her or hate her, Jenny McCarthy has become one of the strongest voices for children with autism with her charitable organization Generation Rescue. The activist mama told Celebrity Baby Scoop that her unofficial role as the celebrity spokesperson on the topic is nothing short of a blessing.

“Anytime you can do something that serves the greater good and make a difference, you should act,” the mom-of-one said. “So, what I thought was a hardship in my life, I now see as a blessing because I can reach so many people.”

Jenny’s son Evan, 9, was diagnosed with autism when he was 2 ½-years-old. The single mom has publicly spoken about the possible link between childhood vaccinations and autism. She is also well-known for saying that children can “recover” from autism.

Has the community embraced her since Evan’s recovery — and her controversial statement?

“My story of Evan’s recovery is not unique, there are thousands of parents before me whose shoulders I stand on today,” Jenny said. “I’m just as active today as when Evan recovered from autism. I still travel the country lecturing on autism, am the president and board member of Generation Rescue and actively fundraise throughout the country for the foundation. My journey now is for the other parents whose voice hasn’t been heard.”