CelebrityBabyScoop Chats with Celebrity Moms About Their Summer Plans

Grab your flip flops and sunscreen, it’s time for some fun in the sun!

With summer upon us, we asked a few of our favorite celebrity moms about their fun family plans. Laila Ali and her kids will hit the beach, Shannon Miller is gearing up for the Summer Olympic Games in London and Kimora Lee Simmons and her three kids have poolside plans. Read on… 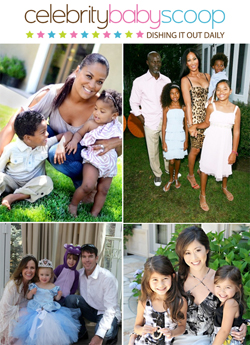 Former boxer Laila Ali and husband, NFL star Curtis Conway, are parents to two kids: son C.J., who turns 4 in August, and 1-year-old daughter Sydney. The Dancing with the Stars alum opened up to Celebrity Baby Scoop about their upcoming summer plans.

“I plan to do a lot of swimming and I want to enroll my son in official swimming lessons and get Sydney in the water,” Laila said. “I want to do a lot of outdoor activities, like take them to the beach. We haven’t really done that, because I wanted to wait until my son was old enough. You have to be careful with the kids and sand; I don’t want that situation where my daughter gets sand in her eyes. I want to take my son to the beach and do a lot of swimming, and maybe get him on the back of a bike. A lot of outdoor activities.”

Kimora Lee Simmons is accustomed to life in the fab lane! The model-entrepreneur is mom to daughters Ming Lee, 12, and Aoki Lee, nearly 10, with ex-husband Russell Simmons. The reality TV star is also mom to son Kenzo, 3, with husband, actor and model Djimon Hounsou. The mom-of-three opened up to Celebrity Baby Scoop about their upcoming summer plans.

“This summer, everyone is working,” Kimora said. “I’m launching Shinto Clinical all over the world, Djimon is on-set filming, the girls have summer activities, Kenzo has a little camp he’s going to – but I know we’ll have fun. I honestly wouldn’t mind spending more time around the pool. Maybe grill out…that sounds fab to me!”

$#*! My Dad Says star and Jenny Brand Ambassador Nicole Sullivan and her husband, actor Jason Packham, are proud parents to sons Dash, 5, and Beckett, 2 1/2. The actress opened up to Celebrity Baby Scoop about their summer plans.

“We went camping with my older son’s preschool class this past weekend,” Nicole said. “Imagine 50 kids under 6. Oooof! We are also going to Connecticut to visit my cousins and their kids. We do it every year and it’s always so fun. We get to say things like, ‘Kids go outside and play.’ “

Considered one of the greatest gymnasts in U.S. history, Shannon Miller holds 7 Olympic and 9 World Championship medals. Now mom to 2-year-old son Rocco with husband John Falconetti, the 35-year-old athlete opened up to Celebrity Baby Scoop about heading to the 2012 Summer Olympic Games in London, England.

“Yes, I’ll be in London as an analyst for major outlet,” Shannon said. “I’m so excited for Team USA! Jordyn Wieber is the current world champion moving into the Olympics so she will certainly be one to watch. Gabby Douglas has surprised many this year. Aly Raisman and McKayla Maroney are names that continue to be in the mix for one of the top spots on the team. Of course we have quite a few from the 2008 Olympic Team making comebacks including Nastia Liukin and Bridget Sloan. With only a five person team this year it will be all about staying healthy and being consistent.”

Once the queen of reality TV, Bachelorette star Trista Sutter is now enjoying a quieter life in Colorado with husband Ryan Sutter and their beautiful children Max, nearly 5, and Blakesley, 3. The mom-of-two opened up to Celebrity Baby Scoop about their upcoming summer plans.

“I just finished organizing the kids summer camp schedules (it’s a lot of work), so they are set, and Ryan and I are going to just roll with the punches,” Trista said. “He has talked about doing a 500 mile hike (The Colorado Trail) and if so, then I plan on taking the kids back home to St. Louis for visits with family and friends. Otherwise, we are going to enjoy our favorite season in Vail.”

Kristi Yamaguchi is an Olympic ice skating champion and the first woman to win Dancing with the Stars. She and her husband, former hockey player Bret Hedican, are parents to daughters Keara, 8, and Emma, 6. Kristi opened up to Celebrity Baby Scoop about their upcoming summer plans.

“I’m looking forward to a vacation in Hawaii with the family and working on projects with my Always Dream Foundation, which supports children’s literacy,” Kristi said. “In fact, Tom’s of Maine is making a donation to it as part of this story hour event.”