Annabeth Gish has been entertaining audiences since the tender age of 13 in classic shows such as The X-Files, Mystic Pizza and Brotherhood. And not to mention her latest hit TV series, Pretty Little Liars. The 40-year-old actress is lighting up the small screen alongside Pierce Brosnan in A&E’s four-hour miniseries, Bag of Bones, based on Stephen King’s bestselling novel. 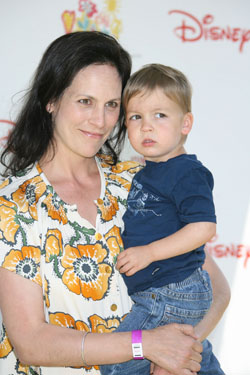 In an interview, the mother-of-two – who plays Brosnan’s wife, ‘Jo’, in the series – opened up to Celebrity Baby Scoop about her sons Cash, 4, and 3-year-old Enzo, balancing career and motherhood, her love of the horror genre and her belief in the paranormal.

How did you come up with the names for your boys Cash & Enzo?

“Cash is definitely after Johnny Cash – my husband is a big fan of his. And Enzo is a family name from my husband’s side. He’s Italian. It translates to ‘ruler of the house.’ It’s certainly proving true for us. My second son is the ruler of the house, that’s for sure.”

Do your boys get along well?

“Yes, it’s lovely to have them so close together and they are lovely playmates. Although the occasional brotherly argument breaks out.”

How do you balance career and motherhood?

“It’s a constant juggling act. I think it’s not easy at all. I don’t think anyone who represents it to be easy is being honest. Because really, when you have children it’s your heart-piece. It’s out there floating in the world and it’s very hard to leave them. But yet, I also believe that it’s very important as a mother, as a woman, to have creative purpose or creative outlet outside of your children.

The thing about Bag of Bones that was really great for me was they worked with my schedule. I had to take 5 separate trips to Halifax, but I was able to do only 3 and 4 days away from my sons. So rather than trecking them all the way up there and living in a hotel, they were so considerate to me being a mom and knowing that I didn’t want to leave my sons for too long. What’s nice is that my husband and I try to coordinate that. If I have to leave for work, then he isn’t [at work]. One of us is always home with the boys.”

Any plans to try for a girl?

“I would love to! I can’t lie. I would love to have a third, I just love being a mom so much. But I don’t know if my husband is in that same boat. Two is a good number!”

Tell us about Bag of Bones.

“Bag of Bones is the story of grief and lost love’s enduring bonds, an innocent child caught in a terrible crossfire and a new love haunted by past secrets. Bestselling novelist Mike Noonan, played by Pierce Brosnan, is unable to stop grieving after the sudden death of his wife Jo. A dream inspires him to return to the couple’s lakeside retreat in western Maine where he becomes involved in a custody battle between the daughter of an attractive young widow and the child’s enormously wealthy grandfather, the mysterious ghostly visitations, the ever-escalating nightmares and the realization that his late wife still has something to tell him.”

What was it like working with Pierce Brosnan? Read on here.