Bobbi Brown Chats About The Beauty Of The Pretty Powerful Campaign

For the second year in a row Bobbi Brown Cosmetics has launched The Pretty Powerful Campaign for Women & Girls through a partnership with Girl Rising, the global social action campaign for girls’ education. The goal is to raise awareness for the importance of girls’ education in an effort to remove barriers such as early and forced marriage, domestic slavery, sex trafficking, gender violence and discrimination, lack of access to healthcare, and school fees. 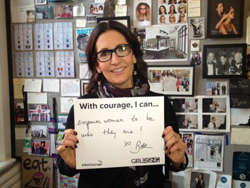 Bobbi Brown Cosmetics’ new product – Pretty Powerful Mascara – is available in a limited edition tube in the brand’s signature pink featuring the campaign’s logo. Every cent of the retail price of the Pretty Powerful Mascara will be donated to The Girl Rising Fund, which drives resources to effective girl-empowerment programs in the developing world. Celebrity Baby Scoop recently caught up with Bobbi Brown to talk about the campaign and family life with her three sons.

CBS: In today’s world where girls can be perceived as being bossy in leadership roles, how does the Pretty Powerful campaign work to dispel that stereotype? What role does confidence play in a girls ability to realize she can make a difference in her family and community?

BB: Pretty Powerful is a campaign that focuses on confidence and sharing women’s stories. It started with empowering women and girls through makeup—the idea that all women are beautiful without makeup, but by using the right makeup to accentuate the qualities that make them unique, they exude confidence, which is Pretty Powerful. That philosophy has evolved into one of empowering women and girls through education. I can’t think of anything that makes a woman or girl more confident than being educated, and therefore, able to care for herself and for her family. To me, that is Pretty Powerful.

CBS: In what ways are you most proud of the partnership between Pretty Powerful and the Girl Rising movement?  What success stories tug at your heartstrings?

BB: I’m so proud of the way that this partnership highlights how much can be achieved when women stand up to support other women. When we launched the partnership, Bobbi Brown artists at our local makeup counters worked together with Girl Rising ambassadors to spread the word about the campaign and encourage people to get involved. The stories I’ve heard about that teamwork, how committed all these women are to coming together to raise awareness about the mission to educate girls and break the cycle of poverty in one generation, is truly inspiring.

CBS: How can we support The Girl Rising Fund in our local communities? What is your fundraising goal over the next two years to fund this global initiative?

BB: There are a number of ways to support The Pretty Powerful Campaign for Women & Girls and The Girl Rising Fund. First, you can spread the word. Host a screening of the documentary and invite your family, friends and community. We need to raise as much awareness as possible about the 65 million girls missing from classrooms around the world. Second, you can purchase the Pretty Powerful Mascara at counters or on bobbibrowncosmetics.com. It’s our best-selling Everything Mascara formula, in a limited edition pop-of-pink tube. Every cent of its $25 selling price in the U.S. will be donated to The Girl Rising Fund. Third, you can make a donation directly to The Girl Rising Fund at girlrising.com. Every donation helps—for example, just $13 will provide an Ethiopian girl with a uniform, books and school supplies.

CBS: You keep a full schedule, yet you make your family your number one priority. What advice would you share with other career minded moms about striking balance between work and family?

BB: It’s all about finding a balance that works for you. For me, family always comes first. I spend two days a week at my office in New York City and three days a week at my office in Montclair, New Jersey, which is where I live. When I’m not working, I love to spend time with my family and I always make time for important life events. The key is to find a healthy and happy balance and to prioritize. If you know what’s important to you, you will always make the right decisions.

BB: I hope they always remember to be kind and respect others, no matter who they are. Also, that nothing is more gratifying than giving back.

CBS: Tell us about being a mom. Did motherhood change how you look at the world?

BB: Becoming a mother is like putting on glasses for the first time— your priorities become very clear. Your perspective shifts and you want to make the world a better place for your children. It’s the hardest but most rewarding job you’ll ever have.

CBS: What activities do you enjoy doing as a family? Do you have any favorite summer get-a-way spots?

BB: We love to travel together as a family—being active, exploring new places and trying different cuisines. Last year we went on a safari in South Africa, it was an unforgettable trip. In the summer, my favorite getaway is our beach house in Bay Head, New Jersey. My sons bring their friends, and usually a few nephews and an exchange student or two are there, as well. It’s busy, it’s noisy and it’s fun.

CBS: Do you have any new projects coming up that you’d like to tell us about?

BB: This spring has been full of new projects that I’m excited about. First, we launched Skin Foundation Stick in March, which is an updated version of my iconic Foundation Stick that I launched 21 years ago. The new formula has a translucent base, which makes it even easier to blend and layer seamlessly into skin. We also added four new shades for a total of 24 skin-tone correct options—there’s something for everyone, and the stick formula is portable and convenient for women-on-the-go.

I’m also excited about my partnership with Safilo Group to develop my own line of optical wear. In January I launched a collection of eyeglasses, sunglasses and readers. As a long-time glasses wearer, and after spending my entire career looking at women’s faces, I know how many women wear glasses and how hard it can be to pick frames that work for your face. I’m confident that the line we developed will cut down on that confusion and make women feel excited about and confident in their glasses.

At the same time, I’ve written my eighth book, “Everything Eyes,” that comes out in April and contains eye makeup tips and tricks for glasses and non-glasses wearers alike. Lastly, we have a makeup collection called Perfectly Defined to complement the eyewear and book launch. The highlight of the collection for me is the new Perfectly Defined Gel Eyeliner, which is my Long-Wear Gel Eyeliner formula in a convenient retractable pencil (in six shades) as opposed to the traditional pot.