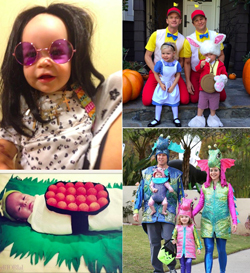 What better way to celebrate the spook-tacular holiday than by looking at our favorite celebrity kids in their boo-tiful costumes!

From Neil Patrick Harris‘ festive family-of-four, to Alyson Hannigan‘s colorful crew, to Tori Spelling‘s foodie-themed fun, let’s take a look at some of the best Halloween costumes in Hollywood.

The year before, the festive family-of-four dressed up in a Peter Pan theme, with NPH going as Captain Hook, David as Peter and their twins as Smee and Tinkerbell.

And not to mention this year’s Alice in Wonderland theme!

“Our costumes for the Halloween carnival at the kids’ preschool yesterday,” NPH posted via Instagram. “But 10/31 will be frighteningly different..! @DavidBurtka came up with both themes/costumes. He’s amazing.”

Last Halloween, the adorable mother-son duo dressed up as Jessie and Buzz Lightyear from Toy Story.

Instant Mom star Tia Mowry-Hardrict was all smiles with her son Cree, 2, in West Hollywood, Calif. this year (October 13).

Sporting a Superman costume, Cree and his famous mama had a blast picking out the perfect pumpkins at Mr. Bones Pumpkin Patch.

Alyson Hannigan and husband Alexis Denisof love getting dressed up at Halloween.

The cute couple were seen trick-or-treating with their daughters Satyana and Keeva in Brentwood, Calif. last Halloween Day. The festive family-of-four were a colorful bunch in their seahorse costumes.

The high-profile family love celebrating Halloween. The year prior, they dressed up as a scarecrow couple alongside their sweet daughter Satyana who went as a pumpkin.

And who could forget those fabulous kangaroo costumes when Sati was just a lil’ baby!

“The Princess of Darkness,” proud papa Jack Osbourne captioned a shot of his adorable baby girl.

Dressed up as her 62-year-old rockstar grandfather Ozzy Osbourne, 1-year-old Pearl Osbourne nailed it with a long black wig and purple shades in the hilarious photo.

Grease is the word for LeAnn Rimes.

The country singer dressed up as Sandy from the classic movie last Halloween. She posted photos on her Twitter account of herself, husband Eddie Cibrian and stepsons Mason, and Jake.

She wrote: “Family of the Grease days, Indiana Jones and a tribute to our navy seals.”

Who’s the Boss? star Alyssa Milano got into the Halloween spirit with her sweet son Milo last Halloween.

The actress and her baby boy looked like the perfect duo in their Halloween costumes.

Just days before Halloween Day, the sweet sisters were spotted in matching Incredibles costumes as they headed out with their movie star mom in West Hollywood, Calif.

The Sin City actress didn’t join in on the fun on that occasion, but she did later post a pic to Twitter in the festive spirit!

When he was just one-month-old, her youngest child, son Finn, celebrated his first ever Halloween in adorable fashion, dressing up as a little sushi roll.

The reality star mama seemed to pick a foodie theme for her kids’ costumes last year: she also posted a photo of her then 1-year-old daughter Hattie dressed up as spaghetti and meatballs.

“We got superhero swag. #Lorenzos1stHalloween,” the proud new mom captioned the photo with fiancé Jionni LaValle and their then 2-year-old son Lorenzo.

What’s your favorite Halloween costume out of Hollywood?