A Look At 5 Stepfamilies In Hollywood

There are millions of stepfamilies across the nation. 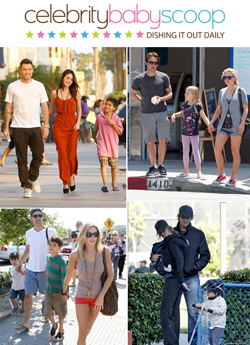 So it’s no wonder that Hollywood has its fair share of blended families. From LeAnn Rimes and Eddie Cibrian’s crew, to Gisele Bündchen and Tom Brady’s bunch, let’s take a look at 5 stepfamilies in Tinseltown.

The Beverly Hills, 90210 star said that his wife is an amazing stepmother to his son, whom he welcomed with ex Vanessa Marcil in March 2002.

“She is absolutely my better half in parenting,” Green said. “She just gets it. It’s instinctual for her. She loves my son, Kassius. And from the time we started dating – you know, she was 18 – she stepped in and took control. It’s unbelievable. At 18, I was like, ‘Hey, which club is open tonight? And how cool do my pants look? Can I sneak a drink across the bar without getting caught?’”

Country crooner Sara Evans has her hands full with a blended family of 7 children with husband Jay Barker.

The Anywhere singer opened up to Celebrity Baby Scoop about staying organized in their large family.

“It’s definitely a lot to keep track of [laughs]!,” she said. “I try to stay super organized with my schedule. My work schedule is crazy by itself, but when you add in 7 kids and their school activities, sports, Jay’s work, etc., it can be nuts. I have a calendar that I keep with me almost all the time to just stay on top of it all.”

“We’ve definitely talked about it and would love to have a child together at some point,” she said. “Right now we’re so busy with 7 kids though!”

Anna Paquin and her True Blood costar husband Stephen Moyer are getting ready to welcome twins this fall.

And they’ll be adding to the brood! Anna is stepmom to Stephen’s two children – daughter Lilac, 10, and son Billy, 12 – from previous relationships.

“I love my kids beyond anything,” Stephen recently said. “They’re the best things ever, and having two more is just going to be even more crazy, but that’s cool!”

Country crooner LeAnn Rimes is one of the most infamous stepmother’s in Hollywood. After being the alleged mistress in Eddie Cibrian and Brandi Glanville’s marriage, LeAnn and Eddie went on to wed in April 2011.

The Blue singer has often spoken about her role as “bonus mom” to Eddie and Brandi’s sons Mason, 9, and Jake, 5. And she admits she treats the boys “as if they are my own.”

“It’s not easy being a stepparent, taking on a mother or father role in your new blended family and household,” LeAnn said. “It can be incredibly intimidating…. As a parent you try everything in your power to make it easy on the kids, to make them feel like there’s more love than they could ever imagine, not less.”

And how does Brandi feel about these comments?

Though she’s comforted by the fact that her boys are loved, the reality TV star says she’s not exactly happy with everything LeAnn says and does when it comes to her kids.

“When she has a child of her own, she’ll understand how a lot of the things she says and does regarding my children can be construed as really inappropriate,” said Brandi.

Gisele Bündchen says she found out her then-boyfriend, football hunk Tom Brady, was expecting a baby with another woman when they were 2 1/2 months into their relationship. The handsome couple are now married and parents to 2-year-old son Benjamin, with their second child along the way.

Now 5-years-old, Tom’s first child, son Jack, is being raised by mom Bridget Moynahan, as well as by his football star father and supermodel stepmother.

“I understand that he has a mom, and I respect that, but to me it’s not like because somebody else delivered him, that’s not my child,” Gisele said of Jack. “I feel it is, 100 percent. I want him to have a great relationship with his mom, because that’s important, but I love him the same way as if he were mine. I already feel like he’s my son, from the first day.”

And being the classy lady that she is, Jack’s mom has only spoken respectful words about their stepfamily.

“I never made a comment about Gisele or Tom publicly. I have a relationship with these people on a daily basis,” Bridget said, adding, “My son has two loving parents and an extended family, whether it’s cousins or stepmothers or boyfriends. My son is surrounded by love.”