The celebs sure know how to keep things dramatic! 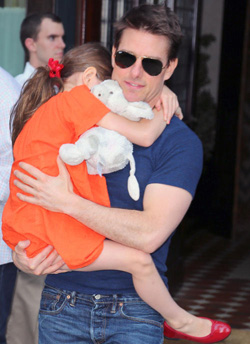 While we love watching their well-scripted scenes, we much prefer hearing them speak their own minds. From Tom Cruise‘s thoughts on postpartum depression, to Russell Crowe‘s view on circumcision, CelebrityBabyScoop takes a look at some of the most controversial quotes from seven of our favorite (?) celebrities.

We all loved Tom Cruise rockin’ his tighty whiteys in Risky Business and as the emotionally-stunted sports agent in Jerry Maguire. And ooooooh, that love scene in Top Gun!

But after Tom criticized Brooke Shields‘ use of antidepressants for her postpartum depression following the birth of her daughter Rowan, his female fan base disappeared almost overnight. Here’s what the famous scientologist said to Access Hollywood’s Billy Bush in that infamous interview.

“These drugs are dangerous,” Tom claimed. “I have actually helped people come off. When you talk about postpartum, you can take people today, women, and what you do is you use vitamins. There is a hormonal thing that is going on, scientifically, you can prove that. But when you talk about emotional, chemical imbalances in people, there is no science behind that. You can use vitamins to help a woman through those things.”

Tom has since apologized to Brooke, although he stands firm on his beliefs of antidepressant drugs. “He came over to my house and gave me a heartfelt apology,” Shields told talk-show host Jay Leno. “I was so impressed with how heartfelt he was. I did not feel that he was trying to convince me of anything other than the fact that he was deeply sorry. And I accepted it.”

◦   Amanda Peet says parents who do not vaccinate their children are “parasites”:

Amanda Peet thrust herself into the world of public controversy when she addressed the hot topic of childhood vaccinations. The gorgeous Saving Silverman star said, “I buy 99 percent organic food for Frankie, and I don’t like to give her medicine or put sunscreen on her.” She then commented on immunizations with Cookie magazine: “Now that I’ve done my research, vaccines do not concern me.”

And then the fightin’ words emerged.

“Frankly, I feel that parents who don’t vaccinate their children are parasites,” Amanda said. When questioned about the severity of this last statement, she said, “I have a side that’s practical and into statistical evidence. I’m not a casual person.”

A week later, Peet addressed her controversial comment. “I still believe that the decision not to vaccinate our children bodes for a dangerous future. Vast reductions in immunization will lead to a resurgence of deadly viruses. This is as indisputable as global warming.”

On the flip side of Peet’s thoughts on the hot topic, Jenny McCarthy believes childhood vaccinations can be very harmful. The Playboy model has said that vaccinations “stole” her child and caused his autism.

“Before the vaccination, he was huggy, lovey, snuggly,” Jenny said. “Then it was like someone came down and stole him.”

Jenny told Celebrity Baby Scoop that her unofficial role as the celebrity spokesperson on the topic is nothing short of a blessing.

“Anytime you can do something that serves the greater good and make a difference, you should act,” the mom-of-one said. “So, what I thought was a hardship in my life, I now see as a blessing because I can reach so many people.”

Jenny’s son Evan, now 10, was diagnosed with autism when he was 2 ½-years-old. The single mom has publicly spoken about the possible link between childhood vaccinations and autism. She is also well-known for saying that children can “recover” from autism.

Has the community embraced her since Evan’s recovery — and her controversial statement?

“My story of Evan’s recovery is not unique, there are thousands of parents before me whose shoulders I stand on today,” Jenny said. “I’m just as active today as when Evan recovered from autism. I still travel the country lecturing on autism, am the president and board member of Generation Rescue and actively fundraise throughout the country for the foundation. My journey now is for the other parents whose voice hasn’t been heard.”

Father of two young sons Russell Crowe took to Twitter conquering the controversial topic of male circumcision. The Gladiator star held nothing back, making clear his feelings on removing foreskin from a newborn baby.

“Circumcision is barbaric and stupid. Who are you to correct nature? Is it real that GOD requires a donation of foreskin? Babies are perfect,” the actor wrote.

After a number of retweets of supportive fans and responses to those critical of his position, the Academy Award-winning actor reached out to his Jewish friends, asking them to reject their long tradition.

Dad to sons Charlie, 8, and Tennyson, 6, Russell went on to Tweet:

“I will always stand for the perfection of babies, i will always believe in God, not man’s interpretation of what God requires,” he wrote, and added, “last of it, if u feel it is yr right 2 cut things off yr babies please unfollow and f**k off,I’ll take attentive parenting over barbarism.”

After causing quite a stir online, the Australian actor Tweeted an apology the following day.

“I have a deep and abiding love for all people of all nationalities, I’m very sorry that I have said things on here that have caused distress,” Russell wrote. “My personal beliefs aside I realize that some will interpret this debate as me mocking the rituals and traditions of others. I am very sorry.”

Eli also told TMZ that the Tweets were just “a joking exchange between friends” and that Russell is not anti-Semitic.

Although Ricky Gervais does not have children, he certainly has some interesting things to say about bad parents! The British comedian proposed a new method for population control: sterilizing the “stupid” people, he told UK’s Times Online.

While the funnyman said there are “too many people with nothing, too many unwanted children, too many people who are poor and struggling,” Gervais’ solution involves imposing a limitation on who should be allowed to breed.

“Yes, based on … stupid, fat faces,” he said. “If there’s a woman in leggings, eating chips with a fag in her mouth, sterilize her.”

In a frank confession, talk show host Chelsea Handler opened up about her personal ordeal with teen pregnancy and the current reality TV shows that glorify this controversial topic.

“We’re seeking out such grossness in human behavior and want such mindless entertainment,” Chelsea said. “…Or 16 and Pregnant. Getting rewarded for being pregnant when you’re a teenager? Are you serious? I mean, that makes me want to kill somebody.”

Chelsea knows this situation personally, admitting that she terminated an unwanted pregnancy in her youth.

“I had an abortion when I was 16,” she said. “Because that’s what I should have done. Otherwise I would now have a 20-year-old kid. Anyway, those are things that people shouldn’t be dishonest about it.”

The best-selling author and host of Chelsea Lately later said, “I wouldn’t be a good mother. I have no regret at all.”

“Thank you all for the love and support but I want you to know I did not miscarry. I chose abortion. I chose it out of fear. I feel like I made a mistake and I can’t take it back,” the reality TV star revealed to her followers.

“I have had this in my heart and it has been very hard on me,” she continued. “I was afraid to be judged by my family, my mother, even my dad. So I did it before they could find out. I should have looked into my options more but I didn’t. Ryan has been supportive through it all in case you all were wondering he is the father of that child too. And he let me make my decisions. I got on birth control right afterwards.”

While the 19-year-old teen mom’s heartfelt honesty sparked many supportive comments, Jamie also got some vicious attacks after she posted a photo (which has since been taken down) of her ultrasound, with the caption, “Rest in peace little angel. September 17, 2012.”

“Wow so u took a pic of the baby u killed?? Seriously… WOW,” wrote one follower.

Others offered support, such as, “No one should EVER judge you for your right to choose, regardless of what or why you chose. Nor do you have to explain.”