With the London Summer Games commencing on July 27th, CelebrityBabyScoop’s getting into the Olympic spirit. And we’re not the only ones! Mom-to-be Giuliana Rancic will broadcast live in London, while mom-of-four Nicole Kidman also plans to attend the upcoming games. 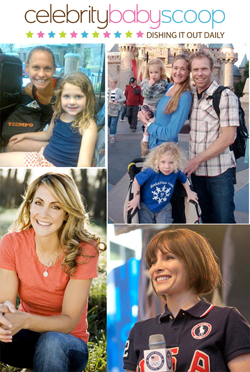 Celebrity Baby Scoop sat down with some Olympic moms such as Kerri Walsh and Christie Rampone who are going for the gold this summer, along with celebrated Olympians Shannon Miller and Summer Sanders who plan to broadcast live from the upcoming games. Read on about 5 inspirational Olympic mamas.

Volleyball superstar Kerri Walsh, 33 – known as “Six Feet of Sunshine” – is feeling “stronger than ever” for the London games! The two-time Olympic gold medalist and her partner Misty May-Treanor are going for the gold in their fourth Olympic appearance this summer. Kerri is also busy playing the role of mom for her two young sons Joey, 2, and Sundance, 1.

“I definitely feel more ready and stronger than ever,” Kerri said of the upcoming summer Olympics. ”There is so much hope and enthusiasm right now, and the Olympic spirit is picking up in the United States. We also have a new coach added to our coaching staff, so we are learning so much and breaking down bad habits. It is very exciting to be growing in all the right ways, and we are really focused, determined, and happy. It’s a really great combo.”

And don’t discount a fifth Olympic appearance! “I think it would be amazing to win a gold medal in Brazil,” Kerri said.

Soccer star Christie Rampone is set to compete in her fourth Olympics this summer. And the team’s captain couldn’t be more excited to have her family-of-four cheering her on!

“Reece (2) and Rylie (6) will be going to London with their dad and some of my family and friends,” Christie said. “It means the world to me and it will be exciting to see them wearing the red, white and blue with plenty of face paint and hair coloring!”

Considered one of the greatest gymnasts in U.S. history, Shannon Miller holds 7 Olympic and 9 World Championship medals. Now mom to 2-year-old son Rocco, the 35-year-old athlete opened up about supporting the Team USA‘s Raise our Flag initiative, and the gymnasts to watch this year.

“I’ll be in London as an analyst,” she said. “I’m so excited for Team USA. Jordyn Wieber is the current world champion moving into the Olympics so she will certainly be one to watch. Gabby Douglas has surprised many this year. Aly Raisman and McKayla Maroney are names that continue to be in the mix for one of the top spots on the team. Of course we have quite a few from the 2008 Olympic Team making comebacks including Nastia Liukin and Bridget Sloan. With only a five person team this year it will be all about staying healthy and being consistent.”

Nearly twenty years ago, Summer Sanders made swimming history at the 1992 Olympic Games in Barcelona, winning four medals, including two gold. Now the mom of daughter Skye, 6, and son Spider, 4, will be commenting for Yahoo!Sports at the Olympics this year in London.

“I will be broadcasting with Yahoo. I’ve been doing a series already called Elite Athlete Workouts,” Summer said. ”We did it with a bunch of different athletes and now we’re focussing on Olympians. Then I’ll do swimming coverage over there for the first eight days. The following nine days will be following every story under the sun. We’ll cover inspirational, fun stories, night life at the Olympic games, I’ll have my kids there so we’ll cover experiencing the games with family. We’ll feature Team USA and the Americans who have come over. My hope is that everyone catches the Olympic fever and understands what the Olympic spirit is all about.”

Brandi Chastain is a professional soccer defender and midfielder who plays for the team California Storm of Women’s Premier Soccer League and is a former member of the United States women’s national soccer team. The mom to sons Cameron, 23, and Jaden, 5, opened up about broadcasting for the upcoming London games.

“I will be doing the commentary for NBC for the Olympics,” Brandi said. “As a professional in broadcasting, I am just hoping for a really good Olympics. Last summer for the World Cup, every single game was competitive. Every game had an impact on who finished in the groups and who made it to the knockout round. I am looking for a great tournament with a lot of skill and athleticism. I think the key match-ups will be anyone that plays Japan, because right now they are playing the best soccer that anyone’s seen in the world. It is a call to action for the U.S. women’s national team.”