5 Celebrity Moms With a Brood of Boys

Let’s hear it for the boys! 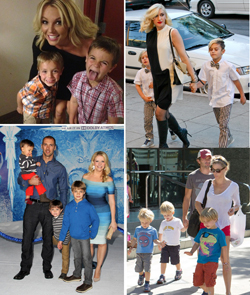 With the recent arrival of Gwen Stefani and Gavin Rossdale third son – Apollo Bowie Flynn –  let’s take a look at four more Hollywood moms whom have all boys in their brood.

In January, the Cool singer – already mom to sons Kingston, 7, and Zuma, 5 – revealed that she was expecting another boy. Wearing a blue shirt and crown, Gwen captioned an Instagram photo: “I was ready to hand over the crown. But I guess I am still queen of the house. #itsaboy #surroundedbyboys.”

In 2010, the No Doubt frontwoman admitted that her brood of boys is a bit “weird.”

“I mean, it does seem weird that I don’t have a girl, but I feel like I’m running out of time,” Gwen shared. “I also don’t want to spread myself so thin that I can’t even be good for them… Poor Zuma, he’d be the middle guy. I’m not focusing on it right now, but it’s not up to me anyway, you know? These things are miracles, so we’ll see. Otherwise, the clothes are probably going to go to some girlfriend of Kingston’s!”

“I was actually relieved it was a boy,” Melissa told Celebrity Baby Scoop.

She added: “It makes life a little easier. I wasn’t prepared for the ‘girly’ toys and accessories. I couldn’t be more happy with the family I have surrounding me but I’m not ready to say I’m done having kids just yet.”

“Having boys is great,” the Elizabeth star said. “It’s a neat position to be in and I love the high energy that comes along in raising boys. It’s fun.”

“I have three boys, so my house is … rowdy!” she joked with Celebrity Baby Scoop.

She added: “They are close in age, so they really do like playing with one another, and so far, get along very well. I hope that continues.”

While she loves her boys, pop superstar Britney Spears says she’d love to give her sons —Sean Preston, 8, and Jayden James, 7 — a baby sister.

“I would like to be busy the first couple of years, but then I would really like to have another baby, a girl,” Britney admitted.

She added: “I think she would be like a mini-me. I think it’s going to be crazy. I’m not going to feel as alone in the world anymore. I’m going to feel like I have a second person, like, that’s me.”