5 Celebrity Grandparents: The Joys Of Generations

Let’s hear it for Grandma and Grandpa! 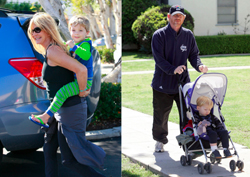 In celebration of National Grandparent’s Day on September 8, we’re taking a look at five famous grandparents and their joys of watching the generations grow.

Grandpa Garth, 51, has since issued a statement since his first grandchild’s birth:

“Our family would first like to thank everyone for their warm wishes and sweet celebration of Baby K’s arrival,” he said. “Our children’s lives have always been extremely private and they have been endlessly encouraged to be their own people. We have always wanted them to be individuals and NOT be known as ‘someone’s daughters.’”

He added: “I have been amazed and grateful how the press has always respected this. I now ask that respect to please continue as this young family begins the greatest days of their lives.”

After the recent birth of her fifth grandchild – her only granddaughter – the Academy Award-winning actress announced the joyous addition to her growing family.

“Welcome Rio! Our first baby girl to join our family!” Goldie proudly tweeted. “Oliver and Erinn thank you for bringing so much JOY to our lives! #happiness.”

According to the Private Benjamin star, being a grandmother is “Love with a capital L!”

“[I hope to teach them] to become as resilient as they can,” she added. “We all get knocked down, but the measure of the man is how fast you get up. And I think that’s what I’d really like to instill in the kids. We’re all going to fail, we’re all going to mess up, but it’s not as much about that as it is learning from your mistakes and getting up real fast.”

Alana, 68, recently talked to Celebrity Baby Scoop about the joys of being a “Nana” and her “strong-willed” granddaughter.

“I just spent most of the weekend with Kimberly, my daughter, helping her with Delilah,” Alana said. “She’s been a full-time mother 24/7 and by the weekend she really needs Nana (that would be me!) to give her a break now and then.”

She added: “Delilah is a barrel of energy. She’s just adorable and quite a little character. She’s very strong-willed, stubborn, and doesn’t like to take “no” for an answer. I guess you could say it runs in the family.”

Legendary filmmaker Ron Howard and his high school sweetheart, Cheryl, have been married for 38 years. They are proud parents to four grown children and two grandchildren.

The Happy Days alum, 59, opened up about the “profound” experience of being a grandfather.

“My daughter Bryce has a son … and I love being with him,” Ron gushed. “I didn’t remotely understand how profound the experience of being a grandparent is until you become one. It’s interesting, when you become a grandparent you start bumping into other folks who have had that experience. And there’s this sort of wink and a nod like it’s sort of a club or something.”

With both Emmy and Tony awards to her name, Blythe Danner has played many memorable parts over the years. But it sounds as though her favorite role to date just might be that of doting grandmother.

The Meet the Fockers star, 70, said she loves the time she spends with her daughter Gwyneth Paltrow‘s kids Apple and Moses.

“I don’t feel like a grandmother with them,” she gushed. “I get on my hands and knees and act like a complete fool! We have a lot of fun together.”

And it sounds like she’d love the whole family – including famous son-in-law, Coldplay frontman Chris Martin – to live a little closer.

“I would love them next door, banging away on the drums, and Chris writing new songs,” she added.