In the land of fame and fortune, the limelight can be a bit too blaring for some high-profile families. 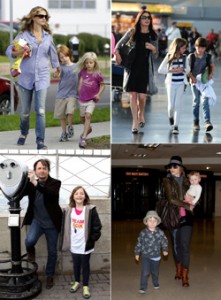 From Oscar winners Catherine Zeta-Jones and Michael Douglas to the Pretty Woman herself Julia Roberts, CelebrityBabyScoop takes a look at 5 celebrities who opted for a peaceful and low-key locale outside of Tinseltown.

The family-of-four reside on a farm with four goats and no nanny. They rely on the help of family members when they require a babysitter.

“In another life, I was a shepherdess,” the mom-of-two said.

“I like being off the grid,” the Up in the Air actress added. ”I want to be self-sufficient and live off the land. I’ve become a farmer in my spare time. It’s really sort of a great place where I can be centered and have a great perspective on what it is I want and need.”

“It’s peaceful, and it’s a relief,” Julia said of raising her family away from the spotlight. “I always say you can’t be in a bad mood here. I don’t know if it’s New Mexico or just the mountains, but you can’t be silly in a negative way. You can be silly in a fun, whimsical way, but the petty, trite things that make you go, “Oh, God, it’s not the right size” or “Why is this happening like this?”—that kind of stuff doesn’t exist so much here. Everything is kind of clear.”

Actor and Parkinson’s research advocate Michael J. Fox and his longtime love Tracy Pollan have raised their four kids – Sam, 23, twins Aquinnah and Schuyler, nearly 18, andEsmé, 11 – outside of the limelight.

“We made a decision really early on, before the Parkinson’s diagnosis, that we’d move back East,” the Back to the Future star said.

“We’d just bought a house in Bel Air [Los Angeles], but we never moved into it,” Michael added. “We had an awakening one day that we don’t want to raise our kids in an environment that’s largely show business and built on whose father had a bigger opening weekend. It seemed fraught with peril. New York seemed like a better bet. There’s much more variety in the people that they meet and the relationships they have [in New York]. It’s much more real. They don’t live in a bubble. And I know where my kids are all the time.” He adds, “We have a responsibility to make sure that they’re good people, not destructive; that they’re contributors who don’t feel entitled. They’re good kids. I can’t imagine reading about them [in the tabloids].”

Jamie Lynn Spears was just 16 when she had one of the most high-profile teen pregnancies in Hollywood history. The lil’ sister of popstar Britney Spears escaped the public eye and moved home to Mississippi to raise her now 4-year-old daughter Maddie Briann.

“Was it hurtful for my parents to read stuff about their daughters? Yes. Obviously seeing [sister Britney Spears’ negative tabloid coverage], I knew how far it could go,”Jamie Lynn, now 21, said.

“I’ve never wanted to be put under that kind of scrutiny,” the young mom added. “I just wanted to get away from it as much as I could, to just go away and be a mom and figure out what I wanted, and to earn a sense of respect back for myself. Move to a town in the middle of nowhere and just raise my child. All I could be was a good mother. If anybody had anything to say after that, there was nothing I could do.”

“It was to etiquette the kids and just to come back and enjoy this fantastic city we’re able to live in,” she said.

However, the loss of anonymity took some getting used to for their two children, son Dylan, 12, and daughter Carys, 9.

“Well, for them, they were naked opening the back door — so was I — and just running out naked into the garden and it’s really hard to do that in Central Park,” the mom-of-two said.