10 Celebrity Parents On The Coffee Run

Some of our favorite celebrity parents are just like us — addicted to the java! 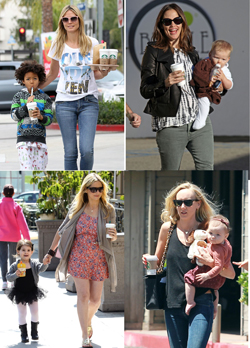 The Crazy Ones actress Sarah Michelle Gellar is often seen fuelling up with caffeine. The actress and her daughter Charlotte were seen sharing a laugh as they grabbed a quick coffee after ballet class in Los Angeles in December 2012. The Ringer star toted her then 2-year-old tot as she played with a teddy bear.

“Everything is Starbucks. [Charlotte says,] ‘We need to go get coccee,’” Sarah shared.

The Buffy alum went on to say, “I don’t let her drink it!”

She added: “But Child Protective Services will get called one day because she likes to get water, but in a hot cup so it looks like she’s drinking an espresso!” she laughed. “They give her those little cups and then she runs around the store. We’ll be driving home at six o’clock at night and she’ll be like, ‘Mama need coccee?’”

Wedding Crashers star Isla Fisher and her daughters Olive, 5, and Elula, 3, were seen in Studio City, Calif. on August 14. Sporting leggings and a hoodie, The Great Gatsby actress stepped out for drinks with her girls at Coffee Bean.

Rockstar papa Joel Madden stepped out with his two kids – daughter Harlow, 5, and son Sparrow, 3 – at The Coffee Bean & Tea Leaf in Hollywood, Calif. on June 9. Joined by a pal, the trio were not seen with mama Nicole Richie.

Bon Jovi star Richie Sambora and his 15-year-old daughter Ava stopped by Starbucks in Calabasas, Calif. on May 25. Both held trays of beverages and were all smiles for the cameras.

Grammy Award-winning singer Pink and her hubby Carey Hart had a relaxing afternoon with their then 1-year-old daughter Willow on January 11. The trio stopped in at a local coffee shop in Venice, Calif. to grab a warm beverage.

Mom-of-three Jennifer Garner took Seraphina to breakfast at the Brentwood Country Mart on April 16. Wearing all pink, the 4-year-old walked along eating her treat while mom carried her coffee from Caffe Luxxe.

Jennifer’s not the only one in the family with a coffee addiction! Argo star Ben Affleck and his mother Chris were photographed with Seraphina at the Brentwood Country Mart in November 2012 where Ben grabbed an iced coffee to go.

Single mom Kimberly Stewart and daughter Delilah made their usual Starbucks stop in Beverly Hills, Calif.on June 9. Then nearly 2, Delilah was seen wearing mostly pink while mom carried her tot and her beverage.

Project Runway star Heidi Klum and her bodyguard beau Martin Kirsten took her four kids –then Leni, 8, Henry, 7, Johan, 6, and Lou, 3 – to soccer on February 2. All of the kids strapped on their cleats and practiced their skills in Brentwood, Calif. Later that same day, the group were seen at lunch and grabbing some coffees to go.

Actress Kate Hudson and fiancé, Muse frontman Matt Bellamy, were all smiles as they strolled with their then 5-month-old son Bingham in London, England in December 2011. The trio were spotted after enjoying breakfast at Violette Cafe in Belsize Park. On their way home, Matt carried some coffees to go while Kate pushed their baby in the buggy.