With new mom Beyoncé among the celebrity moms who have no qualms about breastfeed in public, we’re taking a look at 10 high-profile mamas who love nursing their babies. 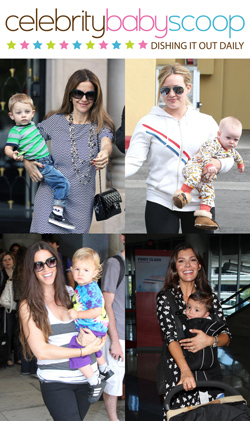 Proud breastfeeding mama Pink says “I don’t give a sh*t what somebody else thinks” when it comes to nursing her 15-month-old daughter Willow, while new mom Snooki says breast milk is “best” for newborn son Lorenzo. Read on about Hollywood’s nursing mamas.

Pink is a proud breastfeeding mama! And she’s ready to stand her ground against anyone who criticizes her for doing so. During a recent radio interview, the Grammy Award-winning singer recounted an altercation at a restaurant she visited with her husband and their now 15-month-old daughter Willow.

“The first time we went out to a restaurant, there was a guy who walked by, I had a cover on and it’s called a Hooter Hider,” the Blow Me (One Last Kiss) singer said.

She added: “I had a Hooter Hider on and this guy walks by and was like, ‘Uughhh.’ He was just disgusted. I was like, ‘You didn’t get enough hugs when you were little.’ Carrie said, ‘You are starting fights in restaurants?’ I said, ‘I will… I will fight, hold by baby.’”

“I think breastfeeding is healthy and natural and it’s a comfort to my baby, so I can give a sh*t what somebody else thinks,” Pink said.

New mom Snooki has been sharing pic after pic of her sweet 5-week-old son Lorenzo. And it turns out the reality TV star has changed her tune about breastfeeding.

The Jersey Shore star, who is engaged to Lorenzo’s father Jionni LaValle, told one of her pregnant Twitter followers, “All the pain and anxiety is so worth it!!!”

The pint-sized reality starlet confessed in June that she was “scared” of breastfeeding because it “looks so painful.” She added, “It’s kind of like you’re a cow and you’re just milking.”

But the new mom has had a change of heart! “I love nursing my little man!” she recently said.

“He holds his bottle like a champ,” the Jersey Shore star, 24, posted via Instagram. Presumed to be pumped breast milk in Enzo’s bottle, Snooki tweeted about the benefits of breastfeeding.

When a fan asked, “Does breastfeeding really burn like a zillion calories?,” the reality TV starlet tweeted,

“I’ve lost a lot of my baby weight! Also it’s the best for him!” Snooki wrote.

Although the industry expects supermodels to regain their svelte figure immediately, Miranda said her first priority was breastfeeding her babe.

“I didn’t feel pressure to snap back into shape,” she said. “My priority was just having my son and breastfeeding, which was something I really wanted to do, and it came easily.”

And she extended breastfeeding, nursing Flynn past his first birthday.

“I’m actually still making milk now but, you know, he’s got teeth,” she said when Flynn was 17-months.

“It will make your baby healthier, stronger and smarter,” she claimed of breastfeeding on demand.

She even shared some of her best breastfeeding advice for our readers.

“Whatever you do, do no…I repeat do not listen to the nurses at the hospital who try to push formula while your milk comes in,” she urged. “Colostrum is the best thing for your baby and though it will be painful, difficult, exhausting and very challenging let your baby suckle all day and night if need be to stimulate your milk.”

She added: “I still nurse Xander on demand and believe it’s always the best way. My original goal was one year but Xander has no idea he just turned one and to him it’s just another day he’d like to be nursing. He loves to nurse and I love to make him happy so I have no plans to wean anytime soon.”

The newly single mom spoke out about breastfeeding her sweet son.

“The only time he cries is if he’s hungry,” the Anger Management actress said of her baby boy. “We all have nipples. I don’t care who I offend; my baby wants to eat. If I can’t get a cover over me quick enough, so be it.”

Hollywood Mom’s Night star Ali Landry is a busy mom of two young children – daughter Estela, 5, and son Marcelo, 11 months – and recently opened up to Celebrity Baby Scoop about the joys of breastfeeding.

“Nursing has been one of the most amazing experiences for me – so intimate and special!” Ali shared. “It has been a blessing to spend such quality time with both Estela and Marcelo, and thankfully Alejandro and I learned a lot through breastfeeding Estela.”

She added: “We are definitely more prepared this time around with Marcelo. Just being prepared for the things that no one likes to talk about, like having insanely sore nipples or wrestling with a breast pump.”

She went on to say that she recently weaned her baby boy.

“Recently, Marcelo began to get some of his teeth in and also began biting, like his big sister,” Ali said. “While I had so many ambitions of pushing through that, it was just too painful and ultimately I had to wean Marcelo off of breastfeeding. I have to say, I think breastfeeding is no small feat and the time I was able to spend with my kids are memories I will hold onto forever.”

Singer-songwriter Alanis Morissette is the latest celebrity mom to weigh in on the parenting style that is making headlines and magazine covers.

“I’m an attachment parent,” the Grammy Award-winning singer, who has a 21-month-old son Ever with rapper husband Mario “Souleye” Treadway, said. “I breastfeed and I’ll be breastfeeding until my son is finished and he weans.”

“I think it affords the child, when he grows up, to have a lot less therapy to go to,” the You Oughta Know singer added. “For me, I protect his safety and his well-being and his attachment. That stage of development is a very important stage.”

Actress Kelly Preston opened up to Celebrity Baby Scoop about the joys of breastfeeding all three of her children.

“I love nothing more than being a mom, and as a moms we are fiercely protective of our kids,” she said. “I know I would do anything to ensure the health of my children. That started from day one, twenty years ago, with that first connection I had with my son the first time I breast fed him,” she shared of her bond with late son Jett.

Kelly, 50, who is mom to 12-year-old daughter Ella and 2-year-old son Benjamin with husband John Travolta, went on to talk about the benefits of breastfeeding.

“Not only did I feel this amazing bond between he and I, but I know that I was giving him something that nothing else on earth could,” Kelly shared. “Mother’s milk is loaded with so much vital protection that your child will never get anywhere else.”

While she initially found breastfeeding “tough,” it’s become a favorite time with her little guy.

Hilary added that it’s taken some getting used to, but it’s been well worth the effort.

“It’s like a lot of things you take on in life,” Hilary told Celebrity Baby Scoop. “You have to experience it to understand. No one can do it for you.”

Singer, songwriter, actress, and now author, Jewel, is a busy mom to 15-month-old son Kase with rodeo cowboy husband, Ty Murray. The holistic mama opened up to Celebrity Baby Scoop about the joys of extended breastfeeding.

“I am still breastfeeding and it is going well,” Jewel said. “Being raised on a ranch, you see what it does for the babies and their health. Kase has been perfectly healthy; he’s never had a cold or anything. So it’s been good. I hate pumping with a passion though [laughs].”

In one of her first interviews since welcoming baby Kase in July 2011, Jewel opened up to Celebrity Baby Scoop about breastfeeding her baby boy.

“The first bit is hard learning how to do it,” she shared. “But once you and the baby get the hang of it, it’s great. For me it’s easier than keeping up with bottles and formula. For me it’s for the nutrition and the fact that breast cancer decreases almost 70% for one year of breastfeeding! And it can go up to almost 90% for two years of breastfeeding. That’s amazing! That’s one of the biggest things you can do to prevent breast cancer. There’s a stat I had not heard before!”

She added: “And also with childhood obesity on the rise, the statistics for breastfed children, it’s dramatically and drastically lower. So those are two great reasons to do it, on top of the fact that, for me, it feels convenient.”

And she has reached beyond her original goal.

“I’d like to do it for at least a year,” Jewel said. “I know the World Health Organization recommends two, but I don’t know if I’ve got two in me [laughs].”