Not everyone can conceive a baby, which makes the option of surrogacy so rewarding. 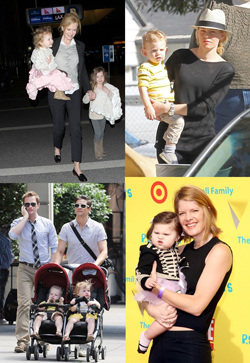 CelebrityBabyScoop is taking a look at 10 celebrities who have used a surrogate mother to expand their families. From Elton John, to Nicole Kidman, to Giuliana Rancic, to Sarah Jessica Parker, let’s hear how gestational carriers have helped change the lives of some high-profile families.

“She is a wonderful, kind and loving woman,” Elton said of their surrogate, who thinks of her as “part of our family.”

The couple used the same egg donor for both boys and have chosen not to find out either of their son’s paternity.

Nicole Kidman and Keith Urban welcomed daughter Sunday on July 8, 2008. But after a “roller-coaster ride with fertility,” the couple used a gestational carrier for their second child, now 2-year-old daughter Faith.

“Having given birth and then being there to see my child born in that way, I felt so much love for our surrogate, gestational carrier,” Nicole said.

The Academy Award-winner went on to discuss why she uses the term “gestational carrier” as opposed to “surrogate” – something she was criticized for in the days following the announcement of Faith’s birth.

“We were trying to be accurate,” she shared. “The term ‘gestational carrier’ is used if it’s your biological child and if it isn’t, then you use ‘surrogate.’ I mean, who knows what it is. But she’s the most wonderful woman to do this for us.”

What to Expect When You’re Expecting actress Elizabeth Banks and husband Max Handelman have welcomed both sons – Felix, nearly 2, and Magnus, 3 months – via surrogate mother.

“Like Felix, Magnus was born via gestational surrogate,” she shared. “This experience has exceeded all expectations, taught us a great deal about generosity and gratitude, and established a relationship that will last a lifetime. I am also so very thankful to our family and friends for their support throughout this process, as well as the Center for Surrogate Parenting for helping make all this possible.”

“It was a womb issue for me. Embryos wouldn’t implant,” she said of her fertility issues. “It’s a big leap, inviting this person into your life to do this amazing, important thing for you. And it’s hard losing that kind of control. But our surrogate is so extraordinary, and she’s still in our lives. She’s like an auntie.”

How I Met Your Mother star Neil Patrick Harris and partner David Burtka are dads to 2-year-old twins Harper and Gideon. The Doogie Houser alum opened up about welcoming the twins via surrogate mother.

“We really, really wanted kids,” NPH said. “We really had thought it through financially, emotionally, relationship-wise. We didn’t just accidentally get pregnant and decide that now we need to make this work. These kids come into our world with nothing but love.”

The handsome couple talked the science behind the birth of the fraternal twins, revealing each father fertilized one egg and the twins were carried and born via one surrogate.

Burtka explained that the twins were conceived by “two eggs, two embryos, one of mine, one of his.”

The couple knew the surrogate, whom Burtka described as “more like the oven.” And they found an anonymous egg donor through a donation bank where they were able to research her personal and medical history.

Ricky Martin welcomed his twin sons, Valetino and Matteo, via surrogate in August 2008.

The Livin’ La Vida Loca singer recalled his path to fatherhood, saying that he first felt the urge to start a family many years ago.

“OK, what are my options? Am I going to adopt? I just sat in front of the computer, doing research, until I found surrogacy, and I was like: ‘Woah! This looks really interesting,’” the sexy singer said. “I interviewed so many people that were part of this beautiful world, and I decided this was going to be my way.”

And what about more kids in the future with his longtime love, Carlos Gonzalez Abella?

Saying that he’d love to have “a daddy’s girl,” Ricky said he plans to go the surrogacy route again soon. “I’ll be steady in New York, and then, after I do the play [Evita], the baby [will be] born, and I’m going to be able to spend time with her.”

“Our family is overwhelmed with joy by these two precious gifts from God,” the Grammy nominated singer said. “The babies are both healthy and resting. Thanks to everyone for their love and prayers.”

The twins joined the couple’s teen children, Hannah and Griffin.

The Sex and the City star spoke very highly of their gestational carrier, calling her “strong, bright, independent, thoughtful, caring, gracious and generous.”

She went on to talk about meeting her daughters – now 3-year-old twins Tabitha and Loretta – for the first time in the delivery room.

“Meeting your children rather than giving birth to them, it’s as if, um, it’s—suspended animation. The gestational experience is gone,” she said. “It’s as if everything else disappears for a moment, and the world goes silent and—I can’t explain it except to say that nothing else existed. I don’t remember anything but the blanket on the bed that they were lying on and my husband’s face and their faces and my son’s. It’s literally as if sound is sucked from the room. Time stands still. It’s so different, and equally extraordinary. I am very poor at describing it. But it’s amazing.”

Emmy Award-winning The Young & the Restless star Michelle Stafford is mom to daughter Natalia thanks to a surrogate mother.

“After a three-year journey through hell, I’m elated, ecstatic and feel ultimately lucky to be able to announce I’m expecting my own child via surrogate in December,” Michelle shared before Natalia’s arrival in December 2009.

After unsuccessful attempts to conceive with several failed surgeries for egg retrieval, artificial insemination and invitro fertilization, the star said the process of trying to become pregnant was “the hardest thing I’ve ever done in my life.”

After a long road to parenthood, Bill and Giuliana Rancic welcomed son Duke in August 2012 via gestational carrier.

The proud new mom gushed to Celebrity Baby Scoop about the experience.

“We had an amazing gestational carrier that we cannot thank enough for all that she has done for our family,” Giuliana said.

After Giuliana’s battle with breast cancer and subsequent double mastectomy, her chances of carrying a child has been delayed.

“We’d have to go down the surrogacy path again,” she said. “Thankfully, before I went on my medication, we did another round of [in vitro fertilization], so we have embryos ready to go.”

After such a positive experience with their son‘s  gestational carrier, Delphine, they would consider her again. “She’s just a good person,” said Giuliana, who regularly texts Delphine and plans to visit her throughout the year.

Broadway actress of the famed musical Hairspray, Marissa Jaret Winokur underwent a hysterectomy at the age of 27 after being diagnosed with cervical cancer. Surrogacy was her “last chance” to become a mother and she has spoken on the decision to use a gestational carrier.

“For people out there who don’t understand surrogacy, it’s very important that they understand it’s not about someone in Hollywood who doesn’t want to gain weight. It’s not like Sarah Jessica Parker didn’t want to have her own baby,” she said. “For everybody that has a surrogate, that was their last chance. That was their last option – that was their only option. It’s the most amazing, wonderful thing, but it’s also a really hard decision to make because you’re trusting the most important thing to somebody. For me, that was the only way I was going to have a baby, so I was like ‘I’m in, let’s go.’ There was no looking back. But for a lot of women, there are lots of different options, so it’s important to figure out what’s the best option for them.”

Mom to 4-year-old son Zev with husband Judah Miller, Marissa said they hope for another baby one day soon.

“We keep trying! We’ve tried a few times now but it’s not working as easily as we thought it was going to,” she opened up to Celebrity Baby Scoop.

“We’ve been working with another surrogate and it just hasn’t been going easy,” she added. “But we’re not giving up yet. It’s a weird thing — now I’m even more grateful for Zev! I always knew it was such a miracle to have a child through surrogacy. It’s such a complex, mad-science thing. But when you have a child, you’re like, ‘See, it works and it’s all meant to be,’ and you forget about all the trauma and all the problems that led up to it. But now we’re going through it again and I’m thinking to myself, ‘Oh my gosh, we were really lucky!’