The happy couple are getting ready for the season premiere of Tori and Dean: Home Sweet Hollywood Tuesday on Oxygen. In tonight’s episode, viewers will see the posh baby shower Tori threw for her goddaughter, The Guncles‘ now 1-year-old daughter Simone. We also get a glimpse inside Tori’s hoarding problem. “I prefer the word collector,” Tori jokes with Celebrity Baby Scoop. The happy couple also chat about their “hilarious” older kids – Liam, 4, and Stella, 3 – the secret to their successful and “supportive” relationship, how they really feel about the ever-present paparazzi, and Tori’s feelings on losing the baby weight this time around. 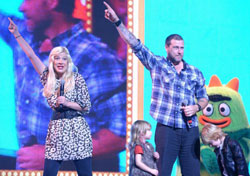 CBS: Congratulations on baby Hattie! Is she the easiest baby yet? Is she sleeping?

Tori: “Thank you! No, Liam still wins out in that category. He literally didn’t cry – I’m not joking – until he was 9 months old! Never cried about anything – diaper, feeding, nothing! It was pleasantly weird!

Hattie had a little bit of colic at first which was new for us because neither Liam or Stella had that. She had a bit of tummy trouble, but now she’s settled and she’s sleeping through the night almost.”

CBS: How are you adjusting to the family-of-five?

Tori: “It was a pretty easy adjustment. With two toddlers running around, Hattie is the easiest! She doesn’t do much – she sleeps, and eats and poops. She’s a trooper and has adjusted right away. When you have more than one child, you don’t live your life around them. You have the kids adjust to your lifestyle which is a lot easier. So she just fits right in with the kids who are running around and screaming. She sleeps right through it and comes everywhere with us. It’s great!

And the kids have been super helpful and they’ve adjusted right to her – it’s been great! You never know what to expect. With the older children you try to prepare them as best you can. But they’ve been great. Liam’s a huge helper. No jealousy…yet. We thought maybe Stella would be jealous because it was another girl, but she loves to style her! She loves to pick out her clothes so that makes her feel a part of it.”

CBS: How was your third birth?

Tori: “It was fine. Hattie was almost a week early. It was a shock at first, but everything went smoothly. The biggest shock about it was that we didn’t know the sex and we thought for sure we were having a boy! So the biggest thing about the birth that we remember was the fact that we were told, ‘It’s a girl!’

Dean: “The first birth was an emergency C-section, and then having two others so close it was risky to have the VBAC.”

In the rest of the interview Tori talks about breastfeeding, the pressure to lose the baby weight and Liam’s fart jokesJ.  Click here to read it.