The Pros & Cons Of The Paparazzi

There are some experiences that are unique to celebrity parents alone. 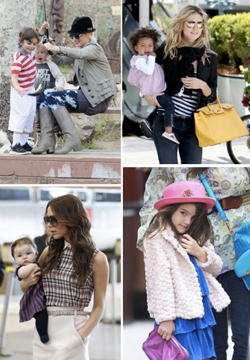 Sure, there’s the perks of full-time nannies, house cleaners and gourmet chefs! But with the fame, comes the invasion of privacy…and the paparazzi. Whether they’re waiting at LAX for the jet-setting Beckham family-of-six, or following Heidi Klum and her kids to a local playground, the shutterbugs are never too far from the perfect snapshot. But how do celebrity families deal with their daily presence?

Read about 5 high-profile couples who weigh in on the pros and cons of the paparazzi.

Rockstar parents Gwen Stefani and Gavin Rossdale have been outspoken about the ever-present paparazzi in their daily lives. The mom-of-two boys – Kingston, 5, and Zuma, 3 – recently admitted there are good and bad parts about having the paparazzi follow her and the family around.

“What’s nice is even though they’re annoying, these guys that follow us around, it’s really nice having all these family photos!, Gwen said.”

The singer/fashion designer also said she worries about the possible dangers of raising her family in Tinseltown.

“The kids, their privacy, a responsibility for them and not knowing if this is going to ruin their lives,” Gwen contemplated about their high-profile life. “They’re so exposed and they don’t have a choice – that scares me a lot. But I think it’s going to be fine,” Gwen added. “My children are very loved. Hopefully, they’re going to grow up and not be crazy because of it. I don’t think there are that many sacrifices – I really don’t want it all to go away.”

Gavin has also talked about the lurking presence of the paparazzi in their day-to-day lives.

That being said, the Bush rocker can’t deny that the shutterbugs can take amazing snapshots from time to time. He recalled a conversation with his mother Lucy who praised the paps for a sweet shot of her gorgeous grandson.

“She goes, ‘I saw a great picture of you guys.’ I played a show in L.A. and there’s a picture of Kingston at the sound mixer – he’s wearing a Rasta hat, he’s got sunglasses on and he’s got a microphone that’s switched off – but he’s singing. My mom’s like, ‘Did you see that picture? That was the best picture!’ I was like, ‘Yeah, it was a paparazzi picture.’ And she says, ‘Yeah, but if we didn’t have that we wouldn’t see what you’re doing.’”

Whether in Europe or North America, power couple David and Victoria Beckham are more than well acquainted with the paparazzi. How does Posh and Becks deal with the nonstop presence of the paps? The mom-of-four said she tries to boost her kids’ self-esteem when explaining the shutterbugs.

“I don’t complain about paparazzi because I’ve put myself in that position, and so has David,” Victoria said. “But I always say to the boys, someone is going to take your picture because you’re handsome or you’re smart or because you’re so good at soccer. But every now and again, Romeo might pick up one of David’s cameras and say, ‘Victoria, Victoria, over here!’ And his attitude is sort of angry.”

While most stars have a rocky relationship with the paparazzi especially when their children are being photographed, Tom Cruise said how much he admires some of the shots taken of his beautiful daughter Suri, 5, with wife Katie Holmes.

“I have to say some of those paparazzi shots of my daughter are incredible,” Tom said. “As a parent you protect your children but Suri is a very open and warm child and she will just wave to people on the street. She is such [a] happy, fun girl. It is certainly different these days with the media, but people have been very good to us and do give us space so I am not going to be difficult.”

Reality TV stars Tori Spelling and Dean McDermott – parents to son Liam, 4, and daughtersStella, 3, and Hattie, 3 months – recently sat down with Celebrity Baby Scoop and weighed in about the “fine line” that the paparazzi walk in their high-profile lives.

“It’s a fine line,” Tori said. “I know it comes with the territory. I’m OK with it when the paparazzi don’t cross the line. When they came to the school, to me that crossed the line. We tell them to please stay away from the front of our house. It’s all about the safety of our children. If we’re out at the market or shopping with the kids, that’s fine. Do you know what we say to them all the time? We say, ‘Take your picture and let us be.’ And sometimes they’ll just stand in front of you walking and take like 100 photos. It’s like, ‘You’ve got your photo, why don’t you just go and we can go on and have somewhat of a private day.’ I wish there was that kind of a compromise,” she said. “A lot of them are great, but a lot of them you can’t reason with. So what can you do? And the fun and innocent pictures of the kids online I think are cute. Babies are cute – kids are cute!”

Recently separated power couple, Heidi Klum and Seal, always cause a commotion when they’re spotted out and about with their four children: Leni, 7, Henry, 6, Johan, 5, and Lou, 2. The mom-of-four opened up to Celebrity Baby Scoop about the “not-so-convenient” paparazzi and how they sometimes cause other moms to break out the “stink eye.”

“I wouldn’t say they drive me nuts all the time,” Heidi said of the paparazzi. “Sometimes they do, sometimes they don’t. It always depends on the day and where we are and what we’re doing. It definitely is a little bit not-so-convenient when you’re just doing normal things.” She added: “I understand the purpose of them when you go to an event and you’re on the red carpet. The press is there to document and show people what you’re doing. But I think that when you’re out with your family…. you’re at the park, and then you get all the stink eye from all the other moms! I just think ‘Really why is this happening? Why are all these people here and taking photos of our children which is really putting us in an inconvenience?!'”

The model mom went on to talk about the negative impact their shutterbugs can have on their kids.

“The other moms always give me the stink eye, and then I feel bad,” Heidi said. “So half of the time I will just leave and go somewhere else. You don’t feel too good about those moments when you get stink eye from all the other moms. And the thing is, we don’t understand half of the time what is so interesting about the same photos of us at the park. My children are just like other children too and they love going to the park.”

Heidi went on to say she still hasn’t found the right words on how to explain the paps and their nonstop presence to her young children.

“It’s hard to explain!,” she said. “Thank goodness they haven’t asked that much about it yet. I haven’t been in the situation yet where I have to explain. They look and they see people taking photos, but they don’t really ask too much about it. They’re still little and I hopefully still have a little bit more time to figure out exactly how to explain to them.”

Celebrity Parents on Date Night at the Academy Awards

Best Celeb Pics of the Week