In honor of Father’s Day this Sunday, we’re taking a look at some of Hollywood’s leading men from father-of-two Freddie Prinze, Jr., to new dads Nick Lachey and Bill Rancic, to dad-of-one Richie Sambora, and father-of-five Chris O’Donnell. 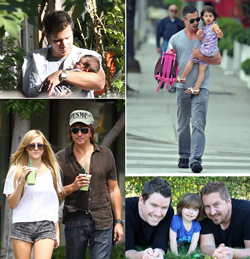 We’re highlighting 16 proud papas who share their upcoming Father’s Day plans, the joys of fatherhood, and their cherished family memories.

The Bon Jovi rocker opened up to Celebrity Baby Scoop about the joys of fatherhood and his plans on Father’s Day.

“I’m very lucky because to me, every day that I spend with my daughter is Father’s Day,” the proud papa gushed. “She is my diamond. No matter what happens there is a joyful energy around us. My favorite thing in the world is her.”

He went on to talk about his late father, whom he continues to cherish.

“I celebrate by thinking about my dad and all the gifts he’s given to me,” he shared. “He was non-judgmental, good natured and had good humor and morality. I also celebrate by going out on a daddy-daughter date.”

What has fatherhood taught the award-winning guitarist?

“A lot of things to mention here but, I guess truly, how to love unconditionally,” Richie said. “I’ve learned to take responsibility, be flexible, and have respect for my parents for what they’ve given me.”

The Sister, Sister alum, 34, spoke about her hands on hubby.

What makes her hubby such a great dad? “Aww, that’s such a great question!” Tia gushed. “No one has ever asked me that.”

“What makes my husband a good dad is that he’s very aware,” she added. “Let’s say I’m exhausted from working all day. He’ll see that and say, ‘You know what, Tia? I’ll go ahead and take care of Cree and give him a bottle when he wakes up in the middle of the night. Why don’t you go to the other room and get a few extra hours of sleep?’ He’ll also say, ‘Alright Tia, go take a nap. I’m going to take Cree to the park.’”

She added: “I think ‘considerate’ is the best word to describe my hubby. That’s what makes him a good dad. He’s aware and he also takes the time to play with Cree. He’s very proactive, which I think is awesome.”

SMG opened up to Celebrity Baby Scoop about their thoughts on celebrating Father’s Day.

“We always say that every day is Father’s Day and every day is Mother’s Day so we don’t make a big deal out of that specific day,” the Buffy alum shared. “And we always spend the weekends together as a family anyway.”

The actor-model, 41, recently talked about the joys of fatherhood.

“Everything!” Antonio gushed on what he loves about being a dad. “It’s a constant responsibility—everything that I do, every move that I make, is for the well-being of my family. All of my decisions are made with them in mind, and they are the most important part of my life.”

“In past years, Simone and her Nana took us out to brunch,” Scout said. “Since Simone is 3-years-old now, we’d like to do something a little more fun – like mini golfing!”

He added: “We feel so blessed to be dads, that everyday truly feels special to us.”

In honor of Father’s Day, The Good Mother actress Helen Slater dished to us about her devoted husband, Robert Watzke.

When asked what makes her hubby such a great day, she shared, “His devotion to the family, sense of humor, and kind nature,” she also said. “It helps that he’s from Iowa City [laughs].”

The Client List’s Elisabeth Röhm – who raises 5-year-old Easton with fiancé Ron Anthony – recently had this to say about her partner in life.

“Easton is Ron’s top priority, and that is obvious,” she shared. “He shows her plentiful love and affection, and it’s clear that everything he does is for her and our family. She knows it as well, and I think that’s important.”

The Scent of a Woman star, 42, told us what Father’s Day means to him.

“It means spending time with my family,” he said. “I also plan to play golf without a trace of guilt. Some of my most memorable gifts from my kids have been homemade cards – my kids putting their feelings into words.”

The Bachelor alum, 30, boasted about her “hands on” hubby.

“Oh my gosh, I lucked out on the daddy department,” she gushed. “I have to say, the fact that he’s hands on, that he wants to be involved, that he enjoys daddy daughter time, is just such a blessing. I know that I’m very, very lucky. Just seeing him with her and seeing how she responds to him, it definitely makes you fall in love a little bit more.”

The singer-songwriter, 52, opened up about what makes her famous hubby, 56, a great dad.

“He is good at lightening the mood. He enjoys teasing, and I think that’s a good thing,” she shared.

“I’ll tell you what makes him a good stepfather,” Amy continued. “He has three stepchildren and he gave them all their space and didn’t pretend like he was their choice. He was their mommy’s choice, and slowly over the years they grew to love him.”

The Everwood star, 45, spoke about fatherhood, the favorite role of his life.

“[Father’s Day] means celebrating my favorite (tied with husband!) role in this life,” he gushed. “Hopefully it means breakfast in bed and a relaxing day with the family. Every day with these too beautiful boys feels like Fathers’ Day to me.

“It has changed me for sure. It literally affects everything you do, every decision you make,” Nick said. “Your priorities completely shift and your kids instantly become the most important thing in the world. I think it’s made me a more patient person as well.

“My greatest joy is waking him up every day,” he added. “Seeing that little boy look up and smile at me every morning is the perfect way to start my day. The biggest challenge is having enough time in the day to do everything I need to do.”

The first-time dad gushed about the joys of fatherhood.

“Being a father is awesome and everything I could have hoped for and more,” he shared.

“I want to plan a very special Father’s Day since this will be Bill’s first,” Giuliana said.

She added: “Since we’re spending Mother’s Day in LA, I’d love to plan an exciting weekend in Chicago – Bill’s hometown – with both of my boys. Depending on the weather, I’d love to start off with a run with Bill and Duke in the jogger along the lakefront. It would be really nice to walk to the zoo, some museums, and then top the night off with dinner at RPM Italian.”

The Grammy Award-winning singer happily shared this about her “dedicated” and “hands on” husband.

“My husband’s a very dedicated dad,” she gushed. “He doesn’t want to work or do anything but stay at home and help with the baby. He’s a very hands on dad, which is a great thing about him.”

The television personality, 51, talked about how fatherhood has changed him.

“It has increased my patience by a factor of about fifteen, and it has also made me increasingly aware of the problems I have with my own selfishness,” Andrew shared. “When I am just thinking about me, I am not being very useful to my son or my wife. Having a child is a supreme motivator in that regard.”

Happy Father’s Day to all the fabulous dads out there!