With the recent news that Don Johnson and Melanie Griffith‘s daughter Dakota Johnson, 23, will star as Anastasia Steele in the much anticipated film adaptation of Fifty Shades of Grey, we’re taking a look at 5 celebrities and their very own rising stars. 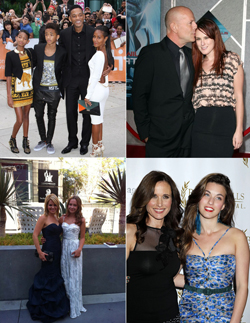 If you were in show business, would you want your children to follow in your footsteps? Check out which celeb parents have encouraged their children to enter the wild world of fame and fortune.

Her grandmother, Tippi Hedren, was one of Hitchcock’s cool blondes and starred in Marnie and The Birds, and her mom was nominated for an Academy Award for her performance in Working Girl.

And just like her famous mom, Dakota was a Miss Golden Globe.

But on Monday, author E L James Tweeted, “I am delighted to let you know that the lovely Dakota Johnson has agreed to be our Anastasia in the film adaptation of Fifty Shades of Grey.”

Dakota is a model-turned-actress who has been seen in The Social Network and the short-lived sitcom Ben and Kate.

While Justin lives in Montana and training to be an English teacher, her two daughters are breaking into the business.

The youngest – just known as Margaret – is a model.

“Wherever she ends up, I know I’ll never have to worry about her,” Andie said of her youngest child. “I let her move to New York City alone aged 16, because I knew it was right for her. She’s just a really good kid. I think it’s partly the discipline from dancing and partly her personality, but I’ve never had to tell her to do her homework and never had to worry about her getting in trouble.”

She added: “She’s so reliable and motivated. She’s really got her head screwed on.”

Meanwhile, Rainey bestowed the title of Miss Golden Globe in 2012, and has starred in Mighty Fine,Falcon Song and Mothers Day.

Will Smith and his wife Jada Pinkett Smith are all-for their kids entering the family business. Both of their children – son Jaden, 15, and daughter Willow, 12 – have graced the big screen.

Jaden costarred with his father in The Pursuit of Happyness, appeared alongside Keanu Reeves in The Day the Earth Stood Still, and starred in the remake of the Karate Kid. Willow made her acting debut alongside her papa in I Am Legend and later lit up the big screen in Kit Kittredge: An American Girl.

So what does Will think of his kids entering the family business?

“She has a drive. She has an energy and she just connects to human emotion,” Will said of his daughter. “I think a big part was probably [seeing] Jaden after The Pursuit of Happyness. She saw what Jaden did, and she was like, ‘I want that,’” Will added. “Jaden is [like] Johnny Depp. He just wants to do good work . . . He loves acting, he just wants to make good movies,” Will said and joked, “and Willow is Paris Hilton. Willow wants to be on TV.”

Will has also addressed his kids’ fame and fortune.

“It may seem like we have pushed our kids into the business, but that is absolutely insane,” he said. “I would never, ever, push somebody to have their face on a poster that’s going be everywhere in the world. He is making a choice from the informed. It’s less scary to me than if he wanted to be a dentist in that I couldn’t help with what he’d chosen. I have relationships with some of the biggest filmmakers and actors and producers on Earth. So I can be a huge help.”

When Full House star Candace Cameron Bure sat down with Celebrity Baby Scoop, the busy mother of three said that her daughter Natasha has caught the acting bug while her son Maks hopes to be a hockey star just like papa Valeri Bure.

“Our kids are making that choice for themselves, and it seems they are following in both our footsteps,” she said. “My daughter wants to act, and we’re allowing her to audition. My son Lev wants to be a tennis player, and Maks wants to be a hockey player. They’re all pretty determined and focused to pursue those goals.”

She added: “We’re supportive of whatever they choose to do, as long as they work hard and put all their effort into it and not quit when it gets rough.”

Bruce Willis has three daughters – Rumer, 25, Scout, 22, and Tallulah, 19 – with ex-wife Demi Moore. Bruce has talked about his eldest daughter Rumer who has acted in films such as Now and Then and Striptease and TV shows such as 90210 and Sorority Row.

Turns out Bruce not only supports Rumer’s acting career, he also thinks she’ll make her way through the limelight of Hollywood without a problem.

“Rumer’s not only got the [acting] bug, Rumer’s successful — and she’s got a great head on her shoulders,” Bruce said. “[She] wasn’t raised in Los Angeles, so she knows the difference between the illusion of Hollywood and what real life is.”