Preemie: Lessons in Love, Life and Motherhood By: Kasey Mathews

Preemie is a story of one family’s struggle to raise a one-pound, eleven-ounce baby and beating all of the odds. This is an incredibly moving account of one mom who has to test all of her limits and push herself farther then she ever thought possible. ~ Steph 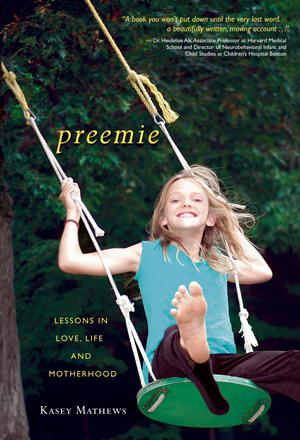 In her early thirties, Kasey Mathews had it all: a loving husband, a beautiful two-year-old son and a second baby on the way. But what seemed a perfect life was shattered when she went into labor four months early, delivering her one-pound, eleven-ounce daughter, Andie.

The first time Kasey was wheeled into the Neonatal Intensive Care Unit (NICU), nothing prepared her for what she saw: a tiny, fragile baby in a tangle of tubes and wires. All at once, Kasey was confronted with a new and terrifying reality that would test the limits of love, family, and motherhood.

In this riveting, honest, and often humorous memoir, Preemie chronicles the journey of one tiny baby’s tenacious struggle to hold on to life and the mother who ultimately grew with her. From hospital waiting rooms to the offices of alternative practitioners, from ski slopes to Symphony Hall, Kasey tries to make meaning of her daughter’s birth and eventually comes to learn that gifts come in all sizes and all forms, and sometimes… right on time.

To learn more about Kasey Mathews and to read her blog, visit www.kaseymathews.com.