Nancy O’Dell: I Am A Big Believer In Explaining Things To Kids

Entertainment Tonight correspondent Nancy O’Dell has sure been one busy mama! In addition to producing and hosting the HGTV show Celebrities at Home, she is also gearing up to release the Santa’s Big Premiere storybook for her popular Little Ashby: Star Reporter app. 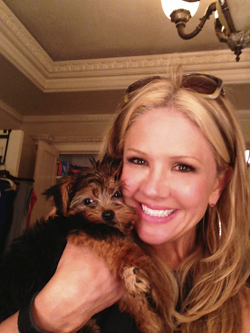 Nancy chats with Celebrity Baby Scoop about how her six-year-old daughter, Ashby, “loves” the app and “thinks it is pretty awesome” that it is named after her. She also reveals that her daughter and stepsons, Tyler and Carson, consider her a “softie” and shares her plans to host the Rose Parade on HGTV New Year’s Day!

CBS: What has the response been to the Little Ashby: Star Reporter app, with a portion donated to the Muscular Dystrophy Association, so far? Do you have ideas for the next Little Ashby storybook?

NO: “The response to the kids’ educational app has been so exciting. It is a project so dear to me, because it involves kids and teaches them about all kinds of good stuff!  I love hearing from parents who say their children have so much fun with the app and, yet, they are  learning at the same time. I also see how much my daughter loves the interactive app.

Little Ashby: Star Reporter – Santa’s Big Premiere is available again now on iTunes for the upcoming Holiday (www.LittleAshby.com). It follows little reporter Ashby, named after my daughter, on her journey to find the real meaning of Christmas. She learns all kinds of facts along the way and a moral lesson at the end. The app has so much for kids to interact with, and they learn so much while having fun! A portion of the app’s proceeds goes to MDA in honor of Goodwill Ambassador, Bryson Foster, who voiced one of the characters for me.”

CBS: What does Ashby think about the app and the fact that it’s named in her honor?

NO: “She loves the app! She plays and plays with it, because the app does all kinds of cool, magical things when you touch the screen of your device. I love when she tells me geographical facts she learned from the story. For example, we were watching Elf (yes, we start watching holiday movies early!) the other day, and all of a sudden she said, ‘Mama, The Northern Lights!’ She was right, because you do see the Northern Lights in Elf. She learned about the Northern Lights from the Little Ashby app, because Ashby the reporter sees them on her way to the North Pole.

She thinks it is pretty awesome that the app is named after her! When I was in the process of writing the story, I asked her what we should name the main character. She said, ‘Well, Ashby, of course!’ That was that.” [laughs]

CBS: Last time we chatted, you told us a bit about Ashby’s emerging independence, is she still asking to “make her own decisions”?

NO: “Yes, she is still telling me that she is six now and, therefore, she can make her own decisions! I try to explain why that is not quite the case yet, but she loves to use the phrases ‘I am a big girl now’ and ‘I’m all grown up.’ My favorite one from the other day is ‘I’m an adult now, mama.’ What?! My baby girl is so cute! Wait a minute, she might be mad I called her my baby girl.” [laughs]

CBS: Tell us a bit about your parenting style.  If we asked your kids what kind of a mom you are, what would they tell us?

NO: “they would tell you I am a ‘softie.’ My daughter totally has the ‘cute kid’ face down pat. Whenever she wants something, she gives me that sweet or sad look and I admit that works on me pretty much every time. My boys also know that when their dad goes out of town, that is the time to ask for things because Nommy (as they call me) is the softie!

I am also a big believer in explaining things to kids and not just saying ‘no’ without an explanation, because I think kids need to understand the reason behind telling them something. For example, my daughter didn’t want to take the time to put on her helmet the other day when riding her scooter. I didn’t just tell her, ‘Well, then NO scooter!’ Instead, I said, ‘Let me explain why I want you to wear your helmet. I love you so much and if you got hurt, it would just crush Mama. We must protect that precious little head of yours.’  To this, she replied, ‘I love you too, Mama’ and immediately put on her helmet.”

CBS: What else is on your plate or up next for you?

NO: “The ‘Little Ashby: Star Reporter -Santa’s Big Premiere’ story comes out as a children’s book this holiday season, so I am very excited about that! The story, which teaches facts and moral lessons, will be available on Amazon. I am so thrilled the story will be available in a whole other medium! I am also going to host the Rose Parade on HGTV New Year’s Day! That is always such a fun event to host and one my family loves to attend! Also, the show Celebrities at Home, which I produce and host, is currently airing on HGTV. If you want to see inside some fabulous celebrity homes, tune in!”