Lea Thompson: “My Kids Are My Friends”

Switched at Birth actress Lea Thompson stars as Rene in the UP Original Movie My Mother’s Future Husband, airing Friday, May 23rd at 9 p.m. EST on UP. In the movie, the former Back to the Future star plays a widowed mom whose daughter works to find her a new husband “as a sixteen year old would do it.” 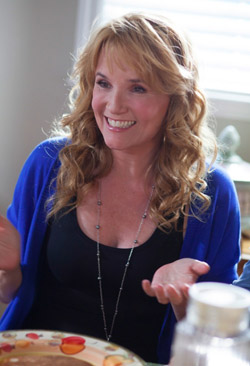 Lea chats with Celebrity Baby Scoop about her role in the “romantic and really sweet” movie. The mom-of-two, to daughters Madelyn, 23, and Zoey, 19, goes on to discuss the joys and challenges of working on the Back to the Future movies, her daughter Zoey’s acting career, and the advice she’s given her along the way.

LT: “It’s such a cool movie that is about a mother and daughter who are extremely close.  They are really good friends.  My character Rene’s husband died a few years before, which made her clingier to her daughter, Headly.  We have worked through grief and loss and now we are best friends. My daughter realizes if she is ever going to find a life, she will need to find me a life. The story is about trying to find a new spouse for me as a sixteen year old would do it, and it’s not a perfect process.  She finds about her own ability to find a cool guy to be with.  It’s romantic and really sweet and, hopefully, it’s funny. Matreya Fedor plays my daughter and it’s unbelievable what a great actress she is. She’s so good.  I loved working with her.”

CBS: Considering you have two daughters of your own, can you relate to Rene and her relationship with her daughter Headly?

LT: Yes, I can!  It’s very similar in that I’m super close to them. There is always a lot of interesting and intense talk about whether kids should be your friends or not. It’s a very personal thing and it’s all about how you interpret the word ‘friend.’  My kids are my friends.  If your interpretation of a friend is someone you go out and drink with, that’s not my interpretation of friend, in this instance.  They are my friends in the sense that I really respect them as people, and I always have.  I tell them the truth when I think they’re being jerks or whatever.  I’m sure I hang around my kids more than they want to hang around me, that’s for sure.” [laughs]

CBS: We loved you as Lorraine Baines in the Back to the Future movies! Tell us about the joys/challenges of working on that trilogy.

LT: “You know, the joy is that it is still so beloved as a movie. It still resonates with people and it’s obvious people got something really profound out of it.  The difficult part of it was that it took so long; it took half a year to make each movie. That was hard. The make-up took a long time when they made me look old.  It’s really great that new generations, like grandparents, are showing grandkids the movie. It’s really a neat feeling.”

CBS: Do you still keep in touch with your costars, such as Michael J. Fox?

CBS: Do you think there would be any chance of a Back to the Future reunion show?

LT: “We’ll probably get together for a 30th anniversary, but I don’t think we’ll make another movie.”

CBS: Tell us about your two daughters Madelyn and Zoey.

LT: “Maddy is 22 and she is a musician, actress and writer.  She’s busy all of the time.  She’s making an album right now and she just had a movie come out called 50 to 1. She also wrote a movie called Fear of Spectacular Men and I’m trying to gather the money to make that movie.  My daughter, Zoey, was just the star of the Vampire Academy movie. She’s also auditioning and taking art classes. We’re all going to sing together at a benefit called ‘What A Pair’ on my birthday, May 31st, to raise money for breast cancer. We had our first rehearsal yesterday and it was really fun.  We’re going to have a great time.”

CBS: Tell us a bit about your daughter Zoey’s acting career. Did she catch the acting bug quite young? Did you discourage or encourage her to follow that path?

LT: “Kind of, but I didn’t let her start acting until she was fifteen.  I couldn’t take driving her around and I just wanted her to be older. They are both really good actresses.  I work with them a lot on their auditions and stuff like that, which is a really fun way to spend time with your kids. It’s fun to have something to do and actually accomplish something.”

CBS: What advice have you given her along the way?

LT: “All kinds of advice.  Mostly about ensuring that she enjoys the process and not just the results, because life goes by so fast and it’s important to have a good time working.”

CBS: What’s up next for you?

LT: “I’m shooting season 3b of Switched at Birth on ABC Family and I hope to do more directing of these shows. I also hope to direct the movie Fear of Spectacular Men.  I have a small part in the movie Left Behind, which should come out at the end of summer, and I have another movie called The Trouble with The Truth on Video On Demand, HULU, Netflix, and all of that.  I also have another movie called Ping Pong Summer that will come out in the fall.”