Jewel On Motherhood And Learning ‘The Balancing Act’

Singer and songwriter Jewel has sure been one busy mama! She recently performed during the Academy of Country Music Awards’ Lifting Lives Moment to benefit ConAgra Foods’ Child Hunger Ends Here Campaign. She is also set to play June Carter Cash in the Lifetime Original Movie Ring of Fire, coming out this May. 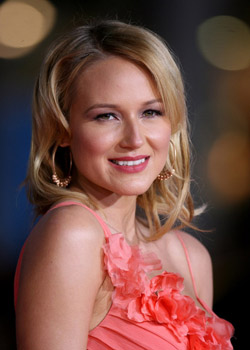 Jewel opens up to Celebrity Baby Scoop about her son, Kase, 20-months, who went on his first “road tour,” her involvement with Conagra and the cause to end child hunger, finding a balance between being a mom and having a creative outlet, and her Mother’s Day plans.

CBS: Tell us about your partnership with ACM Lifting Lives®. How did you get involved with the organization?

J: “I was the spokesperson for ConAgra Foods last year. Conagra‘s initiative is to bring awareness to end child hunger, and they did this by partnering with the ACM. They have songwriters and artists write songs in different formats, such as a country song or a pop song, which are then used in the commercials. Last year, I sang a song for the campaign and Little Big Town performed it for the ACM Lifting Lives moment. This year, another girl wrote the song and I performed at the ACM Awards.”

CBS: How did you prepare for your performance at the Academy of Country Music Awards?

J: “I performed a medley of my song Hands and this other song. I’ve prepared in all sorts of ways. I had to work on the medley, work out the keys, and practice on it to make sure I was ready to do it live.”

CBS: You will also star as June Carter Cash in the Lifetime Original Movie Ring of Fire. Please tell us about your experience.

J: “It was a lot of fun to play June Carter Cash and bring attention to her life, instead of her being just known as the ‘woman behind the man.’ She was a comedian and a film writer in her own right. It was a great role for me to get to play, and it is not often that you get such challenging and dramatic material given to you.”

CBS: What inspired you to take on such a prominent role?

J: “It seemed like a fun and difficult challenge. I had acted a little in the past, but it was nothing to this degree. I wanted to challenge myself and the movie was something I was able to do with the baby. The baby was quite young when I did this, maybe seven or eight- months-old, and I was also breastfeeding at the time. They let me have Kase on-set and I was able to keep breastfeeding, be a mom, and do something creative. It was sort of a win-win for me.”

CBS: How are you balancing motherhood with your work on the film and your other projects?

J: “I really wanted to give myself the opportunity to learn that ‘balancing act.’ I had friends that went back to work quite early and they really regretted it, so I tried to learn from them. I pretty much gave myself a year-and-a-half off. This popped up when Kase was only 9-months-old, and I wasn’t sure what it would be like because I hadn’t worked at all with my baby.

I think all mommies feel those pangs of guilt over doing anything except for staring at their babies. That was my first step into learning that balancing act. I felt really lucky that I had a job where I could bring Kase, let him take naps in the movie trailer, and really be with him. A lot of it just comes naturally, because the mother instinct you have with your child is so strong.

Before having Kase, I normally would never ask to take a break while on a movie set. However, I had no problem doing this if Kase was hungry. Things like that were kind of new, and now I’ve just been easing back into it. I feel really grateful that I have a job where I am able to bring him with me.

He came with me on the road for my first tour and I really enjoyed having him with me. We went to children’s museums during the day and I put him to bed at seven and then went onstage. It was fun. He never really knew I was singing at night because it happened while he was asleep. I got to be with him all day, which made me a little tired. I was going to bed on ‘rock and roll hours’ and waking up on ‘mommy hours,’ which tired me out.”

CBS: How old is Kase now and what does he like to do for fun?

J: “Kase is 20-months-old and he likes doing everything. Having a 20-month-old is fun because every day is a new exciting day; everything is thrilling for your child at this age. He’s been a really easy baby and I have been teaching him a bit of sign language. He doesn’t seem to have much frustration with his language…he is communicating very well and, luckily, he is a good eater.

He is a little trooper who enjoys feeding with us in the morning. My husband is a cowboy with a big ranch here, and Kase enjoys going on the tractor, feeding the cows, and giving the horses hay in the mornings.”

J: “Gosh, I have no plans yet. I just realized it’s coming up so soon. In regard to what Mother’s Day means to me, my mom left me when I was 8-years-old so I never really celebrated it. As a kid, I remember giving my dad a card on Mother’s Day because he was pulling double duty. Now that I’m a mom, Mother’s Day has taken on a new meaning. It’s really sweet and I look forward to celebrating more Mother’s Days as my son gets older. I haven’t really gotten any Mother’s Day gifts yet, but when the baby was really little my husband gave me my first Mother’s Day card that was really special.”

CBS: What do you have planned this summer? Any fun family trips?