With the Halloween season upon us, CelebrityBabyScoop is getting into the spirit of dressing up. 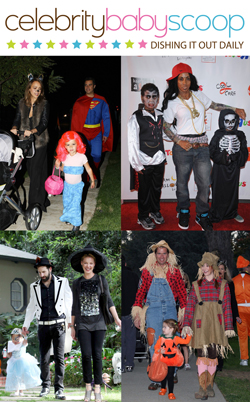 And what better way to celebrate than by looking at our favorite celebrity kids in their spook-tacular costumes! From Neil Patrick Harris‘ festive family-of-four, to Alyson Hannigan‘s pretty lil’ pumpkin, to Amy Adams and her cute kitten, let’s take a look at last year’s best Halloween costumes in Hollywood.

The family-of-four dressed up with a Peter Pan theme, with NPH going as Captain Hook, his partner David Burtka as Peter and their twins as Smee and Tinkerbell. What a great idea!

Alyson Hannigan and husband Alexis Denisof love getting dressed up at Halloween. Last year, they dressed as a scarecrow couple alongside their sweet daughter Satyana who went as a pumpkin.

Jessica Alba and husband Cash Warren got festive with their two daughters, Honor and Haven, last Halloween night. Dressed in costumes, the family-of-four were seen trick-or-treating in their Pacific Palisades neighborhood.

Cash looked great as Superman, while Jess wore a cute cat outfit. But Honor stole the show in her Princess Ariel costume.

Britney Spears and her family posed for a festive picture in London, England last Halloween. The pop superstar shared a photo while on tour, looking amazing in a Femme Fatale outfit alongside her sweet sons, her mother Lynne and beau Jason Trawick.

Jayden James looked adorable as Batman while Sean Preston was too cute in his ninja outfit. Grandma Lynne sported a witch costume, while Jason opted for his everyday look. “Loved celebrating Halloween in Londontown with my family!” Brit tweeted.

New mom Ali Larter and her baby boy Theodore were a perfect pair as they headed to a Halloween party last year at a friend’s house dressed as bumble bees. Cute as can bee!

Tori Spelling and husband Dean McDermott are parents to four kids. Last year, the proud mom took to Twitter to share a cute photo of their oldest kids, Liam and Stella, all decked out in their Halloween costumes.

“This year, Liam chose to be a Ninja Transformer and Stella is a Darling Witch,” wrote the mom-of-four.

Grey’s Anatomy alum Katherine Heigl and husband Josh Kelley got into the Halloween spirit last year as they took their adorable daughter Naleigh to a party in Los Angeles, Calif.

While the couple looked great in their costumes, Naleigh melted our hearts in her pretty princess outfit.

The mom-of-four got right into character, posing just like the highly-fertile rapper. Starting with his trademark dreadlocks right down to the teardrop tattoo on his face, Holly rocked it alongside her costumed sons Robinson and Roman.

The family-of-three looked great dressed up as Fred, Wilma and Pebbles Flintstone.

Sweet baby Aviana was in costume for her trip to the pumpkin patch with her parents Amy Adams and Darren Le Gallo last Halloween, pairing a leopard print suit and ears with a black tutu. What a cutie!