Have Babies Will Travel

I am not exactly sure what type of drug I was on when I agreed to a five day trip with the hubby, 6 children under 13 and twin newborns.  Not only would we be at a beach (yikes all those children and water!) but we would be staying in a rustic old cabin. (I have never been an outdoorsy type) and then there is the small issue of the Thatcher and Tanners schedule – okay earth muffins stop right there!  My first 6 children really never had such strict schedules.  They led the easy life of being breastfed on demand, sleeping in my arms, and having their every wish and demand met when and where they wanted.  The twins however, do not have such luxury.  I realized very quickly after they were born that twins are much different than singletons and for my own sanity a schedule was a necessity.

I knew right from the get go that it was going to be impossible to keep Thatcher and Tanner on their regular schedule but there were a few things I knew I could do to help them from going completely baby crazy.

Timing is everything – the one advantage of being formula fed for most feedings is that it is much easier to feed babies when traveling in a vehicle. My twins have a milk and soy protein allergy so they have to be fed a special formula as this is all they can tolerate. (For the record they are breastfed as I have taken all dairy products out of my daily menu but they don’t get enough from just me).  This made it easy to feed them on our drive there keeping them on the same feeding schedule.

Bring on the crib! Okay well I didn’t bring their crib but I did bring along the playpen and their First Years Close and Secure Sleepers that they sleep in inside their crib.  This made it more home like for them as they sleep in these every night so they were not suddenly in a whole different bed. 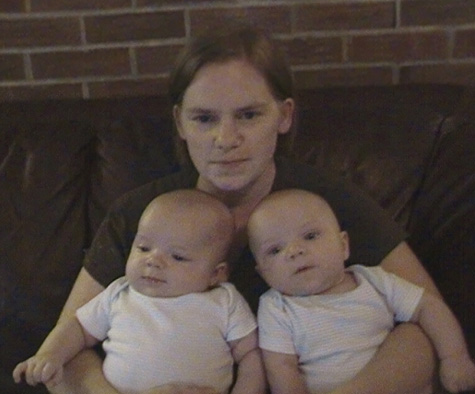 Bed time routine – except for the actual time they went to sleep I tried to keep their routine the same as I do every night.  This was a bit harder because they were not in a separate room in the cabin.  However, our house is always loud so they were used to the noise level.

Wake up time – arggg this is the worse!  Now that school is out we don’t have to wake up so early, yet this is what the babes are used to it so I am sticking to it. Summer vacation is only 2 months and then it is back to early mornings so there is no point in letting them get used to sleeping in and then having to change that again. Unfortunately this means no sleeping in for me.  Actually who the hell am I kidding?  I haven’t slept in for 13 years.

Attention all customers – that’s right parents I don’t care where you are planning your vacation but with as many children as I have there must be a store nearby. Case and point.  A few days before our trip the hubby and I bought a case of diapers at Costco.  Huggies is the brand we have been using so that is what we bought. Well on the second day of our trip Thatcher and Tanner suddenly decided that they were going to take the nastiest of baby craps.  I am talking poopey diapers that you only read about in horror stories.  The explosive ones if you will.  Needless to say the baby poop exploded right out of the diapers.  I was shocked.  I didn’t usually have such issues with their diapers.  As I lay in bed trying to sleep later that night I kept thinking about the whole diaper situation (well what else would you be doing at that time of night?) then suddenly it all made sense because things like this only make sense in the middle of the night of course.  The box we bought at Costco was Little Movers, NOT Little snuggles like we usually buy.  Of course the Little Snuggles are more expensive, but I suppose you pay the price in order to hold in the explosive baby craps.  Thankfully there was a Walmart near the resort we were at so we went shopping for the Little Snuggles diapers.  Sure enough no more explosions took place.

Wildberry – oh wait that was for me.

So what do you do to keep your baby or older children’s routine on track when you go away?  What is the worse thing you have done?