CelebrityBabyScoop wishes a Happy Mother’s Day to some of our favorite celebrity moms! 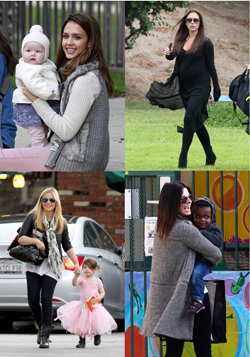 From Sarah Michelle Gellar‘s frequent Starbucks trips with Charlotte, Jennifer Garner‘s park playdates with the Violet and Seraphina, to Alyson Hannigan‘s Santa Monica strolls with Satyana, we love seeing our favorite celebrity moms out and about with their gorgeous kids!

“Charlotte is my best friend, and any free time I have, I want to spend with her,” the proud mom gushed. “But while it’s easy to forget yourself, I can’t define myself as only Charlotte’s mother—one day, she’s going to be an adult, and then where am I?”

And it sounds like SMG definitely deserves our top honor – she’s already taught baby Charlie to love her greens!

“We’ve already taught her to love healthy food,” the mom-of-one shared. “We took her to sushi on Saturday night, and everybody couldn’t believe what she inhaled. I think it’s important at a young age to enjoy different tastes. And we make this green juice for her. It’s basically everything but the kitchen sink. We go to the farmers’ market and buy everything and just put it in the juicer: kale, Swiss chard, carrots, celery. You name it. And now we’ve all started drinking it, and we’ve all been healthier.”

The hands-on mama recently gushed about her adorable and hilarious girls.

“You know how once you have kids you never ever pee by yourself again? At least one of them is always in there with you at all times,” Jen shared. “So the other day… [Violet] is in there with me and all of the sudden she went, Oh Mom, we have to have a talk…She said, ‘Mom, your bottom has gotten so big that your panties don’t even begin to cover it.’ I said, ‘It’s called a thong, you wear it when you’re a grown up.’ She was like, ‘Uh, that is so gross!”

“There are far too many things to count,” Angie said on the joys of motherhood. “But everything that matters in life has to do with being a parent.”

While she’s had a colorful past, the actress said she’s honored to be considered a role model.

“I was such a punk for so long, you can’t imagine you’d be anybody’s role model,” she said. “I’m very grateful that I’ve had the opportunity to do some things that have allowed me to be a role model. I hope I’m [a role model] for my children, and especially for my daughters.”

How I Met Your Mother star Alyson Hannigan, 37, and husband Alexis Denisof are expecting their second child this summer. The couple, who costarred in Buffy the Vampire Slayer, are already parents to 3-year-old daughter Satyana.

“There’s so many in a day,” Alyson told Celebrity Baby Scoop of cherished moments with her daughter. “It’s hard to choose any of them, but they’re all so special. I love her perspective on life and I love getting to be a part of her world. She’s just such a sweet, sweet person and I love the things that come out of her mouth. She’s just so full of personality and so lovely. [Motherhood is] just the greatest thing ever!”

Jessica said motherhood “changed everything” and helped her gain perspective.

“I felt completely different [after becoming a mom],” Jess said. “I really came into myself as a person. Before, I was always working for my identity. And then you take the focus off of yourself. I was probably-definitely-a bit of a narcissist. When you are young and an actor and driven, it’s a bizarre state of mind to be in at times. I was so focused on things that didn’t matter at the end of the day. Now I have what I do for a living in perspective. Working was everything to me, my entire identity, and once I got to step away from it, everything changed.”

Grey’s Anatomy star Ellen Pompeo, 42, and husband Chris Ivery welcomed their first child, daughter Stella, in September 2009. The TV star has opened up about the joys – and challenges – of being a working mom.

“It is challenging,” Ellen said of juggling motherhood and her career. “You know, I have my days where I feel really guilty that I’ve been here every day if I have to work a lot. But the truth is I’m in a very blessed situation, I am so lucky. First of all, I am so lucky to live in a country where a girl like me can make this kind of living, achieve her dreams and reach her goals. And I don’t think anywhere else in the world can girls have the freedom that we do here to have these amazing careers and be mothers.”

“He’s the best thing that ever happened to me,” the new mom gushed of her beautiful baby.

The model mom has become an outspoken advocate for breastfeeding since welcoming her first child.

“Having children is the hardest thing I’ve ever done,” Gwen said. “No one could have prepared me for how awesome it is and how hard. And having two boys – there’s a lot of energy.”

The singer-turned fashion designer joked that her daughter doesn’t fall too far from the tree.

“We went in to Prada yesterday and she loved it,” Posh said. “It was if she was saying, ‘Mummy I’m home!’ “

On a more serious note, Victoria has also admitted that juggling four kids and her booming fashion career is “tough.”

“I’m a working mum,” she said. “Harper’s not sleeping that great, and I’ve been taking Skype business calls throughout the night too because of the collections. I’m up with the baby as all mums are and I wouldn’t have it any other way. There’s not a team of people doing it for me. And then people want to say I look crap. Well, I’m a working mum, so give me a break,” she said. “I have a lot on my plate. I’m not going to lie about it, I’m tired. I’m really tired but I’m also very happy with my life. I’m basically just like any woman who’s working and has lots of children – it’s tough.”

The road to motherhood wasn’t easy for Academy Award-winning actress Sandra Bullock, 47. While she adopted a beautiful boy named Louis in January 2010, her marriage to bad boy Jesse James ended only two months later after reports of infidelity surfaced. Although her life seemed tumultuous, she only had one thing on her mind.

The single mom recently gushed that her 2-year-old tot is “probably the best baby in the world.”