CelebrityBabyScoop Takes a Look at 10 Celebrity Moms Pregnant Over 40 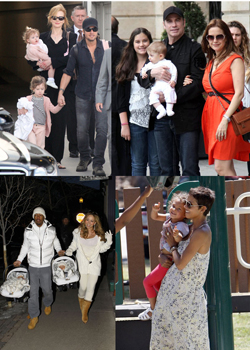 Forty is the new thirty!

Whether they’re conceiving the old-fashioned way or getting help from a fertility specialist, more and more celebrities are finding their 40’s to be fertile. From Uma Thurman, to Tina Fey, to Céline Dion, to Mariah Carey, take a look at 10 celebrity moms pregnant over 40 from CelebrityBabyScoop.

The latest Hollywood star to announce a later-in-life pregnancy is actress Uma Thurman. On Monday, the 41-year-old actress confirmed that she’s expecting her first child with financier Arpad Busson.

This will be the third child for Uma, who is already mom to daughter Maya, 13, and son Levon, 10, with ex-husband Ethan Hawke.

At 42, singing superstar Céline Dion announced that she and her husband René Angelil, then 68, were expecting twins. The French-Canadian songstress, whose previous IVF attempts had failed, opened up about the exhausting year-long endeavor.

“I feel like I’ve been pregnant more than a year,” Céline said. “I never gave up. But I can tell you that it was physically and emotionally exhausting.”

On October 23, 2010, the My Heart Will Go On singer gave birth to fraternal twin boys, Nelson and Eddy. The couple are also parents to 11-year-old son René-Charles.

Academy Award-winning actress Halle Berry gave birth to her only child, daughter Nahla, when she was 42. Nahla’s dad is Berry’s ex-boyfriend, model Gabriel Aubrey, with whom she is currently embroiled in a bitter custody battle over their now 3-year-old daughter.

With regard to becoming pregnant in her 40’s, Halle said,

“When I looked at the stick and saw I was pregnant … I was so happy. I thought I knew love before, but I never knew anything like this.”

It was baby bumps galore on the set of 30 Rock! Jane Krakowski wasn’t the only over-40 mama-to-be at the popular TV show. The show’s creator/writer/star Tina Fey delivered her second child, daughter Penelope Athena, in August 2011 at age 41. The SNL alum chatted about having her second baby later in life.

“I went for my annual checkup and, tired of carrying this anxiety around, burst into tears the moment she said hello,” the writer and actress shared in her memoir, Bossypants. “I laid it all out for her, and the main thing I took away from our conversation was the kind of simple observation that only an impartial third party can provide: ‘Either way, everything will be fine,'” wrote Tina.

In her book, Tina also admitted that she was “stricken with guilt and panic” every time her daughter, “the only child in her class without a sibling,” would say, “I wish I had a baby sister.”

“Do I look like someone who should be pregnant? I look good for 40, but I have the quaggy jawline and hollow cheeks of a mom, not a pregnant lady,” Tina shared. “What’s so great about work anyway?,” she wrote. “Work won’t visit you when you’re old. Work won’t drive you to get a mammogram and take you out after for soup.”

A Beautiful Mind actress Jennifer Connelly – who met hubby Paul Bettany on set of the award-winning film – gave birth to her third child at age 40. The Academy Award-winning actress – who was already mom to sons Kai and Stellan – welcomed the latest addition, baby Agnes Lark, in May 2011 at their home in New York City.

Before welcoming her daughter, Jen shared her family’s excitement about the pregnancy.

“This is the third,” she said. “We like to take our time. It’s great, they’re very excited. We’re all really excited. Paul was ready from the get-go. We’ve sort of been putting it off, so it seemed to be time. And it’s good, I’m feeling great.”

After months of baby bump speculation, voluptuous vocalist Mariah Carey and her husband Nick Cannon confirmed that the pregnancy rumors were true. But the path to motherhood wasn’t exactly a smooth one for the R&B singer, who had fraternal twins Monroe and Moroccan at age 40 via C-section in April 2011. The Grammy Award-winning singer said that enduring the emotional trauma of a miscarriage before she became pregnant with her twins was “really tough” and inspired her to change her lifestyle.

In true diva form, Mariah dished on her “awful” pregnancy and her “not-so-amazing” post-twins body.

“It has been a rough road,” she said just three months after welcoming the twins. “I was so uncomfortable. Pregnancy with twins is different than anything. They were always saying to me, ‘It’s all worth it.’ Yeah, it’s easy for you to say when you’re not the one whose feet are this big! It turned into a really difficult time.”

But at 40, Nicole gave birth to her first biological child, daughter Sunday Rose, in July 2008 with her country singing superstar hubby Keith Urban. The high-profile pair didn’t stop there — in December 2010 they welcomed another daughter, Faith Margaret, who was delivered via gestational carrier.

“Having given birth and then being there to see my child born in that way, I felt so much love for our surrogate, gestational carrier,” the actress said.

When opening up about her “roller-coaster ride with fertility,” Nicole revealed,

“Anyone that’s been in the place of wanting a child knows the disappointment, the pain and the loss you go through,” Nicole shared. “Struggling with fertility is such a big thing and it’s not something that I would run away from talking about. We were in a place of desperately wanting another child and I couldn’t get pregnant,” she said tearfully. “I get emotional just talking about it, because I’m so grateful.”

At the age of 48, actress Kelly Preston gave birth to her third child, son Benjamin.

“We had been trying for quite a few years, and then of course there was a time when we weren’t, and then we started trying again,” Kelly said. “When I found out I was pregnant, I was floored. I’d snuck out of bed and then came back and woke Johnny up in bed. We both started crying. It was wonderful.”

Kelly and husband John Travolta are also parents to 11-year-old daughter Ella. The high- profile couple lost their son Jett, who was just 16 years old when he died in 2009.

Puss In Boots star Salma Hayek had her only child, daughter Valentina, at the age of 41 with her French billionaire hubby François-Henri Pinault. The actress opened up about her pregnancy.

“People tell you, ‘You look gorgeous,’ when you are pregnant,” Salma said. “You are like a swollen whale and never looked worse in your life. And somebody goes, ‘You’re glowing.’ They don’t have the courage to tell you how bad you look.” With regard to becoming a mother later in life she said, “Motherhood is not for everyone. It is for me, but there’s no reason women should feel rushed to have a child.”

The Kids Are All Right star Julianne Moore gave birth to her daughter Liv at the age of 42. The 51 year-old actress also has a 14 year-old son, Cal, with her husband, director Bart Freundlich.

On having children later in life, the famous redhead said,

“That was the one thing I knew I would do, that I would have children,” Julianne said. “And it was a pretty acute desire. The funny thing is I was determined to have a baby by the time I was 36. My son was born the day after my 37th birthday. He was three weeks late. It was like the universe was laughing, saying, ‘You see, you can’t control things.’ “