CelebrityBabyScoop Takes a Look at 10 Celebrities Who Give Parenting Advice

Who do you turn to for parenting advice? Your own mother, your friends or other family members? 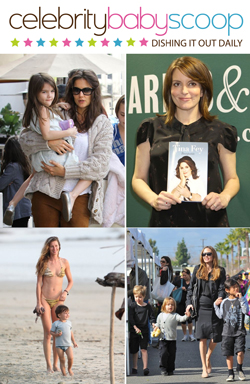 Or maybe you look to celebrity parents for their thoughts on parenting? Angelina Jolie advises parents to let their children “express themselves,” Tom Cruise says he doesn’t like to say “no” to his little girl, while Gisele Bündchen feels all new moms should be legislated to breastfeed. Take a look through our list of 10 celebrities and their top parenting advice.

Academy Award-winning actress Angelina Jolie and her longtime love Brad Pitt are parents to six kids: Maddox, 10, Pax, 8, Zahara, 7, Shiloh, 5, and 3-year-old twins Knox and Vivienne. And although they have such a big brood, their 5-year-old sure knows how to make headlines with her tomboy image!

Angle has said that Shiloh is “fascinating,” and elaborated on the fact that her daughter dresses “like a little dude.”

“I would never be the kind of parent to force somebody to be something they are not,” Angelina said. “I think that is just bad parenting…. Children should be allowed to express themselves in whatever way they wish without anybody judging them because it is an important part of their growth.”

Dawson’s Creek alum Katie Holmes and husband, Mission Impossible star Tom Cruise, have a 5-year-old fashionista on their hands! While everyone around her is bundled up in warm winter sweaters or coats, their daughter Suri is often seen with bare arms and legs.

Katie came clean about Suri’s lack of weather-appropriate attire, admitting it can be “embarrassing.”

“Recently, Suri and I were taking a walk and a fight got started because it was cold outside and she didn’t want to wear her coat,” Katie said. “My philosophy is, well, fine, because after a block of walking you’re going to ask me for your coat. So the pictures of her [without a coat in cold weather] are sort of embarrassing.”

Suri’s Top Gun papa has also weighed in on Suri’s much-talked-about fashion choices — such as her heels and lipstick.

“Listen, I believe that she (should wear) whatever she wants to wear,” Tom said. “She dresses herself. I want to encourage her creativity and her own self-expression. I think that’s important for the child’s own identity.”

The doting daddy went on to say that Suri is “so sweet” that it’s hard to say “no” to her.

Model mom Gisele Bündchen has been known to speak her mind! Seven months after welcoming her son Benjamin with husband Tom Brady, the Brazilian beauty declared that breastfeeding should be made mandatory by law.

“Some people here (in the US) think they don’t have to breastfeed, and I think ‘Are you going to give chemical food to your child when they are so little?’ I think there should be a worldwide law, in my opinion, that mothers should breastfeed their babies for six months,” Gisele said.

After a public uproar, the new mom clarified her thoughts about breastfeeding and the impact caused by her comment.

“My intention in making a comment about the importance of breastfeeding has nothing to do with the law,” Gisele wrote on her blog. “It comes from my passion and beliefs about children. Becoming a new mom has brought a lot of questions, I feel like I am in a constant search for answers on what might be the best for my child. It’s unfortunate that in an interview sometimes things can seem so black and white. I am sure if I would just be sitting talking about my experiences with other mothers, we would just be sharing opinions. I understand that everyone has their own experience and opinions and I am not here to judge. I believe that bringing a life into this world is the single most important thing a person can undertake and it can also be the most challenging. I think as mothers we are all just trying our best.”

Jennifer Garner became a mother-of-three earlier this week when she welcomed her third child, son Samuel, with husband Ben Affleck. She is one of our favorite celebrity moms year after year, and when she talks about role modeling for her daughters Violet, 6, and Seraphina, 3, it’s easy to see why she gets the popular vote.

“I try really hard to put my phone down [ever since] my daughter pretended to take something out of one of her little purses and was like, ‘I’ve got an email – hang on one second,'” Jen said.

The Alias alum went on to encourage mother’s to stop judging one another, and start supporting each other.

“I will tell you what I can’t abide – and I think the Internet has really created a space for it – women criticizing other women and mothers criticizing other mothers,” Jen shared. “It just makes me crazy, whether it’s between staying at home, going to work, how long you breast-feed, if you use formula. I feel like we should just assume everyone is doing the best they can. Women should take care of each other, not tear each other down. I would just like to see a mother who really believes that she has done it all so right, you know what I mean?”

While Michael J. Fox was once best known for his Back to the Future films, he is now widely known as an advocate for Parkinson’s Disease, a condition he was diagnosed with in 1991. The father-of-four often speaks out on the importance of family.

“Always be available to your kids,”Michael advised. “Because if you say, ‘Give me five minutes, give me ten minutes,’ it’ll be 15, it’ll be 20. And then when you get there, the shine will have worn off whatever it is they wanted to share with you. I’ve never gotten up to see something one of my kids wanted to show me and not been rewarded.”

The reality TV starlet opened up to Celebrity Baby Scoop about her biggest parenting pet peeves. And she had some strong advice for new parents.

Rebecca Romijn and husband Jerry O’Connell welcomed their twin daughters, Dolly and Charlie, in December 2008. The model mom opened up to Celebrity Baby Scoop about offering helpful hints to fellow parents of multiples.

“…Do I have advice yet? I don’t know, I feel like I’m so in the trenches that it’s hard to dole out advice yet,” Rebecca said. “I guess just to try and keep a sense of humor about everything. It’s really easy to get bogged down. You can’t even think straight half the time. I hope that once they start talking, that’s when I hope to cobwebs will start to clear from my head.”

The model-turned-actress added: “Actually the best advice I can give to parents of twins is to make time alone with your partner and make sure that’s a priority.”

Perhaps the best advice of all comes from funnylady Tina Fey. The mom-of-two encourages parents to pray and keep a sense of humor in the following excerpt from her memoir,Bossypants.

In a ‘prayer’ written for her elder daughter Alice, Tina shares a touching yet hilarious reminder for parents: have faith and try to have some fun. From her fabulous best-selling book, read Tina’s prayer for her daughter, for herself, and for parents across the globe:

“First, Lord: No tattoos. May neither Chinese symbol for truth nor Winnie-the-Pooh holding the FSU logo stain her tender haunches.

May she be Beautiful but not Damaged, for it’s the Damage that draws the creepy soccer coach’s eye, not the Beauty.

When the Crystal Meth is offered, May she remember the parents who cut her grapes in half And stick with Beer.

Guide her, protect her when crossing the street, stepping onto boats, swimming in the ocean, swimming in pools, walking near pools, standing on the subway platform, crossing 86th Street, stepping off of boats, using mall restrooms, getting on and off escalators, driving on country roads while arguing, leaning on large windows, walking in parking lots, riding Ferris wheels, roller-coasters, log flumes, or anything called “Hell Drop,” “Tower of Torture,” or “The Death Spiral Rock ‘N Zero G Roll featuring Aerosmith,” and standing on any kind of balcony ever, anywhere, at any age.

Lead her away from Acting but not all the way to Finance. Something where she can make her own hours but still feel intellectually fulfilled and get outside sometimes And not have to wear high heels.

What would that be, Lord? Architecture? Midwifery? Golf course design? I’m asking You, because if I knew, I’d be doing it, Youdammit.

May she play the Drums to the fiery rhythm of her Own Heart with the sinewy strength of her Own Arms, so she need Not Lie With Drummers.

Grant her a Rough Patch from twelve to seventeen. Let her draw horses and be interested in Barbies for much too long, For childhood is short – a Tiger Flower blooming Magenta for one day – And adulthood is long and dry-humping in cars will wait.

O Lord, break the Internet forever, That she may be spared the misspelled invective of her peers And the online marketing campaign for Rape Hostel V: Girls Just Wanna Get Stabbed.

And should she choose to be a Mother one day, be my eyes, Lord, that I may see her, lying on a blanket on the floor at 4:50 A.M., all-at-once exhausted, bored, and in love with the little creature whose poop is leaking up its back.