Celebrity Couples on the Joys of Parenthood

CelebrityBabyScoop is taking a look at some of your favorite high-profile couples talk about the joys of parenthood.  From Angelina Jolie’s hope of being a good role model to Victoria Beckham’s wish for a manual on motherhood, let’s see what Hollywood parents have to say about their most important roles. 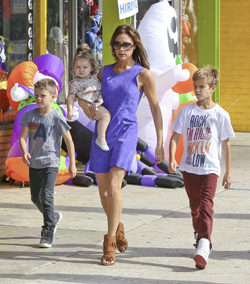 Power couple Angelina Jolie and Brad Pitt are parents to six children: Maddox, 12, Pax, 9, Zahara, 7, Shiloh, 6, and 4-year-old twins Knox and Vivienne. While the high-profile couple try to maintain a private life, they’ve been known to gush about their kids every now and again.

“There are far too many things to count,” Angelina said the joys of motherhood. “But everything that matters in life has to do with being a parent.”

While she’s had a colorful past, the actress is honored to be considered a role model.

“I was such a punk for so long, you can’t imagine you’d be anybody’s role model,” she said. “I’m very grateful that I’ve had the opportunity to do some things that have allowed me to be a role model. I hope I’m [a role model] for my children, and especially for my daughters.”

And Brad recently opened up about his favorite role — fatherhood. “It’s been a family type of year, a down-home type of year,” he said. “Mama’s worked more. And quite frankly I’ve really enjoyed it.”

According to the Golden Globe-winning actor, nothing brings him greater joy than his family-of-eight.

“You know, I don’t know that we’re finished,” he said of adding to their brood. “Those late nights are so fun when one of them’s up or those mornings when they get up and make pancakes or something. That’s what it’s about.”

The famous footballer said another child would be “amazing,” and he is often heard gushing about his big brood.

“She’s so beautiful,” David said about his baby girl. “There’s no more love for a daughter than there is a son, but it’s just different…I still think ‘Oh God, I can’t believe this, I’ve got a girl.’ And to see the boys with her it’s incredible. When they walk into the room, her little face lights up.”

And the singer-turned-fashion designer mama has also spoken about the joys of family life.

“Well, you know when you get a TV you get a manual? Well, there isn’t one for motherhood,” Victoria said. “I’m constantly trying to figure it out and questioning whether I’m doing it right. But I’m so proud my kids. They are very well-mannered. We’ve always been very strict with the kids. That’s the way David and myself were brought up. But they’re free spirits as well. They laugh. They joke. They have fantastic personalities. I love hanging out with them.”

Married for seven years, Jennifer Garner and Ben Affleck seem like one of the happiest couples in Hollywood with their three adorable kids: daughters Violet, 7, and Seraphina, 4, and 1-year-old son Samuel.

“It’s so important to me that they grow up with a healthy self-esteem, confidence and knowing just where to kick if they need to,” Jennifer said of raising her kids. “You want to set the best example you can for them in every way. You want them to grow up and be proud of you.”

During one of his many acceptance speeches this awards season for his mega hit Argo, Ben couldn’t help but gush about his seemingly-perfect family-of-five.

He added: “I want our daughters to break boundaries.”

Rockstar couple Gavin Rossdale and Gwen Stefani have been married for ten years and are parents to sons Kingston, 7, and Zuma, 4. The longtime couple have spoken about their happy family life.

“Kingston still likes the drums, but he’s into everything now,” Gavin gushed. “He’s always busy doing things. We’re just trying to give them lots of opportunities. Zuma is really into the guitar. If I’m playing he’ll come and jam with me – he’ll sit with me, it’s really fun. He moves his hands up and down. His positioning and charisma are amazing. He’s so relaxed, looks great!”

And Gwen has been open about the challenges and rewards of motherhood.

“It’s superfun being a mom, but it’s not what you think it’s going to be,” Gwen admitted. “And it’s really gradual. At first, your life is totally the same. You have this cute little thing that you get to drive around everywhere and you’re so proud and it’s amazing. And as they grow older, it really does start to change your life. Like, Oh, my God, they have school, they have to get through first grade, they have to learn to read.”