Best of 2012: Celebrity Babies Of The Year

There’s always reason to celebrate a baby’s birth. But when our favorite celebrities add to their families, we can get downright giddy! 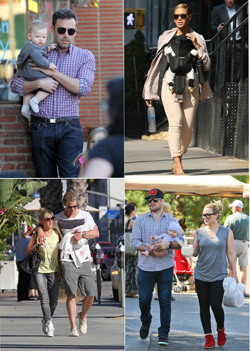 As we look back at the high-profile arrivals of 2012, we are overjoyed for new parents like Jessica Simpson and Eric Johnson. And we couldn’t be happier for Uma Thurman who welcomed her third child – Rosalind Arusha Arkadina Altalune Florence Thurman-Busson - this past year. Look through our list of 2012′s celebrity babies of the year.

R&B royalty Jay-Z and Beyoncé welcomed daughter Blue Ivy on January 7, 2012. The superstar couple released a touching statement to announce the birth of their first child.

“Hello Hello Baby Blue!” they stated. “We are happy to announce the arrival of our beautiful daughter, Blue Ivy Carter, born on Saturday, January 7, 2012. Her birth was emotional and extremely peaceful, we are in heaven. She was delivered naturally at a healthy 7 lbs and it was the best experience of both of our lives. We are thankful to everyone for all your prayers, well wishes, love and support.”

The Avengers star Chris Hemsworth welcomed first child, daughter India Rose, with his wife Elsa Pataky on May 11, 2012. The Snow White and the Huntsman actor said fatherhood has been smooth sailing so far.

“She’s been great,” Chris gushed of his newborn daughter. “She sleeps very well. Not out of any skill on my behalf, but my wife has been amazing.” The Aussie actor adds that fatherhood has already shifted his perspective: “Just her being here. It’s certainly taken all my focus and attention away from work — or what have you — but that’s the main thing on my brain right now. It’s wonderful.”

“He is so chill… He reaches when he sees me and he laughs a lot,” Jennifer said. “He thinks I’m super funny. What more do you want?”

E.T. star Drew Barrymore and husband Will Kopelman welcomed their first child, daughter Olive, on September 26, 2012. ”We are proud to announce the birth of our daughter,” the newlywedsannounced.

“I can’t wait until I have my children,” Drew said just weeks before welcoming baby Olive. “I love the idea that they don’t have to do something that they have no interest in, that they can do something completely opposite if they want to. I will be so surprised if they don’t want to do something involving food or wine or art, but I’ll be OK with it. I just want to build fun, great things for my family.”

Singer-turned-entrepreneur Jessica Simpson and fiancé Eric Johnson welcomed their first child, daughter Maxwell Drew, on May 1, 2012. And by all accounts, it seems the Fashion Star mentor has taken to motherhood like a duck to water.

“I am so in love with baby Maxwell,” the new mom gushed. “I want to cry every time I look at her. Motherhood is by far the best thing I’ve ever experienced.”

“Mother and baby are doing great,” the couple’s rep announced. “And Charlotte is VERY excited to be a big sister,” the rep added of their 3-year-old daughter.

“I gave birth to our son Noah Shannon Green on September 27th. He is healthy, happy, and perfect,” the Transformers star, 26, announced a few weeks after their son’s birth. “We are humbled to have the opportunity to call ourselves the parents of this beautiful soul and I am forever grateful to God for allowing me to know this kind of boundless, immaculate love,” she added.

Lizzie McGuire star Hilary Duff and former NHL star Mike Comrie became first-time parents to sonLuca Cruz on March 20, 2012. The singer-actress has opened up about the joys of new motherhood.

“There’s really no words to describe it,” Hilary gushed of motherhood. “It’s the most incredible thing every day. It softens you so much. I feel like a big mushy ball.”

“Both mom and baby are healthy and the entire family is thrilled,” the actress’ repannounced after baby Tennessee’s arrival.

“We are thrilled to have Duke in our lives and could not be happier parents,” the new mom gushed to Celebrity Baby Scoop. “Life with Duke is great – he has been a dream baby!”

And some more terrific tots that arrived into Tinseltown this year….