While in NICU the twins received the standard hearing screen tests as do all newborns.  They passed, they continued to thrive, they came home, I moved on best I could as a mom to 8 children.  As the twins were premature I didn’t expect milestones to come at the typical time and so I was patient.  But by the time my little guys were 8 months (6.5 corrected) I was concerned about Tanner.

Tanner was always happy and smiling but something wasn’t right.  He didn’t always respond when I called his name, and sometimes when he was upset he didn’t seemed to be calmed by my voice that much.  Thatcher was happy as well, and had begun to really babble.  If I spoke to him he tried to “Talk” back – Tanner didn’t – again he would just smile his adorable smile that melts my heart.

Everyone kept saying they thought he was fine and I was probably just worried about nothing.  A few weeks later he still wasn’t really babbling much so I decided to talk to our Paediatrician.  When I explained my concerns he didn’t hesitate.  Within a week Tanner was having his hearing tested.

I knew what the result would be before it was completed.  I was right.  Tanner was hearing nothing in his right ear.  This explained so much, and I actually felt relief in the fact that my instinct was correct.  He will now see an Audiologist in the next few weeks to determine if he is deaf in his right ear, or if there is some other medical problem that has caused him to lose his hearing in that ear.

Us busy mama’s seem to always have the correct instinct when it comes to our children and we are seldom wrong.  We know when something isn’t right even if everyone believes otherwise.  If you think there is a problem with your baby’s development do not hesitate to speak to your Doctor even if you think your concern is silly – because chances are you are most likely right. 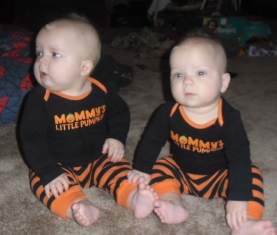