While pregnancy can be a joyous time, it can also present some odd symptoms and fears. 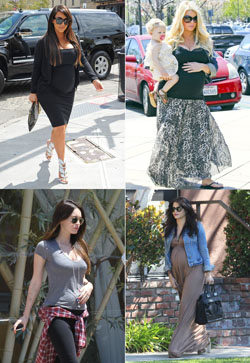 “Being pregnant is not as easy as my sister [Kourtney Kardashian] made it look or as my mom [Kris Jenner] has made it look,” she admitted.

As for her pregnancy cravings? “I’m craving carrots and ranch dressing,” she said. “I used to love sweets, I used to love chocolate, can’t even eat chocolate!”

“OK my fellow preggars ladies.. about these hormonal dreams,” she posted via Twitter. “Is it normal to fly on a magic carpet while presenting at Golden Globes?? Lol.”

Kristin Cavallari‘s birth plan didn’t exactly go as she had hoped when it was time to deliver Camden, her first child with Jay Cutler.

And when it came time to deliver her son, she didn’t want her football star hubby to see the birth. “I was like, ‘You’re going to be behind me. You’re not going to see anything,’” she said. “And the nurse was like, ‘Oh, no, no. He’s going to hold your leg. I was like, ‘Oh, no he’s not.’ She was like, ‘It’s different when it’s your own.’”

“When my water broke, I thought it would be like [gushing],” she shared.

Snooki added: “But I was just like, peeing my pants every two seconds. I didn’t know what was going on! I couldn’t control it, and I was like ‘I think my water broke.’ I was in labor for 27 hours, but I didn’t feel anything because I got the epidural.”

“The crazy thing is I never knew a wiener could make me nauseous,” Jessica quipped.

“I’ve got nothing to prove” by giving birth naturally, she joked in January. “I feel like, when I arrive at the hospital, I want a glass of whiskey, I want the epidural in my back and I want to get hit in the face with a baseball bat and wake me up when it’s over because I’ve seen the videos—and it looks terrifying.”

That being said, she loved pregnancy and said her “self-esteem has never been higher.”

“I look in the mirror and I think it’s the reverse body dysmorphia,” she added, “because I can understand what my shape is, but I see Brooke Shields. And it doesn’t make a lick of sense, but it’s something that the baby’s giving me hormonally makes me feel really giggly and happy.”

This is 40 star Megan Fox opened up about giving birth naturally to her son Noah Shannon.

“I was screaming for an epidural when Brian was driving me to the hospital because my water broke on its own,” the actress said of Noah’s September 27 birth. “It was level orange alert pain.”

With husband Brian Austin Green by her side, Megan (currently pregnant with the couple’s second child) said the pain was “horrific.”

“It hurts so bad,” she shared. “It was so intense. And I thought I was gonna be really tough and make it, I was gonna labor to like 8 cm . . . but the first contraction that I got was horrific!”

And it sounds like the pain left no time for beautifying pre-birth.

“I had wet hair so I was trying to blow dry my hair before I went to the hospital,” she laughed. “I didn’t want to go to the hospital with wet hair!”