5 Celebrity Moms On Explaining Their Colourful Past To Their Kids

We’ve all done crazy things in our youth! But what happens when mom’s past has been caught on tape, encapsulated in magazines, or documented all over the internet? 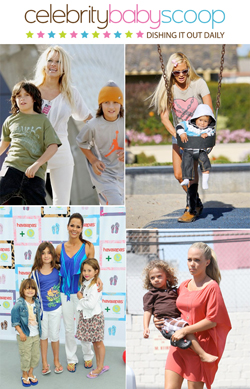 Kendra Wilkinson and husband Hank Baskett are parents to 2-year-old son “Little Hank.” TheKendra on Top star recently opened up to Celebrity Baby Scoop about talking to her son about her Playboy past one day.

“I’m not dreading the conversation because both my husband and I are proud of my past,” she said. “[Little Hank] actually already come across some [laughs], he just didn’t really know what it was yet. It’s better to be open than not, so I will be very open with him when the time comes. Openness and honesty is the best way to go.”

And when it comes time, Kendra will also be open to discuss her past alcohol abuse and sex tape.

“Oh yah! When it comes time,” she said of talking openly about her troubled past. “You can’t mark the date like, ‘When my son or daughter turns 10-years-old on a Sunday at 10 o’clock I’m gonna talk about sex with them.’ No, that’s the wrong that people do in America. People go too much by the book. I believe that is wrong and I don’t believe in going by the book. I believe in knowing your kids, know how they are being raised and educating them the second that it comes time. For sure, that’ll be the time to talk.”

Brooke Burke-Charvet and husband David Charvet are parents to Neriah, 12, Sierra, 10, Rain, 5, and Shaya, 3. The Dancing with the Stars host and CEO of Modern Mom is not concerned about explaining posing nude for Playboy to her four kids.

“My younger ones wouldn’t even know what Playboy is,” Brooke said. “My older daughters are too young to have that conversation right now. They know I was a model, and they like seeing the contrast of Mommy in sweats to being all glamorized. I don’t think any of my children are going to grow up being judgmental. Many respectable women in the industry have graced the cover of Playboy. So I don’t think it’ll ever be an issue or a problem or anything confusing for my kids.”

Pamela Anderson is mom to two sons – Brandon, 15, and Dylan, 14 – and she was forced to ‘fess up about the infamous home video showing her and the boys’ father, Tommy Lee, in their most intimate of moments.

The former Baywatch babe admits how she told her children about the sex tape after appearing in the film Borat.

Pamela also opened up about how her oldest son got in trouble at school for protecting her honor.

“My son got in trouble at school for beating somebody up,” Pamela said. “Well, not really beating somebody up. Just one of the counselors, who’s 18 or 19, made a rude comment about me to him. Brandon threw his Red Bull (drink) on him and then went after him and they had to peel him off him. Now I’m getting called into school. But I think when somebody says something bad about your mother, what are you supposed to do? It is hard when other kids are like, ‘I’ve seen your mom with her clothes off!’ I’ve tried to teach my kids I have no problem with nudity. Violence isn’t good but Brandon was really upset, he was shaking and crying and looking in my eyes. It’s so sad.”

Celebrity Rehab with Dr. Drew star Rachel Uchitel was once the face of 9/11 mourners, but years later her name became known as the “other woman” in reports of David Boreanaz and Tiger Woods’ infidelities.

Days before the May 15 birth of her first child, daughter Wyatt Lilly, Rachel opened up to Celebrity Baby Scoop about her troubled past, and not anticipating any issues for her daughter in the future.

“I moved on a long time ago and it’s odd to me that a lot of people haven’t,” she said. “People will still hear my name, an article will come out about me, I’ll see the negative spin on it and I’m not sure why. It was three years ago that my name was in the paper so much. I’ve actually never commented on anything and did my best to keep my head above water. But it’s tough when you have people judging you so harshly. I’ve moved on and I hope other people will too and see that I am doing my best to try and have a normal life.”

“No, not at all,” she said. “I think that people won’t be talking about it four years from now or ten years from now. I don’t see that happening.”