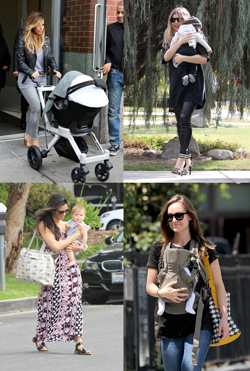 In celebration of moms everywhere, let’s take a look at Hollywood’s newest matriarchs who will celebrate their first Mother’s Day on May 11.

From Kim Kardashian, to Jenna Dewan-Tatum, to Olivia Wilde, to Fergie, look through our list of 15 star moms celebrating for the first time this year.

Congratulations are in order for Kerry Washington and Nnamdi Asomugha.

It’s a boy for Olivia Wilde and Jason Sudeikis.

The Her actress, 30, and the SNL alum, 38, welcomed their first child – son Otis Alexander – the proud new mom announced via Twitter on April 23.

Congratulations are in order for Teresa Palmer and Mark Webber.

The Warm Bodies star, 27, and her director husband, 33, welcomed their first child together, a son named Bodhi Rain, on February 17. The Australian actress took to Instagram to share the happy news.

“Thank you God for blessing us with the most divine gift of our baby son,” Palmer captioned a photo of her newborn clenching her left ring finger.

She went on to talk about their newborn’s chosen name.

“Bodhi means ‘Enlightened one’ Rain means ‘Abundant Blessings From Above’ and we chose Palmer as his last name as Marks son Isaac didn’t take his dads name either,” she said. “Thanks for all the blessings and love everyone :):) @likemark.”

It’s a girl for Kevin and Danielle Jonas.

The couple welcomed a baby girl named Alena Rose Jonas after about 8 hours in labor.

“#babyjonas is on the way!! Follow dreft for all the updates!!!!! It’s showtime #thisisnotadrill,” the excited father-to-be tweeted earlier in the day.

In a surprising announcement, the Love Actually actress, 49, gave birth to their baby boy named Bennett Armistead Schauer on January 8.

Baby Bennett is the first child for the couple who were wed in May 2009.

Double the congratulations are in order for Jennifer Love Hewitt, 34, and Brian Hallisay,

And that’s not all — the new parents also secretly tied the knot!

“Jennifer Love Hewitt and her husband Brian Hallisay are thrilled to announce the birth of their daughter,” their rep said. “Autumn James Hallisay was born on November 26.” A source adds that the couple “got married recently in private.”

It’s a boy for Morena Baccarin and Austin Chick.

The Homeland actress, 34, and her director husband welcomed their first child – a son named Julius– on October 22.

Born via home birth, Julius weighed in at just under 8 lbs.

Congratulations are in order for Jaime King and Kyle Newman.

The Hart of Dixie actress, 34, and her director husband, 37, welcomed a baby boy on October 6.

The proud new parents announced their son’s birth via Instagram. “Nice to meet you! #FATHER #IMADAD #BABYTIME @jaime_king is doing amazing! The most incredible feeling,” Kyle captioned an image of their baby’s hand.

It’s a boy for Heather Morris and Taylor Hubbell.

The Glee actress, 26, and her longtime love welcomed a son named Elijah on September 28.

The Fast & Furious 6 actress, 33, and her husband welcomed a son named Julian.

“Jordana Brewster and her husband Andrew Form are excited to announce the birth of their son, Julian Brewster-Form,” her rep announced. “They welcomed their son via surrogate. The parents are overjoyed.”

“She’s here, and we are in HEAVEN!!!” the singer tweeted. “Eisele Kaye, our beautiful angel, HAPPY BIRTHDAY!!!”

Congratulations to Evan Rachel Wood and her husband Jamie Bell who welcomed their first child – a boy!

The actress, 25, delivered her son child via home birth.

It’s a girl for Kim Kardashian, 33, and Kanye West.

“Kim had her baby,” a hospital source said. “She’s five weeks early. Kim got sick last night and had the baby early. They’re all doing great and amazing!”

Hollywood couple Channing Tatum and Jenna Dewan-Tatum, 32, announced the birth of their daughter on their respective websites.

Both parents posted, “Welcome to the World!” with the message: “Jenna Dewan-Tatum and Channing Tatum are thrilled to announce the birth of their daughter, Everly Tatum, who was born on May 31st in London. Sending love and light to Chan, Jenna, and Ms. Everly!”

Happy Mother’s Day to all the moms out there!