15 Bikini Bumps: Who Bared Their Bellies At The Beach? 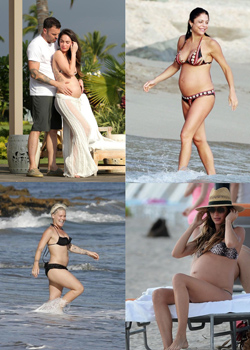 Proud of their pregnancy curves, celebrities love to bare their bumps in bikinis. Check out our gallery of high profile moms-to-be – including Megan Fox, Kim Kardashian, Jessica Simpson and Bethenny Frankel – in two-piece swimsuits.

Read below and see some of our favorite bikini bumps.

Hart of Dixie star Jaime King bared her baby bump in a bikini via Instagram in July. “Backyard summer with baby and father,” the actress captioned the photo Thursday, referencing her filmmaker husband, Kyle Newman.

Since announcing her pregnancy in May, the first-time mom-to-be has been keeping fans updated via Twitter. “Our baby has the best name: The Untitled Newman-King Project,” she joked.

While pregnant with her son Ace, Jessica Simpson tweeted a daring self portrait of her growing belly. “Bumpin’ and proud!” the blonde beauty wrote in December 2012.

In the revealing shot, the bare-faced Fashion Star mentor showed off her baby bump – and cleavage! – in a patterned bikini.

The singer-turned-entrepreneur was sharing on social media while vacationing in Hawaii. On Christmas Day, the fashion designer finally confirmed that she and fiancé Eric Johnson are expecting their second child by tweeting a photo of daughter Maxwell, then 8 months, sitting on the beach with “Big Sis” written in the sand.

When expecting her third child, Tori Spelling rocked her baby bump in a bikini on the beaches of Malibu in May 2011. Along with a white sarong, the reality TV starlet showed off her growing bump in a black bikini.

We were also able to sneak a peek at her new side tattoo with her wedding vows to hubby, Dean McDermott.

Just weeks before welcoming her second child, son Noah, Model mama Alessandra Ambrosio took to Twitter to share some pictures of her burgeoning belly on the beach and at her recent baby shower.

“So much fun at my little boy baby shower!!” she wrote. “Now just have to wait for him to arrive!!!” Proudly modeling her beautiful baby bump, Alessandra celebrated with friends and family in Florianopolis, Brazil.

While pregnant with daughter Haven, Jessica Alba showed off her growing baby bump in a bikini while holidaying in Cabo San Lucas, Mexico in May 2011. Alongside her then 3-year-old daughter Honor, the Valentine’s Day star was expecting her second child with hubby Cash Warren.

While pregnant with her daughter Willow, Pink rocked a mini baby bump in a black bikini on the beaches of Los Angeles in November 2010. The Grammy Award-winning singer and her husband Carey Hart confirmed pregnancy reports shortly after this photo was taken.

Just three weeks before Bethenny Frankel welcomed her first child Bryn, the reality TV starlet rocked a bikini while honeymooning with her then hubby Jason Hoppy in St. Barths, France in April, 2010.

The now estranged couple had just wed on March 28 in New York City and Bethenny went into labor early, welcoming their daughter on May 8.

Though Transformers star Megan Fox and her handsome husband, Brian Austin Green, kept mum on their pregnancy news, the brunette beauty debuted her burgeoning baby bump in a bikini during a romantic Hawaiian getaway in June 2012.

The photos showed Brian caressing his bride’s bare baby bump as they took in the beautiful view from their private terrace. The couple were celebrating more than just the baby on the way – they were vacationing in Hawaii, where they tied the knot, to mark their second anniversary.

After getting married on the French island of Corsica on July 31, 2010, Alicia Keys and Swizz Beatz were photographed honeymooning in Saint-Jean-Cap-Ferrat, France a few days later. The Grammy Award-winning singer had a baby on board and rocked her bump in a white bikini aboard the luxurious yacht.

After getting hitched on June 27, 2009 at the Playboy Mansion, Kendra Wilkinson and Hank Baskett were pictured on the beach during their honeymoon a few weeks later. The reality TV starlet was sporting a mini baby bump on the sandy beaches of St. Lucia.

New mom Kim Kardashian bumped it up in a bikini during her recent vacation to Greece.

While seven months pregnant with daughter North, the reality star proudly bared her burgeoning belly in a series of trendy two-pieces while soaking up the sun on the island of Mykonos, where she and her famous family spent several days in April 2013.

At 9 months pregnant, actress Minnie Driver was spotted strolling with her pregnant sister. The Good Will Hunting actress rocked a bikini on the shores of Malibu on August 25, 2008.

Matthew McConaughey and his crew spent Labor Day, 2009 at the beach. The hunky actor’s pregnant then girlfriend, Camila Alves, and their adorable boy Levi, then 14 months, were seen walking the shores of Malibu.

At 5 months pregnant, Camila showed off her growing baby bump in a long summer skirt and bikini top. The Brazilian beauty gave birth to the couple’s second child, daughter Vida, a few months later on January 3, 2010. They have since been married and welcomed another child, son Livingston.

During a December 2012 babymoon, Channing Tatum and Jenna Dewan-Tatum were photographed enjoying the sand and surf in St. Barts, France. The actress bared her growing baby bump in a bikini, while her shirtless hubby enjoyed some snorkeling.

The day before, we spotted the expectant parents taking a romantic stroll along the beach.

The handsome couple have since welcomed their first child, daughter Everly, on May 31, 2013.

Weeks before welcoming daughter Vivian, Gisele Bündchen rocked her bare baby bump in Miami Beach, Fla. in November 2012. Looking simply radiant in a leopard print bikini, a straw hat and aviator shades, the Brazilian beauty caught some rays with a pal at the beach.

The supermodel and her husband, Tom Brady, are also parents to son Benjamin, 3. The hunky quarterback also has a 5-year-old son, Jack, with ex-girlfriend Bridget Moynahan.

Who rocked their bikini bump the best?