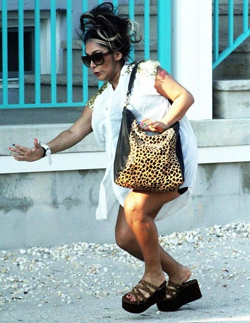 But some of our favorite high profile moms-to-be could not give up this wardrobe staple throughout their pregnancies. From Kim Kardashian to Kate Middleton to Jessica Alba, let’s take a look at 10 pregnant celebrity moms and their fancy footwear.

Just a month before welcoming her daughter North West, reality star Kim Kardashian stepped out for lunch with her momager Kris Jenner at Stanley’s in Sherman Oaks, Calif. on May 16. Wowing in a white dress, Kim looked lovely, yet swollen, in her heels.

Heels became quite the hot topic while Kim was expecting her first child. After tweeting, “I never thought I would ever say this… But I’m wearing flats today,” Kim was asked to elaborate.

“You know what, they actually hurt my back,” the expectant mom said. “I love high heels … Whatever makes me feel good, I want to wear. And I love wearing heels. I’m trying the flats, but we’ll see.”

One month before welcoming son George, Kate Middleton made an appearance in Southampton, England, on June 13 to name Princess Cruises’ latest ship, the Royal Princess.

The radiant mum-to-be, 31, walked the blue carpet in a $265 dalmatian print coat by Hobbs, accessorized with a black fascinator and black heels.

Reportedly pregnant Rachel Zoe, 41, stepped out with her son Skyler, 2, and husband Rodger Berman in Malibu, Calif. on July 2. After stopping by Desert Sun Nail Salon for a spa treatment, the couple took their tot to Bui Sushi for an early dinner.

The celebrity stylist went boho chic in a black ensemble and wedge heels.

“Being pregnant with Sky was really great actually,” she said. “Maybe the fact that I wore heels until I gave birth. A lot of people made fun of me for it. I was determined!”

One month before giving birth to son Ace, Jessica Simpson and fiancé Eric Johnson were seen arriving at Los Angeles International Airport on May 3. Eric carried their 1-year-old daughter Maxwell while Jessica was all smiles for the nearby paparazzi.

Two months before welcoming her son Lorenzo, Snooki took a tumble in her heels.

When Nicole “Snooki” Polizzi announced her pregnancy in March 2012, the pint-sized MTV star said, “I’m going to wear heels throughout. I’m 24, not 50!”

But while filming her hit show Jersey Shore in Seaside Heights, New Jersey on June 21, 2012 the expectant mom took a tumble in her platform sandals. Luckily, she wasn’t seriously injured.

“I feel confident in them, and I know I’m not going to fall, so until it feels very uncomfortable, I’m still going to rock them,” Snooki said earlier this month of wearing heels. “I’m only 24 and I’m pregnant — it doesn’t mean I need to be wearing flats and ugly shoes. I can still look good.”

Three months before welcoming her son Rocky, Buffy the Vampire Slayer star Sarah Michelle Gellar was photographed with her adorable daughter Charlotte, then 2, in Sherman Oaks, Calif. on June 16, 2012. The expectant mama looked lovely in a white summer dress and brown wedge heels.

Four months before welcoming son Camden, reality star Kristin Cavallari stopped by the Earth Bar to pick up a couple healthy drinks-to-go in West Hollywood, Calif. on April 11, 2012. The Hills alum was radiant in an orange mini dress and nude heels.

One month before welcoming daughter Haven, Jessica Alba was the picture of pregnant style yesterday as she attended an event at West Hollywood’s Jenni Kayne boutique with her then 3-year-old daughter Honor on July 10, 2011.

Dressed in a black skirt, brightly colored top and wedge heels, the Fantastic Four star seemed in great spirits as she chatted with friends before heading inside.

Did you wear heels during and/or throughout your pregnancy?